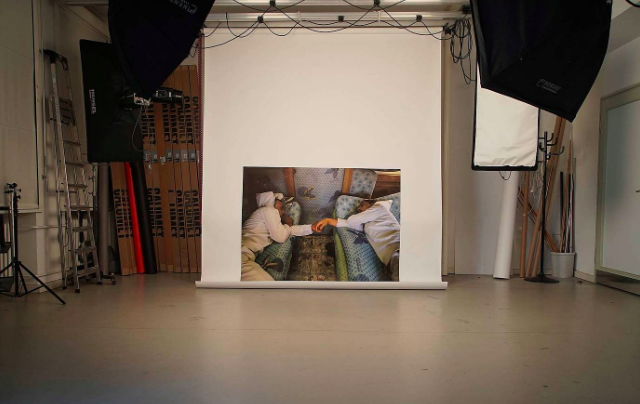 Jasmina Metwaly’s (b. 1982, Warsaw, Poland) most recent project centers on the cultural signification of military uniforms in the aftermath of the 2011 Egyptian revolution. The first work to grow out of this research, the installation titled Anbar (2019), is a three-channel video with accompanying textile components. Here Metwaly considers the uniform as a precursor to the paranoia and anxiety that descended on Egypt in the years following the overthrow of President Hosni Mubarak. The work is organized around three characters–a soldier, a tailor, and an activist filmmaker–who each demonstrate particular ties to the Egyptian military. The tailor, for instance, dressed Mubarak and his successor Abdel Fattah el-Sisi, as well as the late military leaders Gamal Abdel Nasser and Anwar Sadat. Metwaly suspends her three characters in distinct, nonlinear narratives that reveal "edits" or specific moments of revolutionary history not typically shown by formal news outlets. The work speculates on how uniforms confer power and serve as disguises for the ordinary civilians who enter the ranks of the military.
Tweet
Share