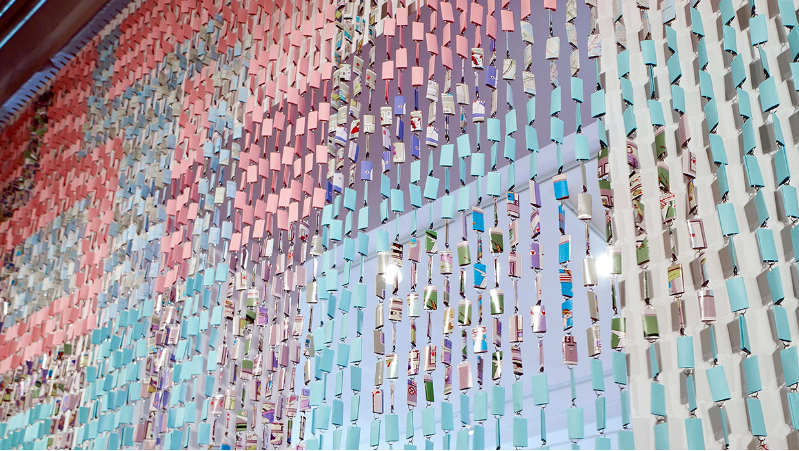 Mark Cottle: The Cost of Money

Neutra VDL House
2300 Silver Lake Boulevard Los Angeles, CA 90039
Oct 12, 6 PM - 10 PM — ends Nov 23, 2019
THE COST OF MONEY refers to the steep human price capital can exact, particularly from the most vulnerable populations, and at enormous expense to the environment.

Each plastic shopping bag represents a transaction, or cluster of transactions, the tangible residue of goods consumed. Sometimes the bags are folded, stored, and brought back for another round of purchases. More often, however, they are thrown away. They have, in fact, come to signify a culture of disposability.
These bags also index a myriad of smaller, more informal economies, operating beneath the surface of the larger one, such as corner shops and takeout joints run by family members (rather than employees) or staffed by recent immigrants. Available in bulk, by the kilo, bags are often sourced through various intertwining immigrant business communities.

THE NEUTRA VDL HOUSE resides at the nexus of a number of flows. Here ideals and formal gestures of pre-war European modernism find a home in Southern California -- including the Arcadian notion of the primitive hut -- occupying utopian interiors that are, to all intents and purposes, contiguous with the outdoors, a tamed and regained paradise.

In the VDL House, two visions of modern domesticity co-inhabit: the original 30s version of the house, and the 60s post-fire iteration. While the two share an interest in layered and nested spaces, in planarity, and in blurring distinctions between inside and outside, the first version's strict modularity and abstract formal rigor lives in tension with the robust material textures and colors of the second.

Mark Cottle is interested in this tension -- between abstract and material, between spatial and tectonic -- an internal conflict one can find in the writings of Semper, who notably proposed that the first enclosures were wickerwork, weaving, and tapestries -- making a cultural argument for the persistence of forms related to past materials and craft procedures, even when technologies have shifted. At the same time, Semper remarked that the thickness of a wall doesn't matter, only its surface, because the surface is what defines space.

And it's here Mark Cottle finds the opportunity interact with this doubled vision by installing three tapestries, each approximately nine feet square, fashioned from plastic bags and twine, suspended at key moments in the house.

The first, in the courtyard/garden, adds another lamination, floating just in front of the stone veneer cladding. The second, at the stair/bridge, hangs in the gap. The third, in the salon, is a free plane, dividing dining and seating areas. All three are attached to existing drapery tracks and participate in the spatial logic already established in the house.

The geometry of the tapestries derive from an abiding interest in Islamic tile patterns, in particular those enriching the walls of the Alhambra, while the textures and colors reference the immediate landscape: paving stones and ground cover, clouds seen through branches, reflections on the water.

MARK COTTLE studied English literature and music composition at Clemson University, architecture and painting at Rice University, and theory and criticism at Harvard University. He has received a number of design awards, including the Steedman Fellowship in Architecture and the Dinkeloo Fellowship to the American Academy in Rome. His artwork is exhibited regularly and may be found in the permanent collections of Rice University and the Atlanta High Museum of Art, among others. He is currently an associate professor with tenure on the faculty of the School of Architecture in the Georgia Tech College of Design, where he serves as director of the college's Stubbins Gallery and also directs the school's Architecture Undergraduate International Studio.
Tweet
Share