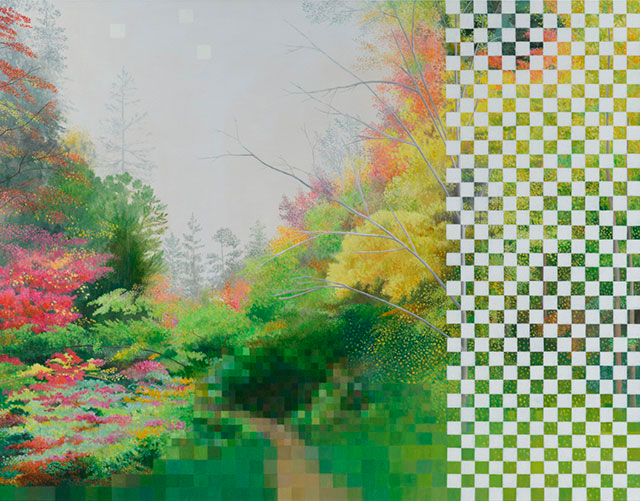 Craig Krull Gallery
Bergamot Station, 2525 Michigan Avenue, Building B3, Santa Monica, CA 90404
Dec 07, 5 PM - 7 PM — ends Jan 18, 2020
Astrid Preston's new paintings continue her decades-long exploration of the fundamental issues of perception, particularly with regard to landscape. As beauty and landscape are both mental constructs that do not actually exist in Nature, Preston’s work is about that middle ground, the metaphysical landscape where components of a scene are distilled into abstractions, signifiers, and symbols. In her previous exhibition, Preston explored breaking down her landscapes using both textured and flat marks resembling pixels, highlighting and questioning the components that define our perception of space and light. While recently preparing her archives, Preston reviewed her 45-year-old pencil drawings that constructed landscapes with thin horizontal lines. In her new paintings, she applies similar lines, and white grids, to suggest bands of light that obscure and emphasize the beauty of a scene. The artist refers to these elements as "disruptions", which simultaneously reinforce the abstract flatness of the picture plane, and suggest a screen through which we are viewing the image: an illusory distance.

In his newly published tome, Ezra Stoller: A Photographic History of Modern American Architecture, Pierluigi Serraino writes, “Towering above the growing crowd of image makers is Ezra Stoller (1915-2004), an architectural photographer of immeasurable consequence in crafting the enduring mythology of Modern architecture in postwar United States.” Throughout his career, Stoller worked directly with icons of the 20th century: Frank Lloyd Wright, Marcel Breuer, I.M. Pei, Eero Saarinen, Richard Meier, and Mies van der Rohe. Born in Chicago and raised in New York, Stoller earned a degree in industrial design from NYU in 1938. He got his start, as Pierluigi Serraino states, “at this pivotal juncture when people’s perceptions of architecture and its photographic representation became intertwined.” Stoller was, essentially, part of a small group of photographers such as Hedrich and Blessing in Chicago and Julius Shulman in Los Angeles, who “propelled the imagery of Modern architecture to become an outstanding graphic presence, with no historical precedents in terms of its visual distinction and proliferation.” Stoller was known for his keen observation of his subjects; before making photographs, he would visit the site many times to study the light and determine optimal perspectives. His photographs have been collected by the Canadian Centre for Architecture, the Whitney Museum of American Art, the Houston Museum of Fine Arts, the San Francisco Museum of Modern Art, and MOMA, among others. Craig Krull Gallery, which has represented the architectural photography of Julius Shulman and Marvin Rand for many years, is pleased to be presenting this exhibition of Stoller’s photographs, his first solo show on the West Coast.
Tweet
Share