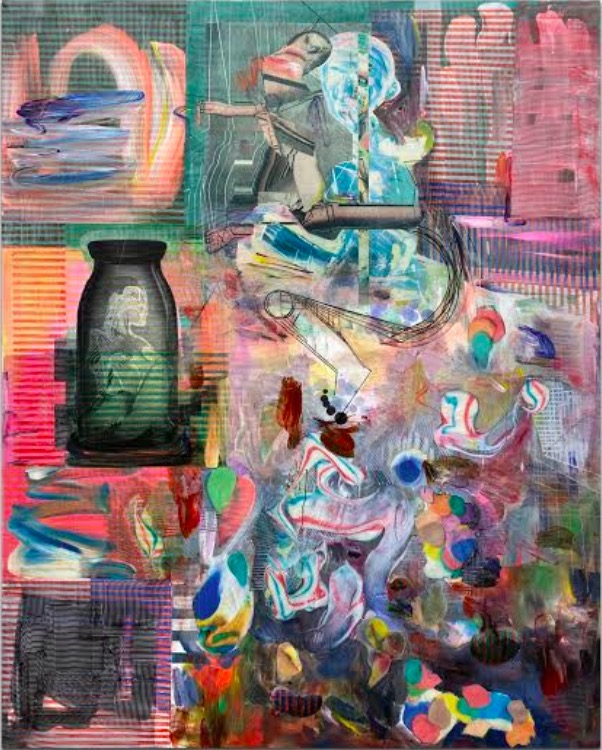 Karma International
4619 W Washington Blvd. Los Angeles, CA 90016
Dec 13, 6 PM - 8 PM — ends Feb 28, 2020
Karma International is pleased to present CELTIC FUNK ETCETERA, Markus Oehlen’s first exhibition with the gallery in Los Angeles. In this new body of work, the German painter’s signature style of collaged images and acrylic paint has created a frenetic postmodernist pastiche embodying the contemporary paradox of identity’s reduction to a collection of cultural references plucked from the world without context. Raked lines of semi-translucent acrylic top the flat works like gleaming grooves on a record, their stark rigidity boxing in the motifs only broken by expressive dashes of the artist’s brush purposefully marring the surface. Within the playful juxtapositions of the quotidian and the abstract, this is where life meets manufacture—curve meets line, tooth meets paste, pain meets pill.


Emerging as an ingenious response to being bedbound and unable to resume his decades-long studio practice, Oehlen’s use of digital imagery comes from the need to express and create rather than purely the need to innovate. Each photo-paper clip comes exclusively from a digital library of photos taken by the artist, often manipulated through a series of iPhone editing apps, printers, and scanners. In Self-portrait (Pizza backend?), the artist’s face is transmutated into an oil-slick swirl with a heatmap filter as a disembodied arm reaches down into a sun-like circle, stitching together the fragmented body in an atemporal nonspace of color with a bit of tongue-in-cheek. Dead flies and oxycontin that the artist took for a back injury recur as memento moris for the modern age. Beyond the physical texture of the works like the lines of a musical staff raised, Oehlen uncannily captures through the flat images the viscosity of toothpaste and softness of pressed playdough, recalling to the viewer specific sensorial experiences.


As a foundational member of the contrarian art movement known as the Neue Wilde—a group of neoexpressionist painters in Düsseldorf reacting against Minimalism in the 80’s alongside his brother Albert Oehlen, Martin Kippenberger, Georg Herold, Günther Förg, and Werner Büttner—Oehlen has carried that reflexive spirit with him. Throughout his evolution as an artist, Oehlen meditates on the very nature of painting and music—the latter of which he has also been involved with since the 80s—as he recalls the concept of genres like the academic landscape or the titular Celtic Funk. This involvement in music also adds a rhythmic quality, while the copy-and-splice technique aligns with the modern trend of music sampling. Though the compositions are not always ones waded into easily, viewers are rewarded with a world of aesthetic merriment that never once lets you catch your breath.

Markus Oehlen (b. 1956, Krefeld, Germany) has works in the permanent collection of the Museum of Modern Art in New York, the Saint Louis Art Museum, Sammlung zeitgenössischer Kunst der Bundesrepublik Deutschland, Kunsthalle Weishaupt, and others. Selected exhibitions include exhibitions at the Museum of Modern Art, New York; a two-person exhibition with Albert Oehlen at Museum Abteiburg, Mönchengladbach, Germany; Hamburger Bahnhof Museum für Gegenwart, Berlin, Germany; Museum Ludwig, Cologne, Germany; and at the ZKM Center for Art and Media Karlsruhe, Karlsruhe, Germany. He attended the Academy of Fine Arts in Düsseldorf, Germany. Since 2002 he has been a professor at the Academy of Fine Arts in Munich, Germany where he lives and works.
Tweet
Share