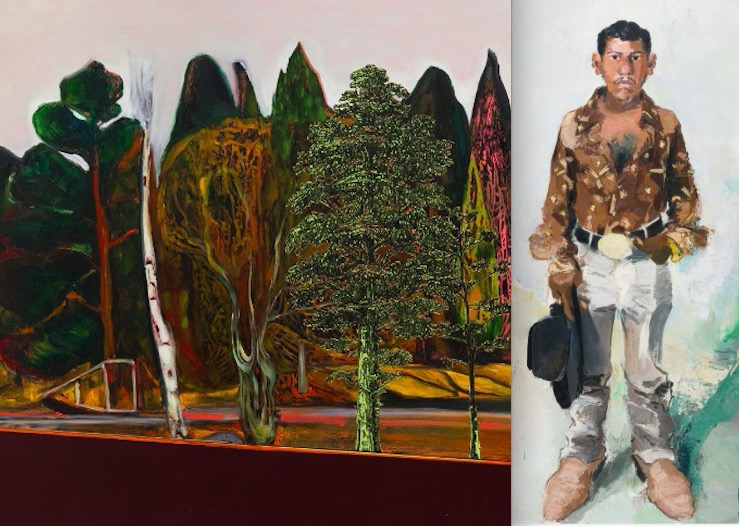 Vielmetter Los Angeles (Downtown)
1700 S Santa Fe Ave #101 Los Angeles, CA 90021
Jan 11, 4 PM - 6 PM — ends Feb 22, 2020
Vielmetter Los Angeles is thrilled to announce Reflections on the Anthropocene, a solo exhibition by Los Angeles-based artist Whitney Bedford. Reflecting upon how humans have chosen to record images of the natural world, Bedford's new landscapes draw upon an archive of historical landscape paintings to illustrate how images from the past underscore the dire reality of climate change and shifting ecosystems in the present.

In this series of paintings, all titled Veduta after the tradition of "view paintings" made for travelers on their world tour in the years before photography, Bedford literally renders, reinterprets, and collaborates with landscapes made by Avery, Constable, Sargent, and others; bringing a sense of urgency to the idea of painting as souvenir. The historical paintings she has chosen to reinterpret capture sublime or bucolic visions of Europe and North America, without evidence of industrialization. Originally painted to serve as reminders of places visited, spiritual inspiration, or postcards from yet to be conquered frontiers, the paintings that Bedford reinterprets in these Vedute serve as collectively legible reminders of a time before human exploitation of natural resources shaped a new geological epoch. As she translates these landscapes into her own hand, she also intervenes in their composition, arranging precisely drawn desert plants on stages and behind glass walls in the foreground of each work; sirens from an arid, anxious future.

Known for precisely rendered landscapes and shipwrecks whipped into painterly frenzy by her expressive brushwork, Bedford has an ongoing interest in how images can act as votives for significant ideas and experiences, political or emotional. These new works mark a shift from Bedford's previous landscape paintings, in which her painterly skill was most often deployed as an emotionally evocative contrast to her drawing; meticulously rendered scenes disrupted or intensified by energetic gestures. Previous landscapes often featured a low horizon, gentle palms, and more recently compositions of Southern California flora that could be interpreted as re-enactments of the figurative compositions of monumental 19th century history paintings. These allegories of potential and of the emotional experience of making a place one's home have given way to a more critical approach to landscape. Whereas in historical landscapes, and in Bedford's own previous work in the genre, open expanses of land represent opportunity and utopia, these Vedute ask the viewer to reconsider viewing the natural world as available for immediate occupancy. Or at the least, to consider the effects of this perspective on current circumstances.

Bedford’s process has also shifted in these works. In past paintings, drawing was used to create an architecture for gesture. Here, though the paintings technically begin with the drawings, a painstaking process of masking and unmasking pushes the drawn flora to the fore and places the viewer at a further remove from the pastoral scenes behind or outside of the space of drawing. The distance created between painting and drawing underscores Bedford's archival research and careful selection of images that seem to belong to a lost or disappearing world.

The sense of loss that these paintings convey is powerfully rendered in a painting titled Veduta (Sargent,) 2019. Inside what appears to be a glassed-in viewing platform, an acid-orange tree gazes out at a rich green forest populating the gently sloping banks of a small stream. Bedford's interpretation of Sargent's Wooded Landscape emphasizes the fluid brushiness of the original painting, leaving the impression that light and leaves merge into an atmosphere of breezy, buoyant energy. The velvety ground of the forest is rich with plant life, abundant, emerald, while inside the viewing platform, this lone tree, rendered in a color reminiscent of caution signs stands on a flat, subtly metallic brown ground more reminiscent of a corporate office building than the loamy soil of the iridescent wild. This contrast between idealized images of verdant landscapes and the resilient plants of the West perform the psychology of our turbulent times, rendering the anxiety of a changing climate into dramatic tableaux. Through this meeting on Bedford’s panels, the historical representation of the sublime, the bucolic, the tranquil, the land ripe for the taking, is suddenly tinged with an edge of terror, a suggestion of the consequences of man’s desire to record and then dramatically change the landscape to serve their own purposes.

Bedford received her MFA from the University of California, Los Angeles in 2003. She was the winner of the 2001 UCLA Hammer Museum Drawing Biennale and received a Fulbright Graduate Fellowship from Hochschule der Kuenste, Berlin in 1999. She has had solo exhibitions at Art:Concept, Paris, France; Carrie Secrist Gallery, Chicago, IL; D’Amelio Terras Gallery, New York; and Starkwhite, Auckland, New Zealand. She has been included in group exhibitions at the Pizzuti Collection, Columbus, OH; the Jewish Museum, New York; Massachussetts Museum of Contemporary Art, North Adams; and the Museum of Contemporary Art, Denver. Bedford’s work is included in the Jumex Collection, Mexico City, Mexico; the De La Cruz Collection, Miami, Florida, USA; The Saatchi Collection, London, England; the Francois Pinault Collection, Paris, France; the Eric Decelle Collection, Brussels, Belgium; and the Collection Ginette Moulin/Guillaume Houze, Paris, France. Bedford is a painting instructor at both Chapman University and the University of California, Riverside.
-------------------

Vielmetter Los Angeles is pleased to present the gallery’s first exhibition with Los Angeles based portrait painter John Sonsini. Comprised of full-length figures, bust portraits, and still lifes, the exhibition, Cowboy Stories & New Paintings, centers on the theme of cowboys living in Mid City Los Angeles. Emblematic of Sonsini's 50 yearlong practice, his all-male portraits oscillate between the intimacy of depicting a specific person's likeness and more generally addressing broad issues of gender mythology. In “Francisco”, we see the sitter exchanging his street clothes for the western clothing he's unpacked from a suitcase, thus witnessing the transition from the everyday to the performative.

Sonsini’s textured brushwork foregrounds the directness of his specific style of observational realism, deeply influenced by his time working with the legendary photographer Bob Mizer and the Athletic Model Guild studio. Akin to the photograph, Sonsini’s paintings capture the likeness of his subjects with raw immediacy. Sonsini’s practice emphasizes the process of painting specifically from life, purposefully rejecting the aid of painting from captured images. He creates his work in several five-hour-long sessions with his sitters­–this durational aspect of his process and the candidness of his sitters create both a physical and psychological charge in the paintings.

Staged in his studio, the figures are removed from their day to day contexts and set against tonal backdrops devoid of detail allowing the focus to lay solely on the subjects. Items such as suitcases, bags, and boxes occasionally populate the compositions suggestive of a story, though Sonsini evades specificity in terms of locating his subjects within a defined narrative, leaving interpretation open to the viewer. Sonsini’s use of a tilted perspective places a characteristically unique emphasis on the details of these painted men’s visages and features such as their hands and shoes, bringing their individual features into sharp focus. Sonsini’s visual language and nuanced mannerism combine to mark an important place in the lineage of Southern California portrait painters.