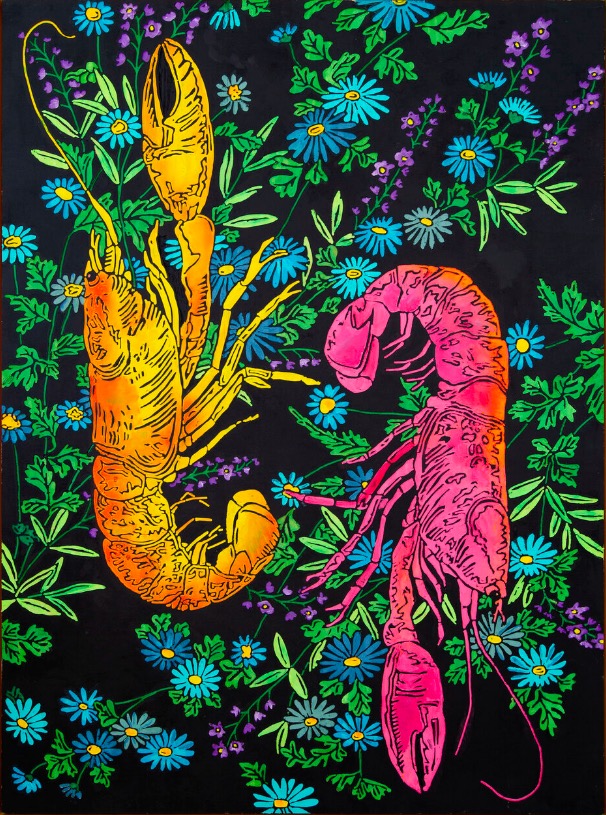 In Pictures of the Floating World, Demaree has laboriously hand-carved large scale wood works that depict animals from both land and sea in compositions of symmetrical balance, conjuring the “Yin-Yang” concept of dualism in ephemeral states of equilibrium through the gaze of Ornamentalism in the traditions of Japanese and Hawaiian history and culture. The protagonists at center stage in Demaree’s mise-en-scène are set against brightly colored decorative patterns of natural elements, such as flowers and sea kelp in a style that brings to mind an amalgamation of pop cultures 70’s-era wallpaper and black-light art, as well as the ways women have adorned themselves across various traditions throughout human history.

In this day and age of digital technologies, such as CNC routing and 3D printing, Demaree’s decision to shape and carve wood by hand imbues the material with a resonance of time spent and personal investment. Although the works reference Japanese woodcuts, they were never made to print from. Instead Demaree has placed the importance on the original source of the image rather than a reproduction of the image. The works in Pictures of the Floating World function as a physical testament and evocation of ephemeral memories and the weight of cultural heritage.
Tweet
Share