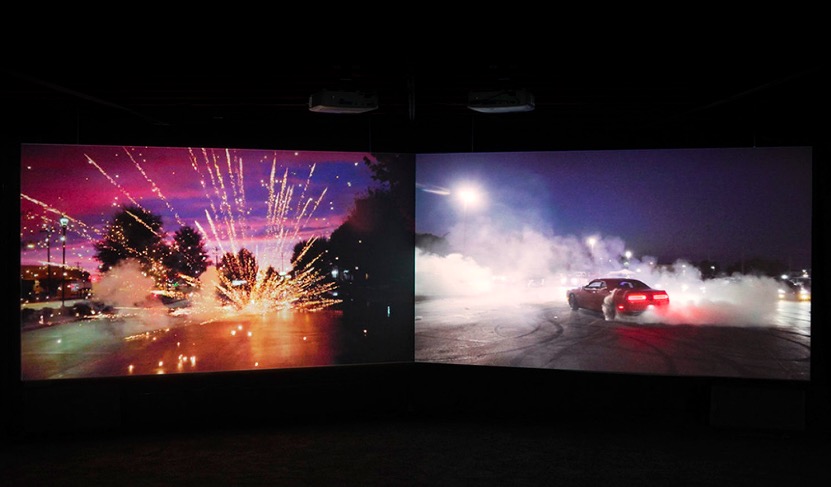 Over the course of eighteen months, Malekoff travelled extensively throughout the US, filming arranged events as well as natural patterns occurring in one of our most ubiquitous and banal open spaces – the parking lot. His video, titled Desire Lines, is a fifteen minute loop with orchestrated sound that cycles through moments of strange spectacle. Car tires spin madly in place, creating plumes of smoke that belie where they came from, appearing celestial, diffusing red brake lights into a soothing pink hue. On the second channel, fireworks pop off in a euphoric rhythm, shadows scatter, running as vibrant sparks ricochet across the black tarmac.

Moments of saturation and delirium balance via subdued atmospheres and drawn out gestures, delivering a continuous landscape that reveals audio and visual contrasts as well as cultural ones. We see a woman dressed as the Statue of Liberty juggling three batons, in semi-slow-motion, through a mostly empty parking lot. Next, we hear hoofs on pavement, following as two kids stride up to a Sioux Nation shopping center on their horses. Some vignettes capture the natural world’s reclaim, or adaptation, or even indifference to human intervention – grass grows through cracks, iguanas gather for shade under a car.

Punctuating this panorama, which flows between exaggerated and quotidian scenarios, are visions of complete absurdity. Malekoff films one particular location that provides proportionate parking for an enormous, corporate-looking glass pyramid, but the lot is mostly empty. Instead of cars, the camera finds a dancer who glides through the available spaces that surround this architectural iconography and potent symbol of human progress.

Desire Lines uses empty, bleak, paved over spaces to foreground a sort of perseverance and exquisiteness of life. These flat, concrete grids behave as stages for all types of activation and rituals, positing a location for expression and a future of meaning. Malekoff’s series of silkscreens, titled Night Suns, can be considered as intimate, spiritual studies of these modern ruins. Each vertical canvas is a sort of street lamp portrait. Giant bulbs dimly glow through nighttime backgrounds of pigment, high above the ground, reflecting onto the vacant lots below.