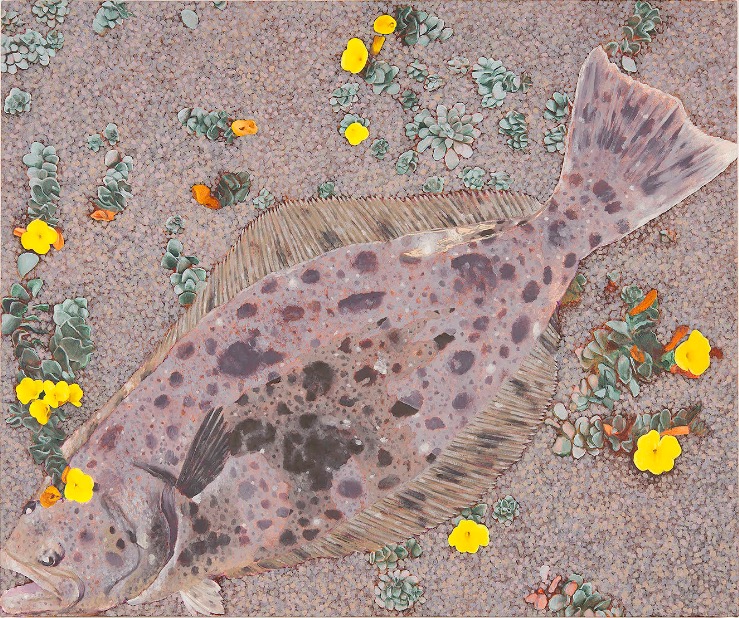 Hunter Shaw Fine Art
5513 Pico Blvd. Los Angeles Ca 90019
Jan 12, 6 PM - 9 PM — ends Feb 23, 2020
Hunter Shaw Fine Art is pleased to announce Flatfish, an exhibition of recent paintings by Adam Higgins - the artist’s first solo presentation in Los Angeles. On view are selections from a current body of work in which Higgins approaches a single subject - the California halibut - as a generative source for optical and compositional exploration. Uniform in subject and scale, each canvas articulates a variation of theme, culminating in a deep engagement with shape, color, light, perspective and technique. Energetic and studious, Flatfish exemplifies the ancient human impulse to explore abstraction through the depiction of animals.

The fish featured in this series were caught by the artist and photographed on his cell phone before their return to water. This documentation sets in motion a rigorous and layered study of compounded flatness: the flat markings on a flat fish, laying on a flat ground, flattened as a jpg, and finally painted on a flat surface. Higgins simultaneously emphasizes natural, photographic, and painterly phenomenon: lighting, framing and resolution extract visual particularities from the subject and its surroundings. These qualities are translated to the canvas as pointilist clusters or streaky motion-blurs that flicker between abstracting and describing.

A dry sense of humor compliments the series’ aquatic themes. Comedic aggression is apparent in the treatment of edge - each composition intensely self-aware of its own perimeter, cropped uncomfortably tight to create an amusing visual tension. Certain images defy their boundaries appearing to loop: the subject simultaneously exits one side of the frame while entering the other. Elsewhere, a single fish is presented in two contrasting lighting conditions within the same picture plane. A sincere charisma is amplified by Higgins' enthusiasm for his craft and its potentials: throughout the series, meticulous formal inquiries generate intimate portraits of compressed moments shared by the artist and his slippery subject.