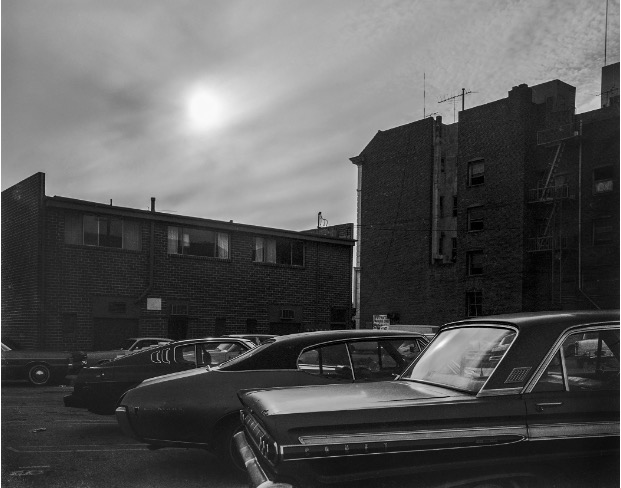 Gallery Luisotti is pleased to announce SOUTHLAND, a group exhibition. Organized by Mark Ruwedel and Theresa Luisotti, the show brings together several artists from the gallery’s program and three invited artists who in their own ways explore the vastness that is the greater Los Angeles metropolis. The show focuses on LA’s characteristically flat urban areas composed of single-family homes and small apartment buildings, and the connective tissue of streets, sidewalks and alleys. The works reveal the many textures of the city, found on the many walls and within them as well. This spaciousness creates in the words of Ruwedel, “A laboratory in which individual artists may pursue their particular interests that, regardless of intention, ultimately contribute to a collective portrait of LA.”

It’s fitting that many of the artists show domestic spaces since much of Angelino life is private and inward facing, which is at odds with its naturalistic setting between the Pacific Ocean and the mountain ranges that surround it. Black and white photographs by both Ruwedel and Welling highlight the modest apartment buildings that most people call home and they point to the irony of their names—Residence Club and variations on the ancient resort of Capri—and dressed-up facades.

Holzhauer and Divola depict the single-family home, the common unit of the American dream, seemingly in abundance in Southern California. Divola’s images are from film sets used in the series X-Files, which show harshly lighted and dated (yet pristine) interiors, ready for something unexplainable to happen. Holzhauer on the other hand, reveals the effects of time, as weathered exteriors reveal the natural state of decay of all things not meticulously maintained even in an area known for its temperate weather.

The interiors of Steve Kahn’s work and Fernandez show places of temporary transit. Hotel rooms and laundromats offer domestic comforts by the hour and are a piecemeal solution to recurring human needs. The textures present in the curtains and etched glass in those two artists’ work evoke Chelsea Mosher’s investigations of one of the largest spaces of transit in the country, the ports of Los Angeles and Long Beach. By highlighting the various industries that have passed through over the years, especially in bundles of fish nets, Mosher acknowledges the reality that we are caught up in this mostly bizarre, but at times beautiful place together. That dense claustrophobia will sooner or later be this place’s present.