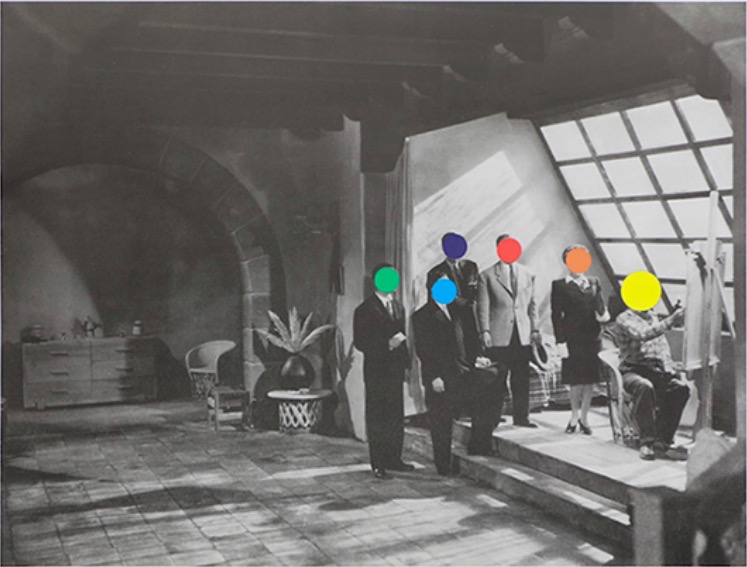 What I Saw: John Baldessari Prints, 1976–2015 comprises thirty prints, that capture Baldessari’s signature use of montage to combine banal images in sometimes discordant visual juxtapositions, or with unexpected text. His self-consciously populist approach, in which he employed found photographs, film stills, or photography of everyday objects, uses allegory and disjointed narrative, in sometimes obfuscating ways, and invites the viewer to construct meaning.

The exhibition includes several important portfolios and individual works produced in collaboration with Cirrus. Raw Prints (1976) includes six works with tipped-in color photographs of everyday street scenes taken by the artist at a shopping mall in Santa Monica. Baldessari inserts fragments of the image into the larger frame of the print, prefiguring his decades-long strategy of incomplete visual narrative and interactive authorship. The Fallen Easel (1988), an ambitious and unpredictable, multi-part composition of individually-framed and mounted images takes on a noir cast as the picture physically breaks apart, suggesting a rapid, chaotic cutting of film stills. Baldessari’s humor is also on display—The First $100,000 I Ever Made (2012), and two prints from Engravings with Sounds (2015) showcase his signature wit, while the major portfolio of ten prints, Hegel’s Cellar (1986), and his Cliché (1985) series, explore his biting insight.

Internationally recognized and widely exhibited, Baldessari addressed the social and cultural impact of mass culture, and reinvented the terms of display and image-making throughout his career. He received his Bachelor of Arts in 1953 at San Diego State College. He studied art history at UC Berkeley and received his MFA in painting from San Diego State College. He did post-graduate work at Chouinard and UCLA, and taught at CalArts (1970–1988) and at UCLA (1996–2007). His catalog raisonné is published by Yale. He mentored generations of students, and was a pivotal presence in the arts in Los Angeles. Cirrus honors his legacy and celebrates a decades-long collaboration with the artist on multiple projects, in this exhibition that reconsiders his sharp wit and acute vision, and marks an important milestone in the history of the publisher and gallery.
Tweet
Share