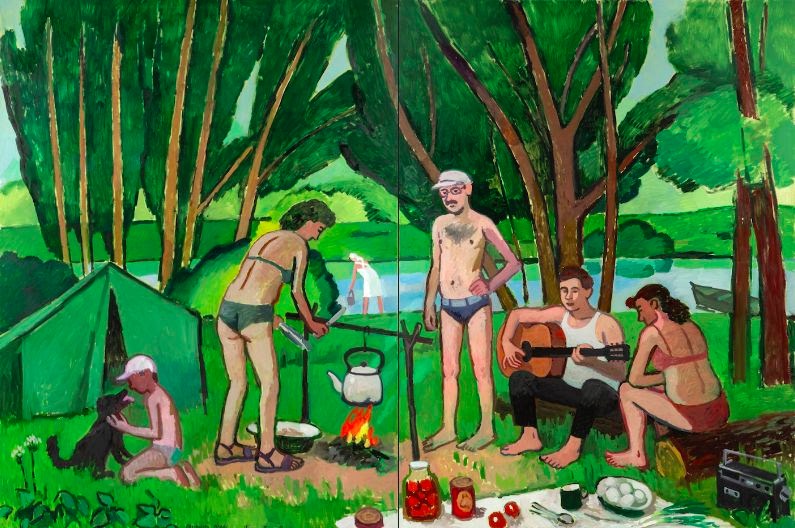 Cherkassky, just fifteen years old when the USSR collapsed, creates her paintings with precision. From rigidly structured school buildings to vibrant clothing, a multitude of artifacts fill and give life to her scenes. Representing varying Soviet realities, Cherkassky’s work narrates specific stories in addition to sharing such simple everyday situations as daily commutes and chores. Through historical research and memory, she gathers together recognizable objects and patterns to reconstruct a bygone era that defines millions of identities.

A unique blend of Soviet Realism and Modernism, Cherkassky’s paintings evoke a childish gaze while recollecting the troubled Soviet times with sarcasm and humor. Having begun the Soviet Childhood series while pregnant with her daughter, Cherkassky portrays her own childhood utopia and simultaneously conjures a feeling of impending catastrophe, neither glorifying nor decrying Soviet life. That balance is found, for example, in A Picnic, which depicts a blissful Kiev family getaway in nature. A playful response to Édouard Manet’s Le Déjeuner sur l'herbe (The Luncheon on the Grass) of 1862, the painting reflects leisure and indulgence, qualities not typically associated with the Soviet Union. Such objects of happiness as fresh tomatoes, a blue river, and a dog, are offset by the presence of a transistor radio that through its ability to carry both music and unfortunate news of political upheaval, acts as a symbol of both pleasure and doom alike.

Cherkassky’s depictions of women expand her dual narrative, bringing to light a sense of hope in spite of imminent political downfall. In Divorcees, two women relax in their slippers with tea and biscuits, one contentedly strumming a guitar while the other listens intently. The pairing of their cool-toned skin with the warm-hued objects reflects the pain of their past while suggesting optimism in their newfound independence. The importance of both self-autonomy and togetherness also inflects The Three Graces, which depicts three nude women gathered in a kitchen. Whether they are dancing, talking, or merely waiting for the nearby teapot to sound, their activity is undisclosed and unimportant. Their bodies, relaxed and facing one another, are the focus. As in many of Cherkassky’s paintings, the teapot here serves as a symbol of fleeting liberty, suggesting self-ownership alongside national pride and freedom.

While the Western view of the USSR is predominantly negative, Soviet children were generally happy. Cherkassky masterfully intersects memory and fact with propaganda, navigating the opposing views of Soviet Russia and making space for both nostalgia and criticism. Soviet Childhood reopens a lost window in time and invites one to look through it, allowing viewers to question their own definition of ordinary life and their relationship with national identity.
Tweet
Share