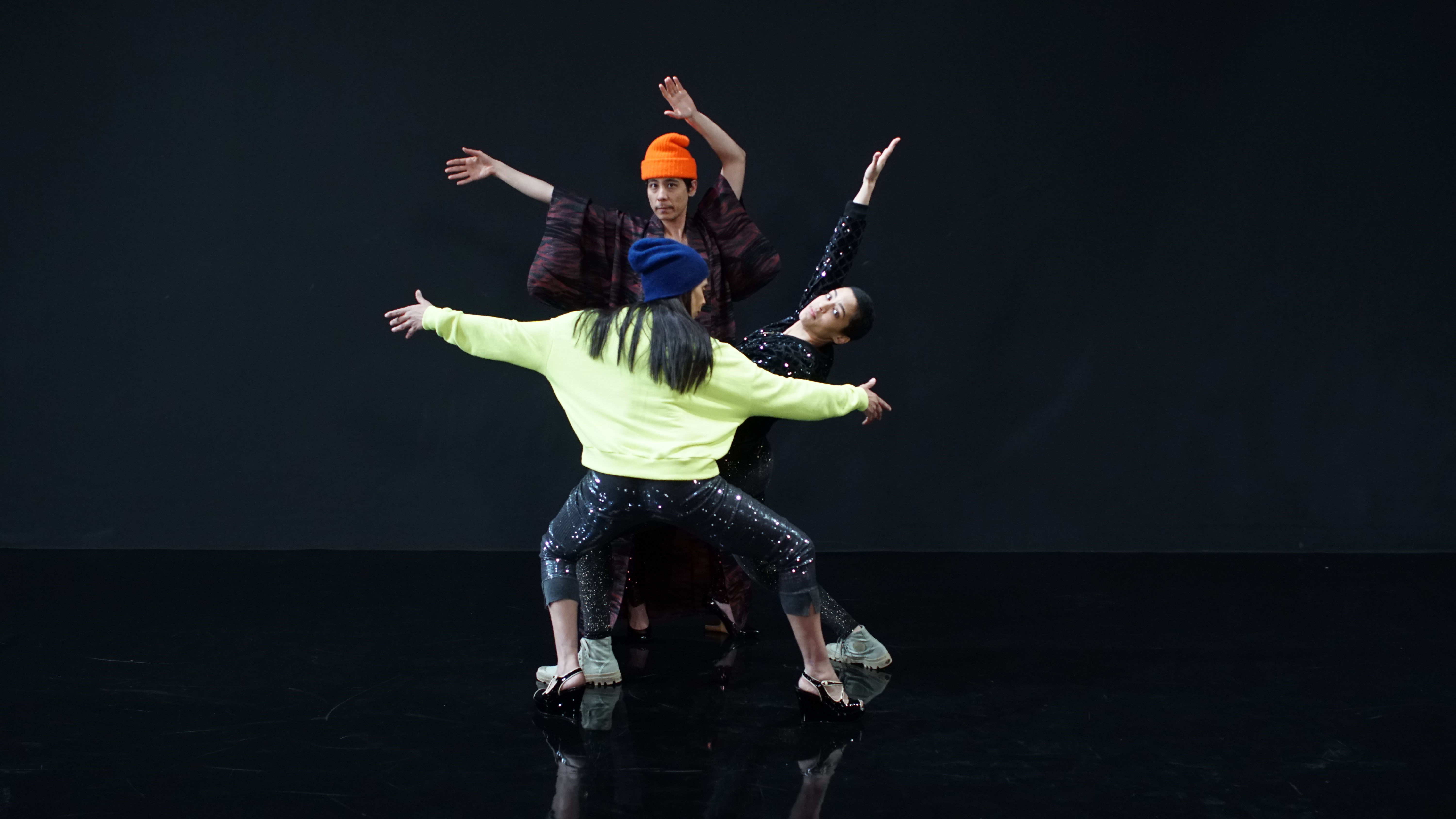 JOAN is pleased to present Berlin-based duo Pauline Boudry and Renate Lorenz’s video installation, Moving Backwards, in its U.S. premiere following their participation in the 58th La Biennale di Venezia, 2019 Swiss Pavilion. The video installation will be accompanied a by live performance by Marbles Jumbo Radio during the opening and closing weekends of the exhibition.

Starting with the feeling of being pushed backwards by recent reactionary back-lashes, Moving Backwards explores resistance practices, combining post-modern choreography and urban dance with guerrilla techniques and elements of queer underground culture. A film installation with five performers from diverse dance backgrounds complicates the notion of backwards movements and their temporal and spatial meaning. Parts of the walks, solos and group dances are carried out backwards, others are digitally reversed, creating doubt and ambiguities for the installation on the whole. The uncanny experience of temporal and spatial insecurity is complemented by a moment of reflection on the planetary politics of Moving Backwards with letters written to the audience in a newspaper by a number of artists, choreographers, activists and scholars.

Pauline Boudry and Renate Lorenz have been working together in Berlin since 2007. They produce installations that choreograph the tension between visibility and opacity. Their films capture performances in front of the camera, upsetting normative narratives and conventions of spectatorship. Figures and actions are staged, layered and re-imagined, often across time. Their performers are choreographers, artists and musicians, with whom they are having a long-term conversation about the conditions of performance, the violent history of visibility, the pathologization of bodies, but also about companionship, glamour and resistance.

Previous works include, Telepathic Improvisation with performance by Marwa Arsanios, MPA, Ginger Brooks Takahashi and Werner Hirsch, which premiered in 2017 at Participant, New York. Silent with performance by Aérea Negrot, premiered at the Biennale of Moving Image in Geneva in November 2016. In 2015 I Want with performance by Sharon Hayes, was shown in their solo show at Kunsthalle Zürich and Nottingham Contemporary. Recent solo exhibitions have included Ongoing Experiments with Strangeness at the Julia Stoschek Collection, Berlin, Telepathic Improvisation at the Centre Culturel Suisse Paris (2018) and CAMH Houston (2017), Portrait of an Eye at Kunsthalle Zürich (2015) and Loving, Repeating at Kunsthalle Wien (2015).

MJR (Marbles Jumbo Radio) is a dancer and visual artist currently based in New York City, working in performance, video, and sculpture—mainly ceramics—in ways that engage a politics of place and survival with the agencies of the body in motion. In addition to holding a longtime practice of contributing choreographic and performance based collaboration to queer feminist visual artworks, Marbles’s own choreographies include Dark, Wintering, Systems of Us, Captain, and Doing Ice Bergs (together with Simone Forti) and were presented in New York at spaces HERE, Danspace Project, and Joyce SOHO. And in Los Angeles at REDCAT, Dance Camera West, Anatomy Riot, Pieter, and LACE. For more info and contact go to: marblesjumboradio.cargo.site/

Generous support provided by the Mike Kelley Foundation for the Arts and ProHelvetia. Thank you to Charlotte Laubard.