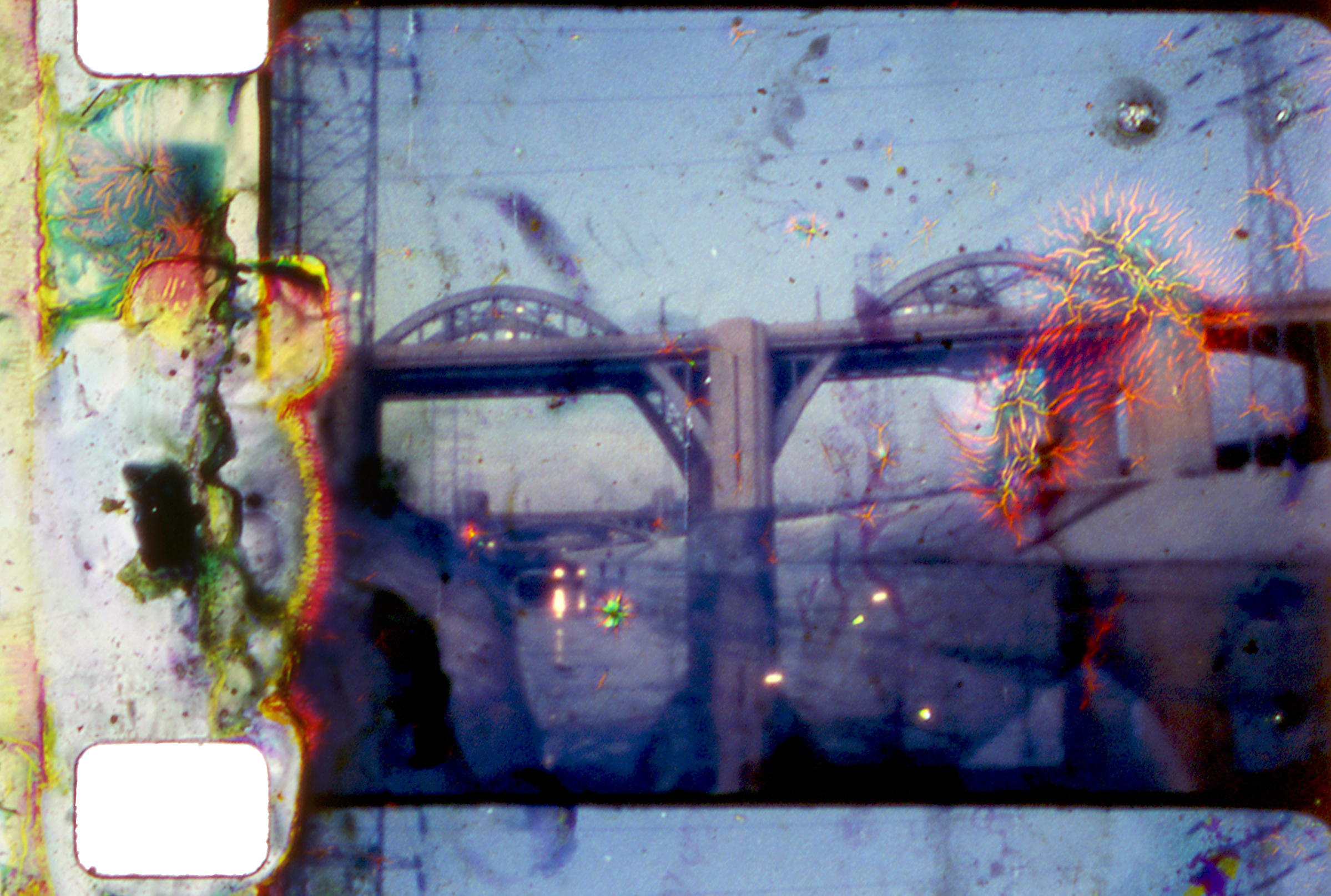 JOAN
1206 S. Maple Ave, Suite 715 Los Angeles, California 90015
Feb 28, 7 PM - 9 PM — ends Mar 28, 2020
JOAN Los Angeles is pleased to present Future Forgetting, a solo exhibition of new film and sculptural works by Jennifer West. In this homecoming exhibition–the artist’s first solo show for more than 8 years in her native L.A.–West turns her lens on the city itself, bringing her ongoing exploration of the materiality of film to bear on matters of memory, place, and preservation. The exhibition is comprised of two major “analogital” works (West’s term for her hybrid video-films), and an ancillary Zine of the type West has created for all her solo exhibitions, documenting the thoughts and process surrounding the work. Future Forgetting’s zine is not confined to the printed page but takes form as a sculptural display of text, images and objects.

Each piece of Future Forgetting draws inspiration and figurative or literal material from the Los Angeles River–the often dry, concrete-encased waterway that curls through the notoriously heterogeneous quarters of the city in a circuitous comma, connecting the disparate parts of L.A. like independent clauses of a sentence. The show’s title is inspired by the epilogue of novelist and urban historian Norman Klein’s influential text “The History of Forgetting” (1997), in which he describes the “erasure of memory” that repeats itself in the constructed mythology and physical infrastructure of Los Angeles, as well as the deceptive veneer of downtown L.A.’s urban renewal. Future Forgetting uses the physical texture of film to describe Los Angeles as both a place and an image at once–an unstable construction that erodes and replenishes with time’s ebb and flow.

The large video projection, 6th Street Bridge Film (2020) is a transfer of intentionally damaged, discolored, tinted, dyed, and etched 16mm film. The footage documents the last days of the 6th Street Viaduct–the iconic L.A. river-spanning bridge that included an access tunnel which allowed motorists and film crews (permitted or otherwise) to drive from the street onto the river’s concrete embankments. Its downtown location is famous for its long list of cameos in Hollywood films such as “Point Blank” (1967), “Grease” (1978), “Repo Man” (1984) and “Terminator 2” (1991). The viaduct was demolished in 2016 for concerns over its structural integrity despite obtaining an L.A. Historic-Cultural Monument designation. The city is replacing the bridge with a new design set to open in 2022. In West’s film, a cross-section of Angelenos assembles to commemorate the bridge’s passing. Film and car enthusiasts, graffiti writers, photographers, and urban explorers drive, walk, and linger upon the bridge’s expanse and the river below for the last time. In 2019, West re-entered the riverbed below the viaduct’s former location with the film she’d shot three years prior. Unspooling the developed rolls, she submerged her reels into the river’s water, dragging them through the algae, sediment and detritus picked up on the river’s journey through the city. The treatment destroyed her original film prints but she preserved them, along with the river’s imprint on their surface, on 16mm negative stock. The surface discoloration and decomposition seen in the film’s 4K video transfer are the results of this process–using the river as a treatment for its own image.

The second major work originates further upriver at the Arroyo Seco Confluence in South Pasadena. For years during walks near her home, West had observed a preponderance of shattered TVs in Arroyo Seco’s seasonally dry riverbed. Apparently thrown from surrounding bridges to the cement below, the perplexing gesture seemed born partly of careless disregard and partly of destructive malice, but she imagined how it could be a kind of silent protest against consumer society, planned obsolescence or the tyranny of images. The cinematic, apocalyptic image of L.A.’s barren river littered with cast-off electronics inspired her to preserve the evidence of these futile acts of violence against disposable technology. She began collecting the splintered fragments of circuit board or mirrored and translucent screen intermingled with other flotsam and jetsam that had washed downriver–old CDs and stereo pieces; electric organ keys and torn audio speakers; broken golf clubs from the Arroyo Seco Golf Course, and stray arrows from Pasadena Roving Archers. West arranged the random sampling of scavenged debris by type and filmed it in 16mm on green screen backgrounds. The filming’s irreverent style echoes the miscellany of the dredged collection. The artist’s cat is glimpsed walking in and out of frame, occasionally settling in the center, indifferent to the film production in process. During the film’s telecine transfer, a loose electrical cable caused the background screen to flash from green to magenta. West includes this glitching footage in a further embrace of indeterminacy and accident. The resulting work, Archaeology of Smashed Flatscreen Televisions Thrown off Bridges (2020), is an installation of flatscreen monitors facing upward from the floor, each showing a different section of her collected things. West displays her collection on top of each monitor’s screen, doubling the fragmented objects with their immaterial likeness in 16mm below. The taxonomic display is like an archeological case study of L.A.’s physical evidence–artifacts of our moment seen from some future time when our ecologically inevitable fate has already taken place.