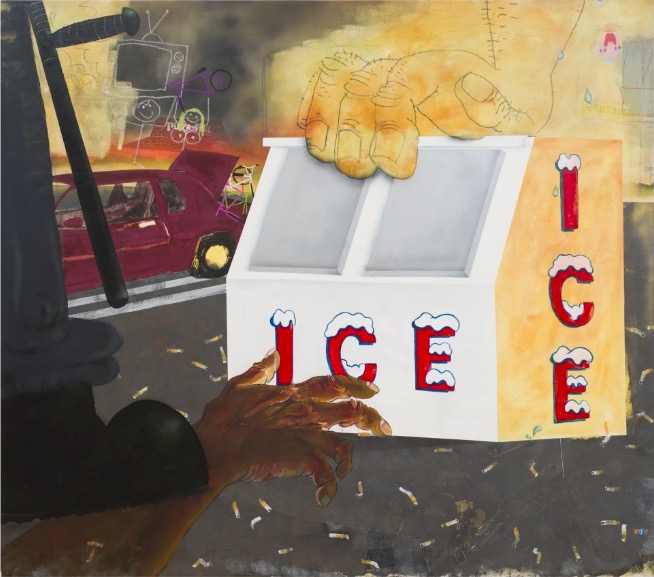 ...I spent the early part of my childhood split between California and Louisiana. I was probably playing with my Hot Wheels when the city of Los Angeles, located an hour away, was burning in 1992.


Summer Madness is a series of works evoking the connection between sweltering heat and aggression, hostility and proximity to the “other.” While media has always depicted the imagery of events such as Hurricane Katrina, the Rodney King verdict, or a mere Jordan shoe release, we often forget the nuances of these dynamics in relation to the proverbial powder kegs of our political and social climate. Because of this, our accounts can become somewhat fantastical.

Whether cloaked in complicity, fear, ignorance or desperation, it is the subtle interactions between not only different social groups, but also within our own communities, that often lead to these precarious results.

Pat Phillips was born in Lakenheath, England in 1987. Relocating to Louisiana as a young child, he spent his early teenage years painting and photographing boxcars in a small town. His work was featured in the 2019 Whitney Biennial at the Whitney Museum of American Art in New York. Solo exhibitions include ROOTS (Antenna Gallery, New Orleans, LA), Told You Not to Bring That Ball (Masur Museum of Art, Monroe, LA) and SubSuperior (Catinca Tabacaru Gallery (New York, NY). Phillips has participated in residencies at the Vermont Studio Center and Skowhegan School of Painting & Sculpture. In 2017, he received a Joan Mitchell Painters & Sculptors Grant. His work can be found in the collections of the Whitney Museum of American Art, New York, NY; Block Museum of Art, Evanston, IL; and New Orleans Museum of Art, New Orleans, LA, among others.
Tweet
Share