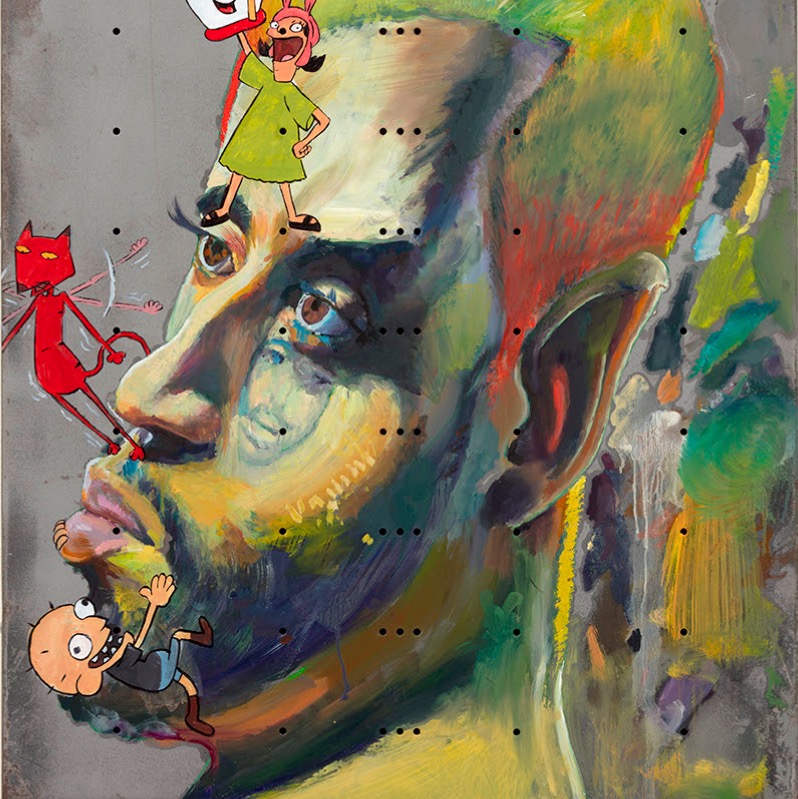 Steve Turner is pleased to present Cartoons Too, a solo exhibition by Yung Jake featuring a series of new paintings that mark the artist’s return to the medium after nearly ten years creating rap videos, related digital works and assemblage. The new paintings consist of supports made of found metal upon which the artist has painted portraits, mostly of himself, in which cartoon elements are included within his likeness.


Yung Jake earned a BFA from CalArts (2013) and while there became well known for his rap videos that integrate the worlds of hip-hop, technology, social media and contemporary art. In the last few years, he has also gained attention for his metal combines which, in 2017, were featured in ARS17, Kiasma Contemporary Art Museum, Helsinki and 21C Museum Hotel, Nashville where there is a permanently installed Yung Jake suite. This is his sixth solo exhibition at Steve Turner.

Steve Turner is pleased to present Making Bets In A Burning House, a solo exhibition by Hannah Epstein consisting of room installations in two separate galleries, one with a selection of handmade hooked rugs and the other with algorithmically printed digital works. In the first room, the textiles are installed in a room that looks like a video game dungeon. The floor is covered with a carpet that depicts bubbling lava and the walls are finished to resemble white bricks. The wall works include a range of imagery–a ten foot tall dragon; an animal face surrounded by mandala-inspired fists; pornographic videos looping inside rugs; a woman carrying the weight of Atlas on her shoulders; and a tornado with a small hand hidden inside. The miles of looped yarn convey that Epstein labored hard to create these works, and within her labor there is an ominous danger that threatens the viewer and maker.

The second room has a green carpet which resembles a grass lawn and all the wall works are all AI generated, made from an algorithm that analyzed Epstein’s works from the past eight years and predicted what she might create next. There also is a monitor playing surveilled content, filtered through an AI image recognition software, identifying people and objects from the first room. A single handmade work sits on the grass, a colorful soft worm, whose face goes from innocent to menacing when handled.