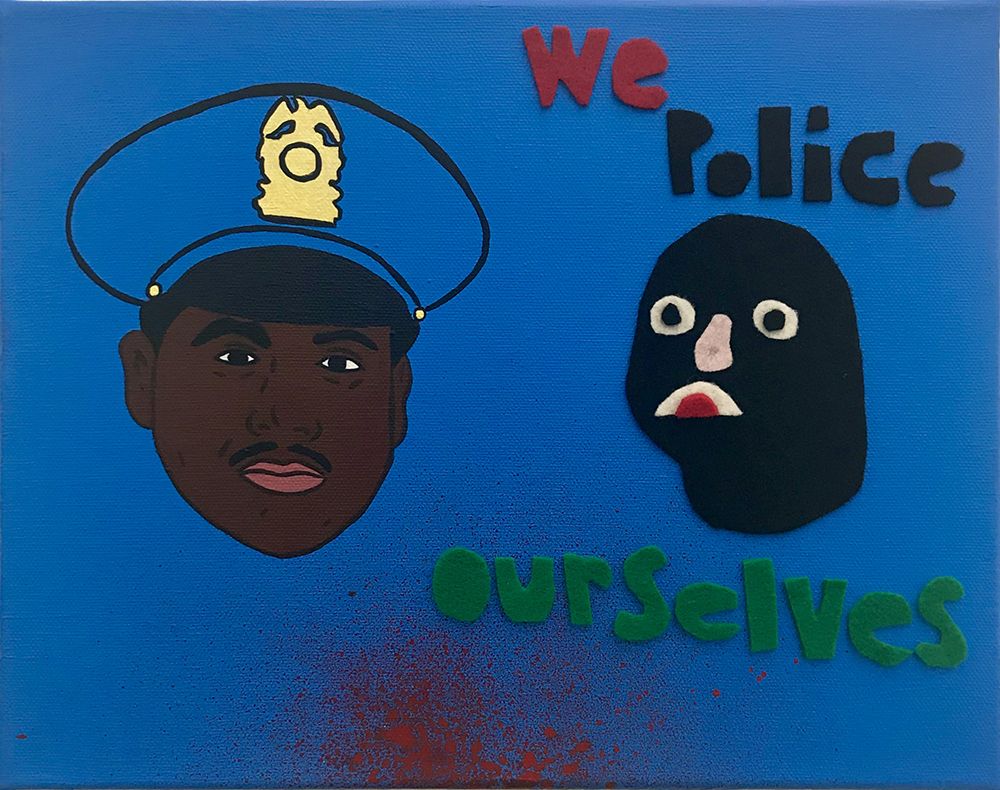 Steve Turner is pleased to present Why you really mad?, a solo exhibition by Los Angeles-based David Leggett which features paintings and works on paper from the last few years that utilize a comic style to deal with serious subjects like racial injustice and police brutality alongside lighter ones like art history and pop culture. While he makes his works accessible with colorful depictions of Bart Simpson, Fat Albert, Alfred E. Newman and other somewhat familiar blobby characters coupled with catchy phrases, he does so to get you in. Once there, you will have to face the more difficult issues that are part of every work. The question in the title is Leggett’s, one he poses to anyone who might take offense at his work.
steveturner.la/exhibition/david-leggett#1

Steve Turner is pleased to present Memoir 1, a solo exhibition of new paintings and drawings by Brittany Tucker, a New York-based artist who has been working in Vienna during 2020. As with past works, Tucker continues to juxtapose realistic self-portraits with cartoonish figures meant to represent whiteness. However in Memoir 1, she has added a new colorful element and has created a group of drawings which shed even more light on her thoughts and feelings. They are more raw than the paintings. In presenting them, it is as though Tucker is sharing her private diary. Uniting all the works is the sense of shame and guilt that black women deal with in America by trying to fit into a society that often shuts them out. According to Tucker, “the cartoon figure is a shame monster that’s always there but never fully present.”
steveturner.la/exhibition/brittany-tucker-2

Steve Turner is pleased to present Schadenfreude, a solo exhibition featuring recent work by Los Angeles- based Samantha Rosenwald. Schadenfreude, a German word that does not neatly translate into English, denotes the complex feeling of pleasure in witnessing another person’s misfortune. This cruel form of satisfaction relates to the Zanni—a clownish character of 16th century Italian Commedia dell’arte. A Zanni, a foolish, ignorant servant, through self-humiliation and idiocy, is always the butt of the joke, both to his onstage superiors and to the audience. The English word “zany” comes from this character.

Peepee, the comically rendered insect that is central to all of the works in the exhibition, embodies the meaning of schadenfreude and the spirit of the Zanni. The comedy and cuteness of her circumstances please her onlooker while her deeper pain, anxiety, and humiliation lurk just below the surface. In this way, Peepee is herself a Zanni—she provides comic relief as a foolish inferior who undergoes humiliation for the sake of the observer’s pleasure.

These non-stinging passive bugs, blown up in scale, cartoonized and given human traits, are Rosenwald’s self- portraits and serve as allegories of the pressure on women to perform, serve, and entertain. They also relate to the fetishized and idealized female at large, both past and present. The perfect woman is small. She is slight and sweet, cute and passive. The name Peepee originated as a nickname given to Rosenwald by her boyfriend. She describes it as the perfect name for her goofy caterpillar alter-ego, both absurd and embarrassing, yet also cute, especially at first read.
steveturner.la/exhibition/samantha-rosenwald#1
Tweet
Share