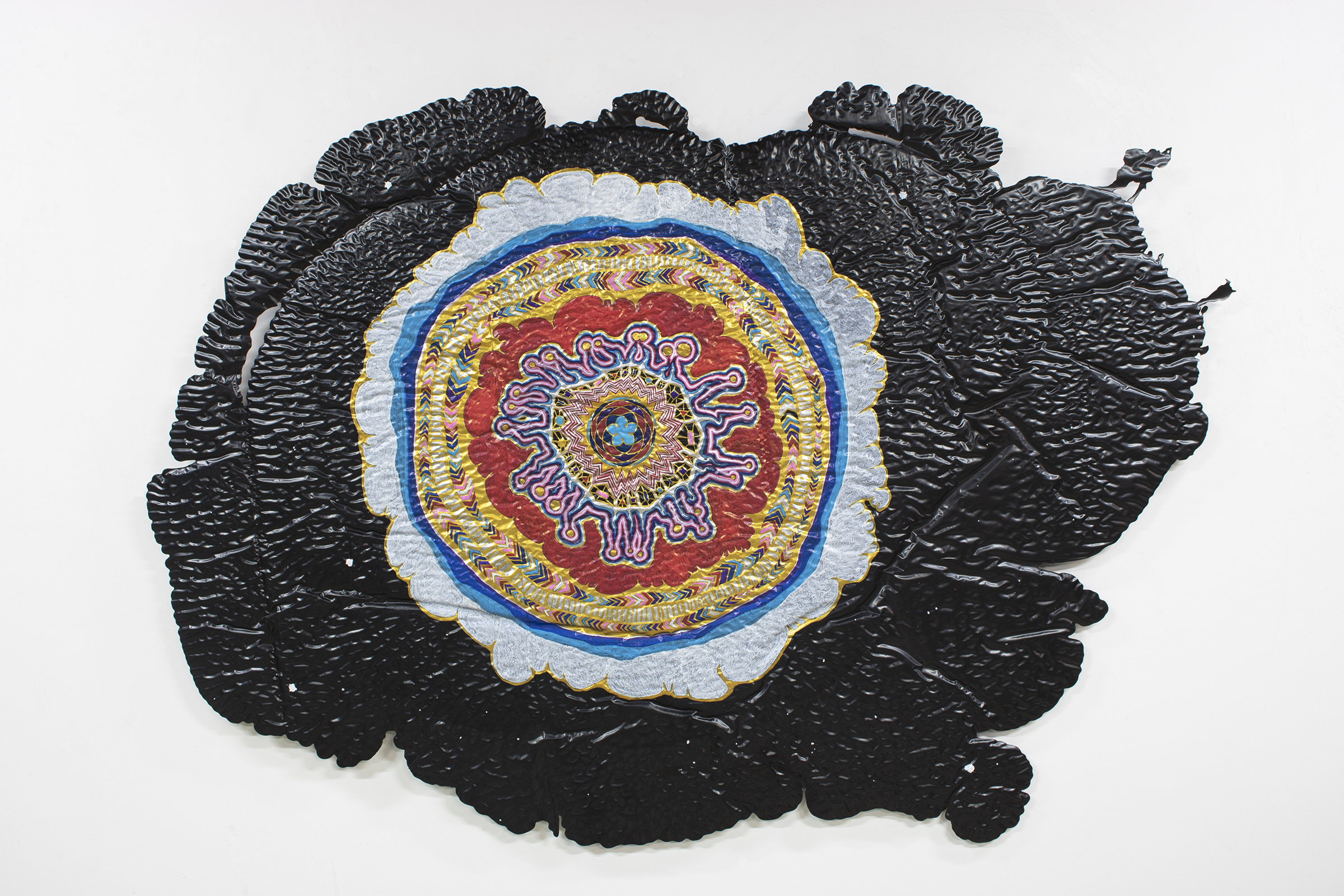 [By Appointment Only] Jamison Carter: All Season Radials


Klowden Mann is proud to present our fourth solo show with Los Angeles based-artist Jamison Carter, All Season Radials. The exhibition features a series of new wall works and free standing sculptures, incorporating poured and cast urethane resin of the kind we have seen in Carter’s past bodies of work, but here using a new technique in which the artist transfers original marker drawings onto the surface of the resin. This new drawing technique in Carter’s practice allows him to more overtly incorporate referents to subjects that have long been fascinations for him: esoteric symbolism from belief systems, celestial bodies, Giovanni di Paolo’s illuminations to Dante’s Divine Comedy, Piranesi’s Prison etchings. Along and on the gallery walls, Carter’s nebula drawings on black resin float in plastic space. At the same time, six sculptures made from resin, marker transfer, wood, and glass placed throughout the gallery space speak to the body and lineage as it expands, breaks apart, and forms anew within the larger context of time.

While past exhibitions saw Carter creating dialogue between his sculpture and his drawing, in All Season Radials the dimensions have collapsed into one another with the primacy and intimacy of the drawing often leading the narrative of the work. Evidence of the artist’s hand grounds the work and yet the drawings read like portals into another world. Most of the drawings are radial in form, frequently with bright color against the black reflective surface background of the resin, alluding to shapes that are often associated with religion such as the halo or mandala, or to 17th century European esoterics like Robert Fludd, but also to iconic 20th and 21st century images of space. The radiating compositions are driven by the attempt to capture nebula as they appear to us in Hubble telescope imagery. The drawings read as distinct objects carrying the illusion of weight within larger space, and yet appear to be floating; rather than placing the objects in Earth-bound space, Carter is placing them in celestial space.

While this technique of drawing transfer is new to Carter’s practice, the original drawings themselves appear more traditionally hand-made than the drawings he has made in the last several years. Carter’s need for the creative process and production to become more intimate led him to bring his hand more directly into the making of the work; past drawing work has often been mediated by a straight edge, and previous sculptures referenced the body in scale but required more mediation than the current body of work. Much of the impetus for this work came from the interior experience of grief, as Carter lost both of his parents in the months in which he was making work for this exhibition, which was originally planned to open at Klowden Mann in April. In celebration of them, and in memorial to them, he found himself for the first time wanting to make things that were consciously beautiful--more concerned with the value of aesthetics than he had been in his work before. Allowing himself to engage in a desire for beauty, he also found himself engaging with the abject as well; beauty bumping up against elements he found almost repellant, referencing the physical struggle of the body more directly than he had before.

And accordingly, in the freestanding sculptural works, we find presence and absence of the body over and over again. We feel the resonance of Carter’s parents and their transition to another realm, as well as traces of our former daily lives--as we grieve all of the losses of these past months of pandemic and necessary uprising. Two installation pieces reflecting stars in the night sky will span the main gallery space while another stands as the plastic shell of a body already broken apart but in a way that still implies movement up, out, elsewhere. Here, Carter is placing reverence in space as potentially the last moment past dogmatic religion; a place in which we can ascribe something higher than ourselves, not yet embedded in prejudice or pain. Or at least a space that contains power our language still cannot contain or define.

The exhibition will open by appointment on Saturday, June 20th and run through July 31s, with opportunities for in-person and digital engagement to be announced throughout the show. Thirty percent of all sales from the exhibition will be donated to the Los Angeles chapters of Black Lives Matter and Showing Up for Racial Justice.

In addition to Carter’s solo show, a presentation of collaborative sculptural work with New York-based artist Adam Brent will open in the gallery’s project room during the course of the exhibition, with conversations between the two artists available via video as well as other supplemental materials.

Jamison Carter (b. 1973, Winston-Salem, North Carolina) received his MFA from the Cranbrook Academy of Art in 2001, and currently lives and works in Los Angeles. His work has been exhibited in solo exhibitions in Los Angeles including Klowden Mann, California State University Northridge, and MorYork Gallery, as well as a 2018 solo exhibition at Brandstater Gallery in Riverside, CA. He has exhibited in group exhibitions at galleries and public institutions throughout California, at Helzer Gallery in Portland, Slag Gallery in New York, and in Italy at the Museo Archeologico in Amelia. His work was featured in the exhibition We Must Risk Delight: Twenty Artists from Los Angeles with Bardo LA as a collateral exhibition of the 56th Venice Biennale in Venice, Italy. He has exhibited at art fairs in Brussels, Chicago, San Francisco, Houston, and Miami. His work has been featured and reviewed in the Los Angeles Times, New American Paintings, LA Weekly, Artsy, KCET’s Artbound and elsewhere. Along with private collections internationally, his work is held in the permanent collection of Weatherspoon Gallery, The University of North Carolina at Greensboro. He is currently the Head Professor in Sculpture at Los Angeles Valley College.
Tweet
Share