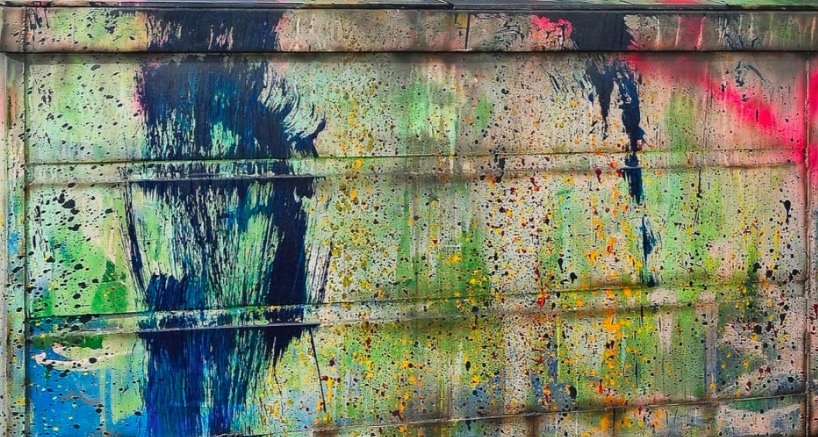 Los Angeles based artist, Kaz Oshiro, was born and raised in Okinawa, Japan. Immersed in transposed American culture since day one of his life, objects of nostalgia from the immigrant artist’s overseas youth may look equally familiar to American mainlanders. Born in 1967, Oshiro recently told the story that, as a youngster, he scrutinized “a printed poster of a painting by Photorealist artist Ralph Goings depicting Heinz Ketchup bottle and some salt and pepper shakers in a typical Okinawan hamburger joint”. The future artist could tell that something “wasn’t quite right” about this image, an cites it as an early influence on how he came to produce virtuosic 3-dimensional paintings of such banal subjects as those on view; a fast-food trash bin, stereo speakers, a truck tailgate, a sofa cushion, a dumpster, five I-beams, two broken paintings and three dusty paintings (with finger swipes).

Having observed soldiers going to and returning from the Vietnam War, while growing up with the children of American military personnel, Oshiro matured to be questioning artist. So, we may ask, “why these objects?” Well, let’s break down the idea of a “typical Okinawan hamburger joint”. How many hamburger joints would exist on a small island, across the Pacific, and for how long, before some could be considered both “typical” and “Okinawan”? Well, the US occupied Okinawa since 1945 and a hamburger, French fries and a Coca-Cola is the iconic American meal, then it stands to reason that with thousands and thousands of homesick Americans, it must’ve been Okinawans who were flipping burgers in their own joints to meeting the American demand for several decades before A&W set up franchise in 1963, and McDonalds in 1976. However, less visible than the American comfort foods and less audible than the American Top-40 are the other American questions which anyone, especially and Okinawan, could logically ask. Are these Americans and their 1200 nuclear warheads defensive or offensive, protective or endangering? Less arguable is the notion of fighting for and protecting American Democracy (Freedom of Expression!) and the Capitalist way of life (nowadays argued everywhere, in the streets and on social media, with or without masks).

In these days, when a stubborn “misunderstanding” in a parking lot can prompt a viral videoed confrontation for “the good people on both sides” to take sides on, it’s a small wonder that anyone could ever have driven her truck around with a bootlegged “Up Yours” bumpersticker, effectively “flipping the bird” indiscriminately to all. Such is the fierce and commonplace individualism in America, summed up pithily by Philip Roth in four words “the indigenous American berserk”.

Kaz Oshiro moved to Los Angeles in 1986, already familiar with America and its illusions. The Plato’s Cave allegory is of guidance to Oshiro’s expression, and he therefore feels affinity for artist such Los Angeles artists as Mike Kelley, Jim Shaw and to MoCA’s “Helter Skelter” show, also to New York’s Cady Noland, referring to them as “truth-seekers”. He holds great reverence for purity of abstract painting, even the masters, often now rebuked as “alpha-male”. Oshiro has said “I see myself as a still-life painter trying to become an abstract painter”.

PS: 96375 is the zip-code of Oshiro’s neighborhood military base in Okinawa, some 6,416 miles to the west (according to Google) of the world’s most recognizable 5 number sequence, 90210.

Our business hours are Tuesday to Saturday, noon to 8pm. We are available on other days, or earlier hours, by appointment.