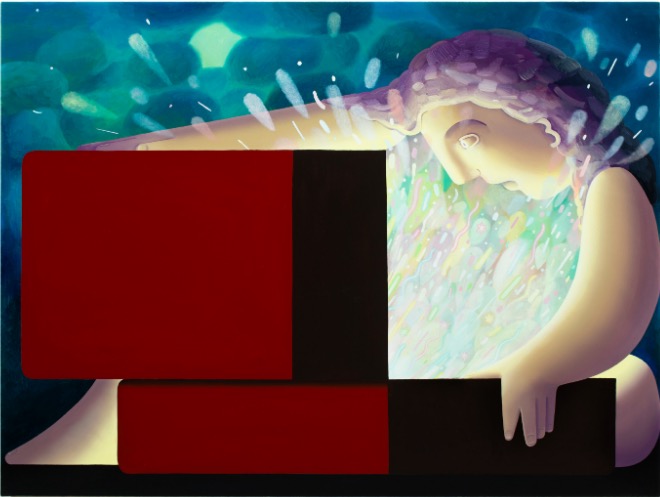 Which dreamed it?
– Lewis Carroll, Alice in Wonderland


Standing in front of a work by Eleanor Swordy we sometimes find ourselves looking down, as if from a position both ‘outside’ and ‘above’ the scene it depicts. The vertical becomes confused with the horizontal. As we go on looking, we notice the figures who inhabit these scenes are engaged in a similar activity to ourselves–staring at something, perhaps intently, perhaps adrift in a state of abstraction. Their stances seem to mirror our own in interesting ways; the attitudes they convey suggest they are on the verge of some kind of revelation.


Some figures appear less fully individuated than others; closer to abstract shapes, they are only halfway toward being self-aware. Many are set snugly against the outer limits of their painted environments: limits only we, with our three dimensions, can conceive of as such, but which constrain them nonetheless, like invisible walls. Formally, they are less the products of their environment (of, say, a single visual language) than its prisoners; they could be seen as occupying space the way Alice occupies the White Rabbit’s house, once she has drunk the potion that turns her into a giant. That they appear unaware of their paradoxical captivity might contribute that hint of pathos which many of Swordy’s characters seem to emanate.


In The Meeting of the Flat Earth Society, one particularly curvaceous figure displays a sheet of paper to his cohorts; while its surface is obscured from us, he must be presenting them with a freshly worked-out refutation of the great Pythagorean conspiracy. In a case such as his, to prove the world’s flatness would be to stumble upon the truth of his own being. To do so, he would have to stand where we are, on the outside of his world, one short, metaphysical leap away. Unable to perform such a leap, he is a bit like the worm in Outing of the Excavation Club, unearthed by a pensive beachcomber who stares down, like a benevolent god, upon this creature in its niche, itself a sort of painting-within-a-painting.


Maybe all painters are Flat Earthers of a sort (and perhaps, in other ways, excavators too). Students of modernism repeat the mantra about the essential flatness of painting, but flatness is a value the painter must discover each time if it is to have any meaning. To simply assume it as a ‘fact’, like the fact that the earth is round, would be to diminish its vitality as a truth. By refusing such complacency, painters are like nutty conspiracists: questioning narratives of progress, convinced there is always more to the story.


If we examine the various objects of these figures’ attention, we may realize each of them could be a stand-in for painting itself. These include shapes that are planar (like paper), as well as forms that, by their vertical situation relative to the picture-plane, serve to dramatize flatness, or abstraction, or both: a map, or a yoga mat, or scrunched-up waste paper (flatness transformed into sculpture, as in Air Signs); or our bird’s eye view of a wishing well turning into a bevel-edged mirror or screen (Wishing). Salomé might be looking up at John the Baptist’s severed head through a glass shelf, as if she’d just pulled it from the fridge; while Pandora’s box (in Pandora) suggests both the mysterious suitcase in Pulp Fiction and an open laptop. Here Swordy upends iconography we associate with Danae, another girl out of Greek mythology. While the latter receives Zeus in the form of a shower of gold, this girl takes a more active role, absorbing into herself (or merging with) an upward silvery flow of starry, vermicular manna.


Another pervasive formal theme is the disjunction between micro- and macro-activity in these paintings. Swordy’s backgrounds often feature grids that resemble mosaic tiles, as in Salomé; while in others a confetti-like flotsam made up of coloured pebbles, free-floating brushstrokes and flicked cigarette butts circulates through (or fills out) areas of space. Each element here is an autonomous event, punctuating the visual field without necessarily playing a structural role (the way, say, a pointillist’s dots are integral to the picture they are subsumed in). Viewers forced to gallery-hop from home, and so denied any real sense of the works’ scale, can zoom in on these renegade details, while navigating the abundant busyness of the Swordean cosmos.