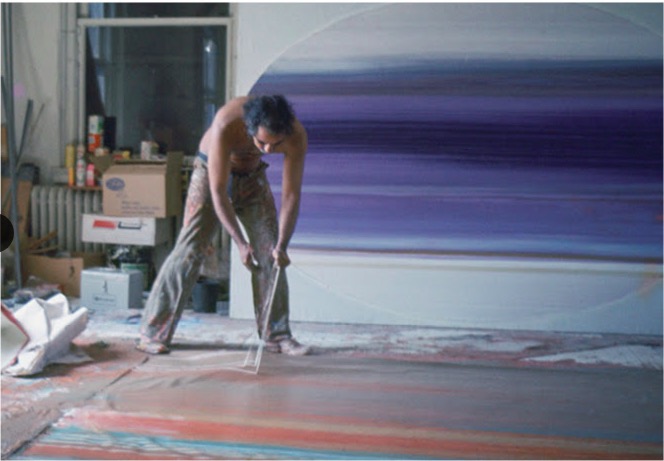 Hauser & Wirth ✨
901 East 3rd St. Los Angeles, CA 90013
Sep 10, 11 AM - 6 PM — ends Jan 10, 2021
A pioneer of the New York School, Ed Clark (1926 – 2019) extended the language of American abstraction beyond expressionism through his inventive use of pure color, abstract form, and the seductive materiality of paint. Following Hauser & Wirth’s recent New York exhibition of Clark’s paintings made from 2000 to 2013, ‘Expanding the Image’ will be the gallery’s first exhibition in Los Angeles devoted to the artist. On view will be works from his highly formative years of 1960 through 1980, two decades during which Clark made pivotal breakthroughs that expanded the language of abstraction.

This intimate presentation finds Clark solidifying a signature style that evolved from two ground-breaking techniques that he pioneered in the late 1950s: the use of a push broom to handle paint, and the invention of the shaped canvas. Both innovations would become central to Clark’s seven-decade career and support his unique synthesis of European modernism and New York Abstract Expressionism. The artist explained, ‘I began to believe that the real truth is in the stroke. For me, it is large, bold strokes that do not refer distinctly to seen nature. The paint is the subject. The motions of the strokes give the work life.’

Clark’s paintings reside in the permanent collections of important American museums, including the Whitney Museum of American Art, The Museum of Modern Art, and the Brooklyn Museum in New York, and his oeuvre was recently celebrated in the landmark touring exhibition ‘Soul of a Nation: Art in the Age of Black Power 1963 – 1983.’ The exhibition at Hauser & Wirth Los Angeles seeks to expand awareness of his canonical position in the history of Abstract Expressionism, and his critical role as a continuously and rigorously original artist in the story of American art.

About the Exhibition
It was in 1956 while living in Paris and finding respite from racial discrimination in America that Ed Clark broke new ground in abstract painting. He was the first artist to use a push broom to literally sweep pigment across the canvas laid out on the floor in what he called ‘the big sweep.’ This idiosyncratic method gave rise to a new type of stroke that allowed Clark to cover large areas with great energy and velocity, while also maintaining straight lines and achieving effects that neither a hand nor standard paintbrush could render. In a 1997 interview, Clark described the physical intensity the push broom allowed, noting, ‘it’s like cutting through something really fast; that’s what the push broom gives you, speed. Maybe it’s something psychological. It’s like cutting through everything.’

Towards the end of 1956, Clark returned to New York and became part of the city’s downtown scene. Alongside artists Al Held, Sal Romano, John Krushenick, George Sugarman, and Ronald Bladen, he co-founded Brata Gallery, a cooperative among Tenth Street galleries of the East Village, creating a space devoted to changing the way contemporary art was made and exhibited. For the next decade, Clark would use the push broom technique to produce a sense of ‘drive’ within his paintings, producing the levels of force and luminosity seen in such paintings at Hauser & Wirth Los Angeles as ‘Untitled’ (1960), ‘Locomotion’ (1963), and ‘Untitled’ (1964). It was also during this period in New York that Clark introduced his shaped canvas – the first documented in the US – at the Brata gallery in 1957.

In order to ensure a positive and safe experience, the gallery has made changes to the site in accordance with LA County mandates. These updates include, but are not limited to, designated routes, hand sanitizer stations, and digitized materials you can access on your smartphone.
Tweet
Share