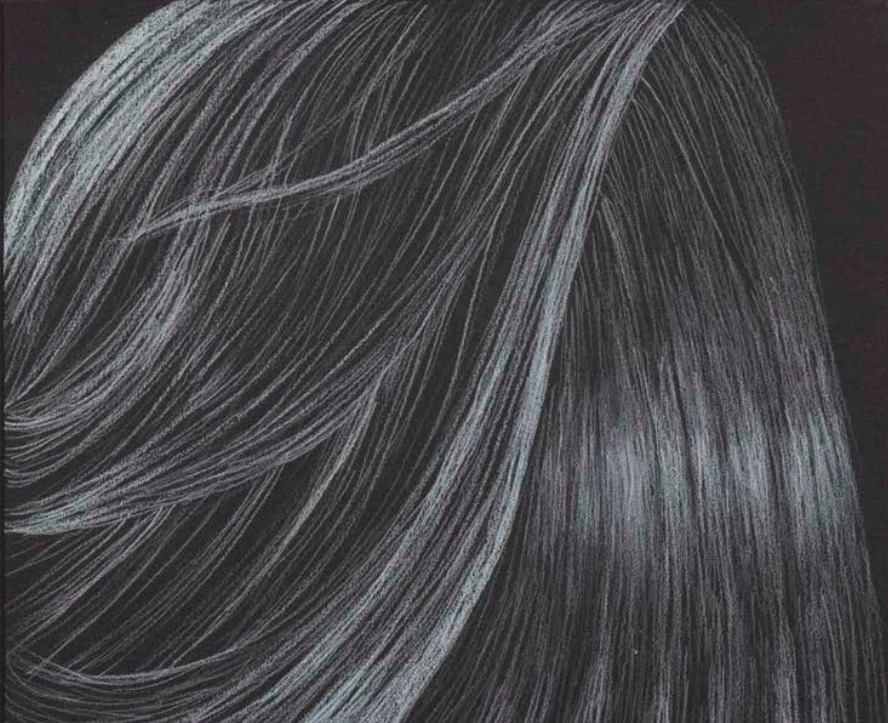 [By Appointment Only] Nancy Buchanan: Crowning Glories | Doug Wichert: The Isle of the Dead Germans

Words on the show from the artist:

Crowning Glories
As a graduate student, I was mentored by minimalist light-and-space artists, including Robert Irwin and Larry Bell and came to appreciate the total environment surrounding an artwork. I also appreciated the beauty of waste materials. When I made a rug of human hair and poodle fur, organized by length, color and texture, I was surprised by some viewers' visceral responses. This opened a new direction, and from that time on, I have made works involving hair.

Some, like Twin Corners and Hairdos, were installations. Hairdos utilized another waste material: aluminum turnings from metal recyclers—the dichotomy here was that the turnings looked soft, but of course were razor-sharp. For Twin Corners, I painted my body to mimic the space nearby. I also made a large pencil drawing of one of the large aluminum spheres. Hairdo Redux is a new version of this, charcoal on tissue. In 1972, for The New Art in Orange County exhibition, I sacrificed my own long hair in the performance Hair Transplant: I dyed it red and curled my waist-length hair, then replaced Bob Walker's moustache and body hair with my cut-off locks.

The mother of the nine muses, Mnemosyne, stores her own memory within her long hair. The substance of hair does recall one's heritage: the chain of maternal DNA can be found within individual hairs. My 1975 performance A Little Style involved arranging the hair of five women on or into semi-geometric forms, while each spoke about difficult childhood memories.

Hair is a product available from almost every human being. And, to celebrate its diversity and beauty, for the past several years I have been making illustrative portraits of hair and hair styles, sometimes incorporating actual samples. Works presented here include: Kimberly's Mask, a charcoal drawing of one of Kimberly Morris's wonderful Commedia dell'arte masks made from real and synthetic hair; Kim as a Roman Lady, a mixed media drawing from models at the Getty Villa sporting antique hairstyles, accented with my friend Kim's hair; Bianca D'Amico's locks peeking through the mesh of hand-made paper; a portrait of Marjan Vayghan while she was recovering from brain surgery, painted with a brush made from her hair—the bare rectangle on her head was caused by radiation; and my own hair appears in several pieces, including Hair-Brain.

In 2012 I began still life drawings of toys "distressed" by my dogs. I always felt a deep connection to Mike Kelley's works that incorporated discarded crocheted afghans and old stuffed animals. In a way, these distressed toys resemble hair in that their scars contain the history of those who loved/abused them. Additionally, both series challenge the "cuteness" or attractiveness of the subjects. Hair, isolated from its human bearer, is uncanny. A lock of hair for the lost loved one. A chewed-up toy substitutes an abject aura for the quality of a new item.

Words on the show from the artist:

The title springs from a relationship I had with a friend whose families tried to escape the German racist and totalitarian collapse but were destroyed in the attempt. I considered using it on work reflecting on the collapse of the idealistic humanist worldview of German philosophers and historians, but couldn't really make the name fit the project.

Then I read Weimar on the Pacific and saw, in the displaced German-speaking community in Los Angeles during the Second World War, the island of refuge of those now dead people and the subject of my title. The rescue effort of Hollywood in the West and the theater community in the East created two islands but I can only address the one in which I live.

The process is simple. On nearly daily early mornings before I leave for work I will draw and paint again and again the image of Böcklin's paintings while reflecting on the alienation, loss, fear and loathing of those small number of refugees who got this far and spent their days remembering loss and destruction while living in paradise of a sort. I have hundreds of them and just found another two boxes of the work in a closet. I can stop at any time but I do not choose to do so.

The work explores and drifts and survives the sadness that it dwells upon. I live a life so much better than the lives of those persecuted and injured but I find in the topic of alienation something that draws me closer to them even if it does not connect us.

I am neither an historian nor a philosopher. I have found an image and a project and will continue to turn my thoughts and feelings towards this study of alienation within safety and privilege, as long as it means something great and lasting to me.
-Doug Wichert, July 2020
Tweet
Share