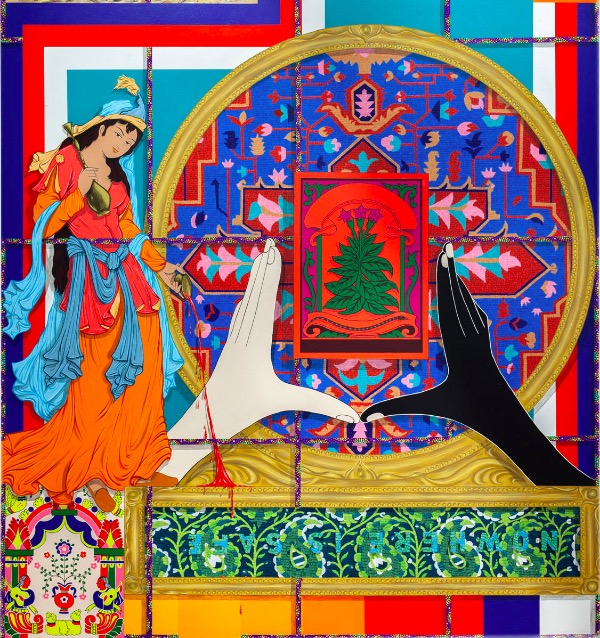 *Please note, the gallery will be open Saturday and Sunday, September 12 & 13 to mark the opening of this exhibition. Visitation is by appointment, scheduled in 30 minute increments for up to 4 people in the same party.

Shulamit Nazarian is pleased to present a series of new large-scale paintings by Amir H. Fallah. Titled, Remember My Child…, this will be the artist’s second solo exhibition with the gallery.

Over the past decade, Fallah’s work has probed the history of portraiture. Marking a significant shift in the artist’s practice, this new series defies traditional notions of this prominent genre of painting by removing the figure altogether. This absence of the subject’s likeness is now substituted with a wider representation of their personhood—one that spans time and cultures and is articulated through a network of symbols and imagery. Fallah’s paintings question not only the historical role of portraiture, but the cultural systems that are used to identify one person from another.


Decisively autobiographical, these new paintings employ a lexicon of symbols that mark key moments in the artist’s relationship with his young son, which in turn conjure significant moments in the artist’s own life. His childhood memories of Iran, his adolescence in the United States, and his formative years as an adult in Los Angeles all serve as potential coming-of-age lessons that Fallah weaves together with children’s book illustrations that belong to his son, amalgamating personal narratives with historical and contemporary parables. Each painting serves as a diary of lessons, warnings, and ideals that the artist wants to pass on to his son and together become a site map, providing coded insight into the formation of an identity while investigating the cultural values passed between generations.

Fallah’s non-hierarchical, non-illusionistic picture planes are flattened, layered, and stacked, calling attention to the psychological space of borders, identities, and histories. In Science is the Antidote, Superstition is the Disease, 2020, 17th-century maps of the world illustrate egregious errors in the perimeters—and thus, in collective understandings—of continents, landmasses, and those who inhabited them. Despite the cutting-edge technology that was used to understand geography at the time, seeing these maps today point to the idea that neither history nor science is absolute. Many of the vignettes in Fallah’s paintings ask us to consider the lessons we’ve learned. Over and over, Fallah consistently demonstrates shifting paradigms within the paintings; science and history move forward and change, refining themselves over time as they get closer to truth. Following this trajectory of questioning truths often taken for granted, Science is the Antidote, Superstition is the Disease, 2020 serves as an anchor point to the show: a twenty foot long painting that uses a range of culturally specific imagery not often found together, in an attempt to mine visual symbols of the past for key insights into the present.

Within the exhibition, Fallah addresses notions of racism and how it is often neutralized through the record of history, as grave injustices are hidden as if presented in sheep's clothing. In the painting, Remember My Child, Nowhere is Safe, 2020, a watercolor rendition depicts Christopher Columbus in the Caribbean greeting the indigenous Arawak people. What may seem as a peaceful gesture—presenting the Arawak people with a small trinket, in this case, a hawk’s bell—turns sinister, as soon after it led to their enslavement. This metaphor of deception is weaved throughout this series; much of the duplicity in the imagery is complicated as it takes on qualities of historic, scientific, and children’s book illustrations, where moments of violence are sanitized or presented as “natural.” Titles such as They Will Smile To Your Face, 2020 suggest that the ineffable subject known as “they” will do something quite different when turned away. Central to the painting’s composition, caged birds appear still and hesitant to leave. Despite an open door, they are held back only by their own volition.

In a new series of circular paintings, the artist intertwines storybook imagery, lush flora, and arabesque decorative borders throughout the perimeter of the paintings. Consistent with past works, the artist reinterprets classical floral paintings that entangle references to Dutch still lives and Persian miniatures with children book illustrations and graphic design, living together in a rotunda, or Tondo, a structure originally used in Renaissance portraiture. The flora used in the paintings don’t “naturally” occur in the same space; indigenous plants mix with ‘exotic’ ones, extinct vines grow next to contemporary hybrids, and flowers mingle together from different ecosystems. Together, they serve as a metaphor for immigrants that attempt to thrive in their new country, creating a new space that spans the limits of geography and disrupts the fallacy of borders.

Neither of this world or the next, Fallah’s works reside in the liminal space of being ‘othered’, similar to the artist’s personal experience of existing between cultures. This new chapter in the artist’s practice challenges portraiture from an entirely new point of view; one that considers the complexities of histories as they are unfolding in real time. The artist challenges history painting from a highly personal perspective by allowing multiple narratives to exist, folding geography and culture into a flattened space, and making connections where they wouldn’t normally appear. These autobiographical life maps attempt to create a new path forward: one that doesn’t abide to the linearity of histories that have been taught, but instead, contemplates the possibility of an entirely new form, leaving breadcrumbs for a new generation along the way.
Tweet
Share