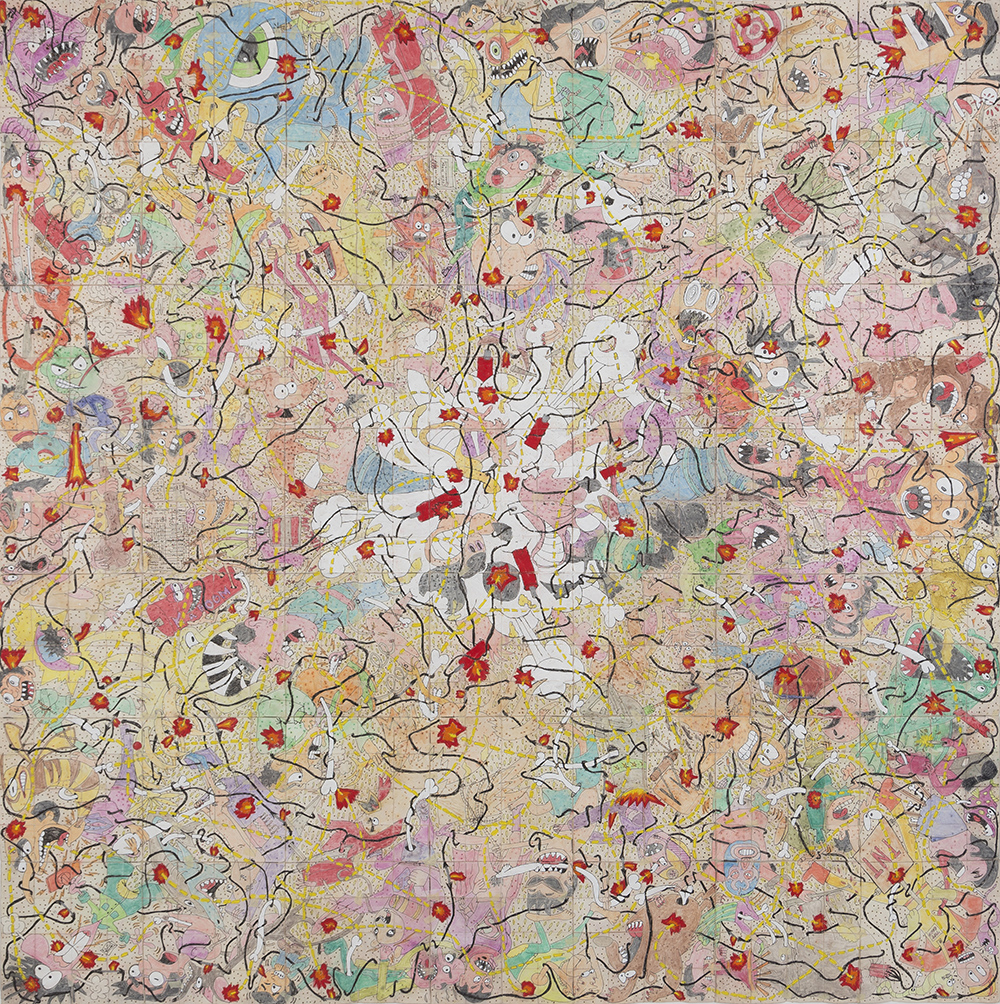 Steve Turner is pleased to present Pescando Con Dinamita, a solo online exhibition by Medellín-based Camilo Restrepo that introduces two new series of work–Pescando Con Dinamita and Juegos Finitos / Juegos Infinitos. In the former, Restrepo continues his practice of creating large scale drawings that bear numerous scars. When he completes the drawing phase, he perforates the paper with a soldering iron before causing all the colors to run by spraying water at high pressure. He then meticulously repairs all the damage. The title refers to the brutal practice of fishing with high explosives, something that is done in Colombia. Restrepo sees this as another aspect of our hyper-masculine culture, one that mostly relies on violence to solve its problems.

In the latter series, the artist first downloads a photograph from the Internet of someone who was killed in connection with drug trafficking. He then digitally erases the background and prints it in the 1 x 1 inch format of a passport photograph. Then, he aggressively draws upon the image in red ink, re-photographs it with a macro lens and finally, prints out the image in a larger size. These steps render the subjects unrecognizable, as though their faces were obliterated by violence. In so doing, Restrepo aims to draw attention to the Colombian practice of glorifying death while hastening to add that the war on drugs has caused deaths on all sides of the issue. Good people are killed by narcos and narcos are killed by the police and each other. In this series, every mutilated face is nearly the same.

Camilo Restrepo (born 1973, Medellín, Colombia), earned an MFA from CalArts (2013) and a masters degree in aesthetics from the National University of Colombia (2008). He has had solo or two-person exhibitions at Sala de Arte Suramericana, Medellín (2019); Steve Turner, Los Angeles (2013, 2014, 2015, 2017, 2019) and the Lux Art Institute, San Diego (2016). Restrepo was a recipient of the Fulbright Grant and was nominated for the Premio Luis Caballero, the most important prize in Colombia for artists over 35. A major monograph, Alias, was published in 2019. This is Restrepo's sixth solo exhibition with Steve Turner.
Tweet
Share