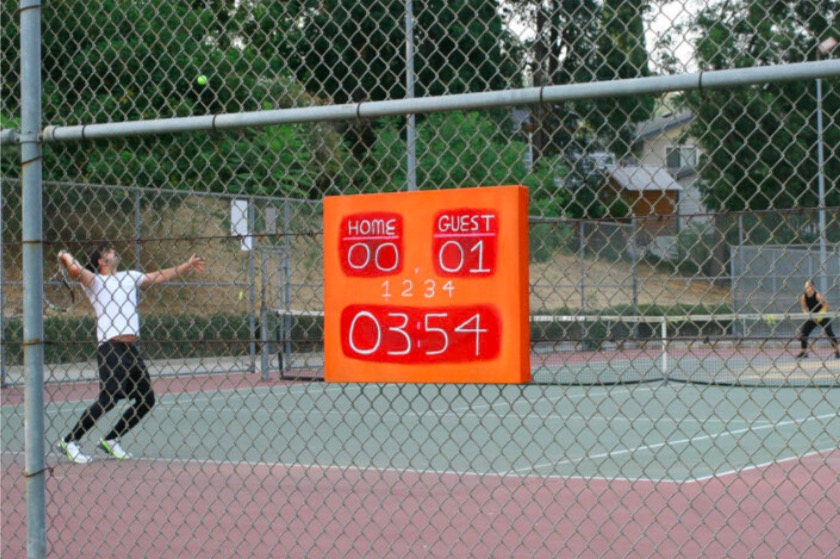 Court Space is pleased to present Doubles Alley, a solo exhibition by Ezequiel Olvera at the Hermon Park Tennis Courts. Doubles Alley takes its name from the space between singles and doubles sidelines on a tennis court. Since April these courts have been home to Court Space’s Sunday tennis games that are open to anyone, regardless of skill level, access to equipment, age, body type or color. Doubles Alley is also a reference to the two arcades, or alleys, between the tennis courts which Ezequiel’s work will temporarily live.

The installation will include a new series of oil paintings and ceramic figures. Ezequiel’s ‘score board’ paintings have developed out of a merging between his sport and curatorial practice. The seriality of these works communicates a progression of an imagined game. Each painting marks a different score, time, or period in a seemingly ubiquitous game.

Ezequiel’s ceramic sculptures are possible players within the created game suggested by the paintings, thus bridging the gap to the real tennis played at Hermon Park. Much like precolonial Mesoamerican ceramic sculptures, these figures play and dance between an imaginary, yet real space.

In attending, we want to remind all guests to adhere to the social distancing regulations set by the City of Los Angeles as they apply to public parks. Please remember to wear your mask.
This three day event is open to the public and handicap accessible.
Tweet
Share