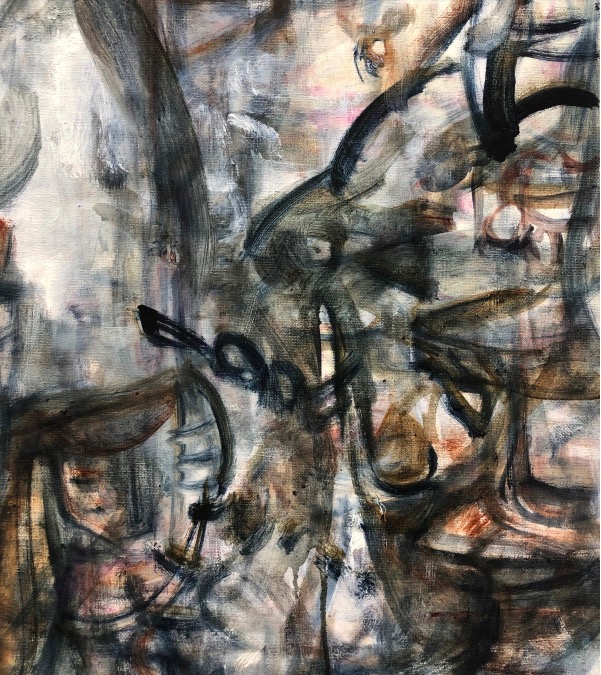 The problems of figure (or rather line); and ground and picture size and the body noted below are posed in order to explore the possibility of bridging the aesthetics of oil paint, which is not absorbed into the surface, but rather moves around on top of it until it dries, and once dry is neither absorbed or mixed….

Nobuya Hoki’s paintings—limited to a polychromatic threshold of greens, blues, and burgundy reds—emerge with animated gesticulation; an ensemble, a flurry of blurs, diffusions, cuts, and diverging lines.

The artist wields two brushes at once, in the style of Nihonga, or double line drawing, through his own mysterious inventions. The brushstrokes, depending on the speed, thick or thinness, medium or color of paint, determine the variability within each canvas. This transfer of hand (body) to brush (oil) onto another bodily form (canvas) defines Hoki’s distinctive tripartite construction method.

Concerned with the history of Japanese calligraphy and ink painting, Hoki considers the “unerasability” of aesthetics, a term coined by the artist himself. At the faintest touch, ink pressed upon a surface absorbs smoothly and quickly. Any trace of a brushstroke vanishes; the ink and surface, once existing as two elements, integrate into one. Hoki, however, decisively separates each element on the surface as an autonomous entity. Hoki accentuates the spatial complexities possible within painting through the manipulation of oil paint, an exceptionally malleable and languid medium. The shifting oil pigments, broken by jaspe lines and pulsating densities, are suspended above the canvas. The oil clouds the canvas, yet is never absorbed.

Hoki indulges in the indexical; the movements of his body are imbued within the oil brushstrokes, and the brushstrokes themselves inscribe their own movement through the double vision effect of Nihonga. As opposed to a singular line, each stroke bears witness to its own shadow.

Hoki’s tableaus come forth as a chorus of vibrations across a hierarchy of planes. These ruminations on this unerasability through a series of tempestuous confrontations, between oil and canvas, melt together as abstracted landscapes. Hoki reduces or expands the size of canvas, accumulating a plentitude of works in different scales. Inextricably linked, the brushstrokes, performing as twin flames, ebb and flow, or swell, at the will of the artist's hand.

Diasporic intimacy can be approached only through indirection and intimation, through stories and secrets. It is spoken in a foreign language that reveals the inadequacies of translation. Diasporic intimacy does not promise an unmediated emotional fusion but only a precarious affection - no less deep, while aware of its transience. In contrast to the utopian images of intimacy as transparency, authenticity, and ultimate belonging, diasporic intimacy is dystopian by definition; it is rooted in the suspicion of a single home, It thrives on unpredictable chance encounters, on hope for human understanding....It is haunted by images of home and homeland, yet it also discloses some of the furtive pleasures of exile.


Heidi Lau’s new body of work titled Spirit Vessels was created in the wake of New York State’s Stay-At-Home mandate. While trapped inside the confines of her 500 square foot apartment, outside Covid19 devastated the vibrant city that Lau has grown to call home. This story hums with potency across the far stretches of our planet. Lau’s influential circumference is typically based around the idea of the monumental—with connections to empire, history and memorials. Given present conditions, these generative factors felt shaky, vulnerable, and too unstable to source from.

Rather, inversely, Lau succumbed to the depths of her own interior—which manifested as conversations prodding below the surface of physical and mental states. Corresponding to ideas of home and safety, explorations of intimacy were realized in ceramic architectural miniatures and vessels. As one of the oldest and most universal materials associated with productive and artistic labor, clay naturally lends itself to the expression of the human condition through material culture and the reconsideration of human activities at large.

“What if one can inhabit these vessels as a last resort? What do our bodies and minds have to look like?”, Lau provokes. These Spirit Vessels are gutted, overgrown, void of ground level doors or windows and grant no room for standing.

In a sense these miniature buildings are self-portraits, drawing from the influence of colonial architecture in Macau, which illustrate the passage of time with their own diminishing materiality. Ever since immigrating to the US at the age of 17, Lau developed the habit of taking non-artistic photos of buildings whenever she would visit family in Macau. Steering clear of the state-instituted monuments and UN heritage sites, Lau explores hidden alleys and deserted houses in the old part of town.

Starting a few years after the transfer of sovereignty of Macau from Portugal to the People's Republic of China (PRC) in 1999, Macau experienced rapid urban reorganization and rebuilding, at the expense of mercilessly erased neighborhoods. In constructing Spirit Vessels, Lau considered her own documentation and pieced together architectural elements from different buildings. Like a dream or distant memory colored with nostalgia, an exact copy can never be made because an authentic original never existed. Each molding, tile, ornamental iron window frame and the deliberate pairing of neo-classical columns with Song Dynasty green glazed roof tiles, silently bear witness to the “fateful ties' between a dying empire and new colonial power. Manifested almost 500 years ago, its echoes are still felt to this date.

The ceramic, architectural Spirit Vessels also reference mingqi: ceramic burial objects prevalent during Eastern Han Dynasty. During this period, models of real-life objects were placed in tombs to provide for the deceased, which needed real-life provisions for sustenance and reassurance in the afterlife. This was not the life-sized world of the scale created for Emperors, but a more humble, wanky and facsimile version for commoners. These vessels in some ways became an aspiration, and the blueprint of the underworld.Perhaps only spirits can truly inhabit and linger these spaces.