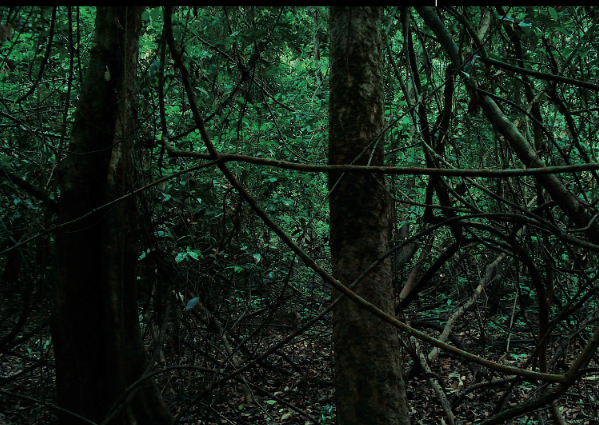 [By Appointment Only] Francisco Lopez: HYPER-RAINFOREST

As LA dives into peak wildfire season, HYPER-RAINFOREST takes on resonance as a document of the connection and tension between our ecosystem and our built society. As with Hennix’s Soliton(e) Star, Lopez proposes to the listener a version of what audio is, what a microphone can represent, and what it means to listen through these tools to audio extracted from incredibly rich nature atmospheres. He asks that we not understand the work as simulating anything of the “there” he experienced making these recordings, but as a new hyperreality created by giving attention to the work as a listener.

Lopez’s statement on the work:

“Rainforests are natural acousmatic environments: whereas they typically manifest an astonishing sonic variety and complexity, the sources of all those sounds are overwhelmingly invisible. ‘Hyper-Rainforest’ is an immersive sound work, presented in an installation form, that has been created from original environmental recordings carried out by the artist, along with an extensive and intensive experience of profound field listening, during a twenty-year period in rainforests all over the world. None of the sounds that can be heard in this work –even the most surprising and outlandish– have been processed or transformed. In stark contrast with the most traditional approaches of so-called field recordings, however, this work does not aim at reproducing or simulating any natural “reality” of those original locations. Instead, with a forceful compositional character, this work develops an elaborated and subtle form of hyperreality that strives to generate a self-sufficient sonic virtual world, solely created from those original recordings, with no transformation and with no added sounds, instrumental or otherwise. ‘Hyper-Rainforest’ constitutes a perceptual and existential rabbit hole that operates not through the recordings themselves in the usual representational sense but rather through the phenomenological characteristics of this sonic substance as sound-in-itself -with the same ontological status that any sound sources- as well as on its spatial-temporal organization and the multiple forms of its incarnation. With all its natural pre-composition features in multi-layered timbral complexity, spectral content, virtual inner space, and temporal evolution of environmental transitions.

This work is thus presented as a non-representational immersive experience where the traditional tools of illusion (microphones, speakers), typically used for mimesis or simulation, turn instead into ontological probes that generate hyperreality.

‘Hyper-Rainforest’ was originally developed in 2011 as a commissioned concert installation for the large Concert Hall of EMPAC in Troy, New York (Experimental Media and Performing Arts Center), with a custom-designed large-scale 80-speaker surround system around and above the audience in the dark. This is a 5.1 surround version of this work diffused to Black Hole’s 13.2 system. Previous site-specific presentations of the 5.1 mix have happened at Ars Electronica Festival in Linz (Austria, 2013) and at the Museum of Modern Art of Medellín (Colombia, 2018).


BLACK HOLE is not a gallery or a music venue, but an artist-run space to experience ways of listening and thinking about audio, sound, and music that require a forum of engagement distinct from the existing typologies. Time-based art takes time — BLACK HOLE is a space for that time to be materialized and formed with attention. BLACK HOLE is part of a continuum of alternative listening spaces nearly all of which have disappeared due to urban real estate speculation and a lack of cultural funding decoupled from the art market.

During the current COVID-19 pandemic, we accept groups of up to six listeners who are part of the same household or Covid 19 biosphere. Only one Session will be held a day. While it may seem that this format is Covid-derived, nearly this degree of intimacy was always our programmatic intent, our maximum planned capacity from the beginning has been 12.

BLACK HOLE has a collectized financial model. Donations made when booking will be split between direct payments to the author (35%), contributions to a collective commissioning fund distributed as a split to all BLACK HOLE co-conspirators every quarter (35%) and and to support the operating costs associated with the space and facilitation of Sessions (30%). We operate on a sliding scale from $10-40 per visitor for Sessions. Donations made independent of booking a particular appointment will be split between the commissioning fund and general operating expenses unless earmarked by the donor.

In addition to our physical location, we have a mobile sound system we will be using for impromptu sonic events, micro concerts, and agitation. In addition to projects we initiate, we also deploy this system on request for other nonprofits and organizers through our program LA AUDIO SOLIDARITY. A request form is available on our website and we will be announcing events with partners in the coming weeks, primarily through Instagram and our mailing list. .