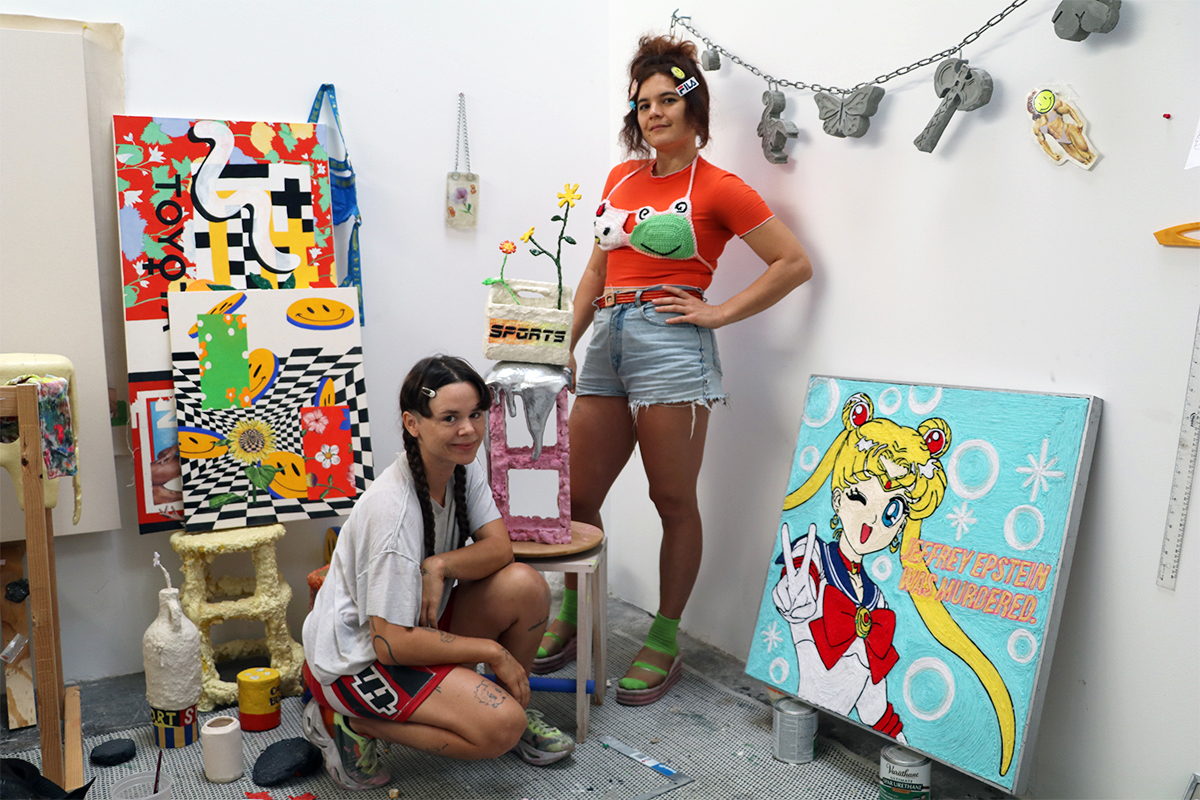 Ochi Projects
3301 W Washington Blvd, Los Angeles, CA 90018
Sep 08, 12 PM - 5 PM — ends Sep 21, 2020
Ochi Projects is pleased to present Normal Girl, a collaborative exhibition by Mikki Yamashiro and Machine McLaughlin. The exhibition is featured in our online viewing room from September 8 - 21, 2020. In this body of work the artists reflect on how Quarantine has mirrored their angsty teen years of isolation in Southern California–no car, stuck at home with nothing good on tv. The works share a sense of being trapped by the constructs of normativity, grasping for ways to express queer identity and political ideas, using the limited avenues available.

For Yamashiro, the exhibited works pull from the messiness and confusion of adolescence and the process of becoming politicized. Trying to find the silver lining when everything just feels fucked. Wondering what to say, when there is already so much being said. A grasping to understand a world that does not make sense, and trying to find a language of rage, when all that is available is pop culture. An overwhelming feeling, Yamashiro muses, "that despite all my rage I am still just a rat in a cage." Yamashiro's yarn paintings blend '90s and early 2000s pop-culture iconography with conspiratorial political captions, relating the practice to the contemporary memification of art, politics, culture, where everything is pushed to a point of over-simplification that becomes unable to hold nuance. Yamashiro frames her work as repackaging/rebranding what pop culture and media provide into something a little more complicated, something a little less consumable.

McLaughlin's work evokes similar experiences of being a preteen, a time when they felt their inner identity colliding with gender expectations. They fuse materials and imagery associated with both hyper feminine and hyper masculine presentation, creating sculpture in the form of sloppy trophies that celebrate this balance. Working across mediums, from painting to concrete, McLaughlin similarly employs iconographies from their youth, layering signifiers into teetering stacks of paper pulp, cinder blocks and other materials and collage-like canvases bursting with psychedelia-inspired patterns and pop cultural references of yesteryear.

Machine McLaughlin is an interdisciplinary artist residing in the Los Angeles area. They have shown work in the US, Canada, Mexico and the UK. They use recurring themes of strength, sport and masculine and feminine symbols as a challenge to conventional gender representation.

Mikki Yamashiro is a self-taught artist, performer and professional wrestler based in LA. She is a Libra, and thus contrary by nature. Her work is influenced by pop culture and craft. Yamashiro, ¼ of JUDY, a queer art collective was awarded the FUN Fellowship in the Social Practice of Nightlife by the Museum of Art and Design (MAD). Yamashiro has had work shown at, and/or performed at MIX Festival 2007(NYC), Art Basel 2008(Miami), Galerie Giti Nourbakhsch 2008(Berlin), Brooklyn is Burning 2009(Brooklyn), Hijinx 2009(Brooklyn),  the Queer Conscience Festival 2010(Brooklyn), the Queer Biennial II 2016(LA) and Killjoy’s Castle 2015 and 2019(LA and PA).
Tweet
Share