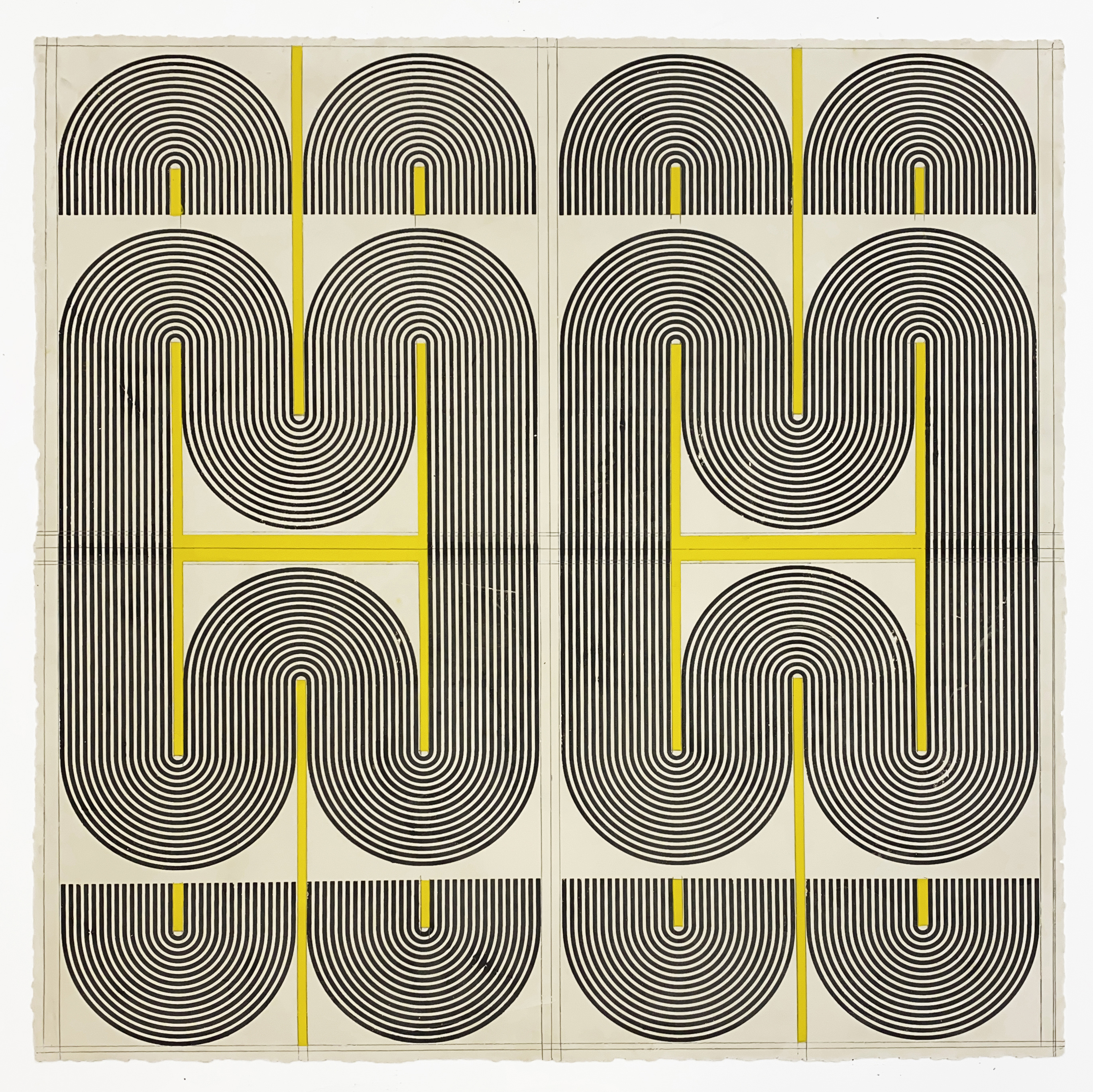 Over the course of her career, Elise Ferguson has become known for producing boldly colored op-esque abstract paintings that at first glance conjure the familiarity of retro logos, architecture, stylized text, “Op” and decorative arts. The core of her work has been focused on the development of a lexicon of intelligible patterns created out of intersecting lines and curves that result in tightly arranged geometric compositions. Upon closer viewing, the works resonate with an inherent physicality produced by silk-screened layers of pigmented venitian plaster. Both the patterned silkscreens and tinted plaster are made by the artist. Trace elements such as schematic pencil markings and visible scuff marks further attest to the contingencies of Ferguson’s hand in the process.

A Longtime admirer of the work of California ceramicists Doyle Lane and John Mason, in Maxwell Ct., Ferguson further explores her interests in California’s historical role in both sculptural formalism and functional utilitarian goods like those produced by the company Hanova of Pasadena; a company that produced popular items such as functional enamelware goods for the kitchen and home in the 1960s and 70s. The name of the exhibition, Maxwell Ct. refers to the street location of the Santa Rosa based enamel factory in California where Ferguson’s recent porcelain enameled steel sculptures were produced.

In the work of Elise Ferguson, the tension between hard-lined graphics and the warmth of surface irregularities- offers a visceral entry point and much needed relief from the current era of civilizations' digital operations.

ELISE FERGUSON ( b.1964 Richmond, VA) earned her MFA from The University of Illinois, Chicago in 1995 and her BFA from The School of Art Institute of Chicago in 1988. Her work has been exhibited extensively nationally and internationally with recent solo exhibitions at Romer Young, 57W57 Arts, Halsey Mckay, and Barton College Art Galleries amongst others. Selected group exhibitions include Massey Klein, Illinois State University, Able Baker Contemporary,Dieu Donné Papermill and Johannes Vogt Gallery amongst others. Awards and Residencies include the 2018 Dieu Donne Paper Variables Artist, the 2014 Northern Trust Purchase Prize; Expo Chicago Artist-in-Residence: Illinois State University, SIU-Carbondale, University Museum: Merit Award, MacDowell Colony and the Socrates Sculpture Park Residency. Her work has been featured in The New York Times, Artforum, The Wall Street Journal, Contemporary Magazine, Interior Design, Art on Paper, Modern Painters and Art News amongst others