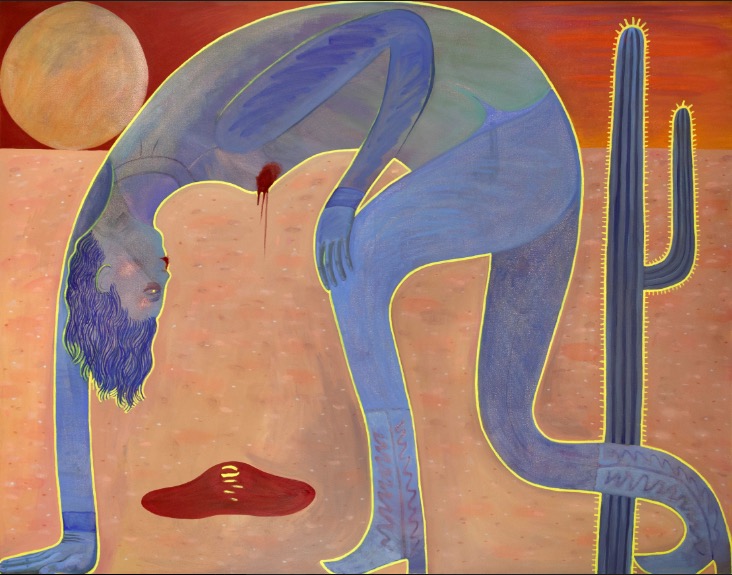 Alyssa Rogers: There's a Snake in My Boot

Monte Vista Projects is pleased to announce There’s a Snake in My Boot, Alyssa Rogers’ inaugural solo show. The exhibition will be open by appointment from October 31st to December 13th, 2020. Rogers’ work weaves folklore, historical accounts, and fiction to create a new mythology of the west where woman is hero, villain, and sage. Evelyn Estes, a young runaway, sets off on horseback to see the Pacific Ocean, only to be killed by the outlaw Maggie James, and resurrected next to the sea by the legend La Loba. The exhibition’s cornerstone is a series of three monumental paintings, each depicting a character in Rogers’ fable. A 65-foot painting on tyvek sits behind the paintings and creates an immersive western landscape interrupted by altars and drawings that act as snapshots from the story: a snake found in a boot, a dead rabbit, a magic spell cast with bones.

Alyssa Rogers (b. 1994, San Diego) is a painter and writer living in Los Angeles, CA. Her paintings of wild women staring into the eyes of lions, and unabashedly wrestling crocodiles confront the roles of women in the myths that shape us. Her work is primarily concerned with storytelling, and is especially influenced by film and television. Her narrative world-building often involves experiments in medium as a way of creating immersive painting installations.
Tweet
Share