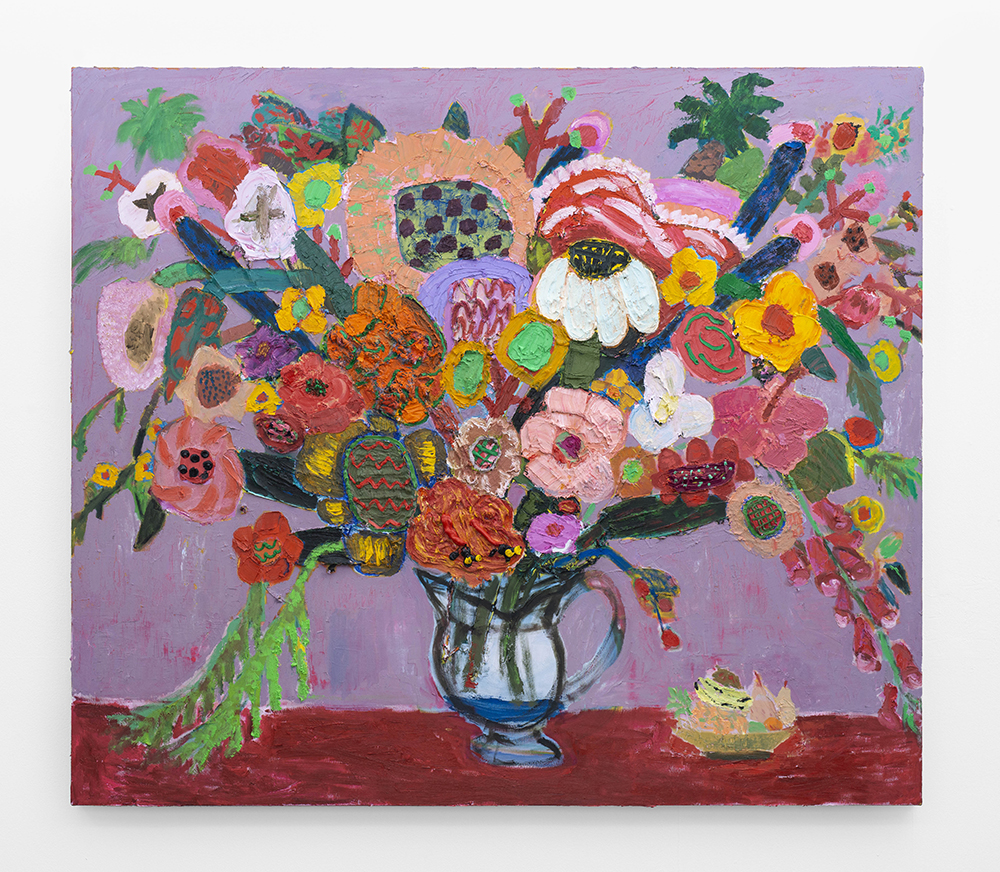 Nicodim Gallery
1700 S Santa Fe Avenue, #160, Los Angeles 90021
Oct 24, 11 AM - 7 PM — ends Dec 05, 2020
The Pleasure is Mine
Most frequently employed as a genteel response to “it’s a pleasure to meet you,” the phrase “the pleasure is mine” possesses a distinctly old-world quality. It harkens to a time when women would curtsy, men bowed and kissed hands, no one wore white after Labor Day, and ladies sipped tea with their pinkies outstretched. Today, folks have a sort of rote acknowledgment of these dated social constructions committed to muscle memory, but no real-world cognizance of their actual purpose or meaning. Georgina Gratrix’s work is not concerned with those days, however, but rather the present’s interpretation of those days, when history is viewed through the lens of a Google browser and context is nonexistent.

Gratrix’s The Pleasure is Mine delights in the awkward, charming clumsiness of attempting to mind one’s manners in the present day, when manners are all but obsolete. The gallery is an anarchic arrangement of colorful canvases in Gratrix’s signature heavy impasto, paying homage to her contemporary inspirations and the canonical masters that preceded her with equal credence. Hypothetical rock bands, television stars, and people no one likes are portrayed with the joyful irreverence of an alien being seeing such creatures for the first time. Massive, larger-than-still-lifes nod to that historical tradition, while the artist joyfully depicts members of the 1998 Chicago Bulls championship team with the same vigor. Her “The Three Graces” are as much Ab-Fab as they are Raphael or Rubens. Having freed herself from the confines of strict representation as dictated by linear academia, the pleasure, really, is all hers.

At Nicodim Upstairs:
Nine Weeks
For Nine Weeks, Gratrix turns her focus onto herself. One work in sixty-three parts, the piece consists entirely of a series of one-completed-daily watercolor self-portraits created during South Africa’s military-enforced quarantine. Implemented as an instagram project as a means of connecting to the outside world—leaving the house, even for a walk was forbidden by law except during state-sanctioned times dictated by the government—the titles of each day’s work on paper offer first-person views of a somewhat universal experience. Taken as a whole, the artist’s portraits are a maddening glimpse at the evolution of identity under quarantine.

Georgina Gratrix (b. 1982, Mexico City, Mexico) grew up in Durban, South Africa. She studied at the Michaelis School of Fine Art, University of Cape Town, and graduated in 2005, specializing in painting. She was recently awarded the Discovery Prize at the 50th Anniversary edition of Art Brussels, for her presentation with SMAC Gallery. Gratrix is a recipient of the Ampersand Fellowship Award and completed her residency at the Ampersand Foundation in New York City in 2018.
Tweet
Share