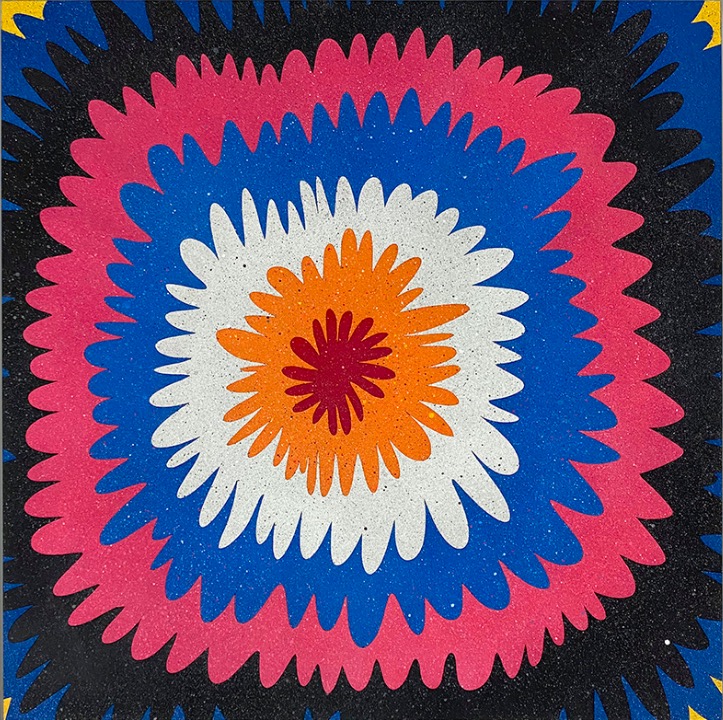 Steve Turner is pleased to present Triple Play, a three-person exhibition featuring new abstract works by Paolo Arao, Rhys Coren and Erin O’Keefe. While figuration has eclipsed non-objective work during the last few years, these three artists demonstrate that the field of abstract painting is also expanding in interesting ways. Bold in color and composition, made of atypical materials and using innovative processes, their works convey joy, play and experimentation while presenting visual conundrums that are not easily solved.

Paolo Arao presents sewn paintings that incorporate the patterns and colors of Philippine textiles from a queer perspective. They relate to Hard Edge Painting, Op Art, Pattern and Decoration, Supports/Surfaces and American quilt making. Made with commercial fabrics, repurposed clothing, hand woven fibers and weathered canvas, they convey history and intimacy. Drawing from the textile tradition of the Philippines, Arao uses the triangular format to suggest a torso or a shield, a diamond shape to symbolize a protective and watchful eye and he adds a patch of a different color or pattern as a traditional Philippine lucky charm.

Rhys Coren is presenting paintings that can best be described as painted marquetry. They consist of numerous pieces of MDF board that he paints separately and then fits together like a jigsaw puzzle. Because of his meticulous process, there is only a hairline of space between the pieces. His textured surfaces are achieved by a variety of spray-painting techniques–he varies the distance of paint spray, the temperature and the pressure. Once everything is painted, he assembles the pieces in a tray frame and glues them together. His titles (Forty-five Played at Thirty-three and I Turned Around When I Heard The Sound) connote the link to sound in his images.

Erin O’Keefe is presenting colorful abstractions that encompass painting, sculpture and photography. She creates objects in order to photograph them, including wood-blocks and panels painted in bright colors that she arranges under various lighting conditions so that brush strokes are visible and so that the resulting shadows create geometric forms. With skillful lighting and photography, serendipity and chaos, O’Keefe transforms real objects into brightly colored two-dimensional geometric abstractions. Her final output is a unique archival pigment print, that, by being unique, bolsters her connection to painting.

Steve Turner is pleased to present Yesterday, a solo exhibition by Los Angeles-based Paige Jiyoung Moon that consists of intricately rendered paintings depicting memories of the artist’s pre-Covid life. Most depict special experiences such as trips to Catalina Island, Zion National Park, Bryce Canyon or the pyramids near Mexico City. Others depict more mundane scenes such as her husband driving golf balls or a group of friends painting the walls of her house. Moon does not always follow rules of perspective or scale, but that does not diminish her paintings. They have an innocence that shines through, recalling a more carefree time. In a Los Angeles Times review of Moon’s 2019 solo exhibition, Leah Ollman wrote:

“[Moon’s] honesty also injects a queasy contradiction with weighty import: The very kind of intense scrutiny of experience that Moon practices in composing these paintings is exactly what extensive time on the small screen disallows. Her manner of crisply and comprehensively transcribing the visual world might seem a thing of the past, but it is her patient, immersive, voracious way of seeing that is the real lost art.”

Born in Seoul, Moon moved to the United States to study at Art Center, Pasadena from which she earned a BFA in 2012. She has had solo exhibitions at Steven Zevitas Gallery, Boston and La Luz de Jesus, Los Angeles. This is her second solo exhibition at Steve Turner, Los Angeles.

Steve Turner is pleased to present Mano Sin Hora, Joaquin Boz’s fourth solo exhibition at the gallery, consisting of new small-scale paintings that he created in his Buenos Aires studio during 2020. This marks the first time that Boz is presenting works in the United States that he created in his home city. In the past, Boz has organized his studio practice to include lengthy stays in different cities (Los Angeles, Mexico City, New York and Brussels), both to combat the obstacles of developing a career in isolated Argentina and to absorb the many subtle influences of different urban experiences. The new works, while similar to those he has presented in Los Angeles, vary in one obvious way: They are small. According to the artist, he was feeling a bit overwhelmed by the larger formats of the past and wanted to experience his own physicality in a different way by working small. “I wanted to change my way of painting, to have more control, to change the line. I wanted to be free to repaint the painting several times if I wanted. I wanted to try new colored backgrounds. Mano Sin Hora describes the new freedom I found, enabling me to use a slower rhythm to pursue another layer of subtlety.”
Tweet
Share