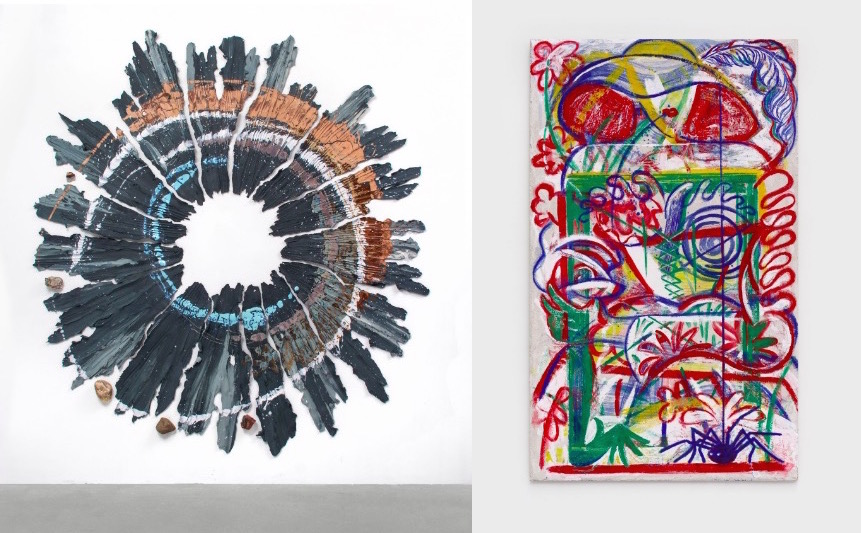 Night Gallery is pleased to present Spiraling Open and Closed Like an Aperture, an exhibition of new ceramic sculptures and photographs which document ephemeral, site-specific works by Brie Ruais. This is the artist’s second solo exhibition at Night Gallery. To mark the occasion she has written about the works to be shown:

My work pulls the viewer in relation to the Earth. It is a conduit for emotional and physical connection, a channel for listening, healing, rejoicing, grieving, nurturing, and transforming. My work began ten years ago in an endurance- and process-based approach where I worked with the equivalent of my body weight in clay and my body functioned as the only tool. The pieces are abstract, results of a language of movement I’ve developed through intuition and metaphor. Over the years the work has evolved in meaning through various relationships: my physical relationship to the material, my relationship to my environment, the clay’s relationship to the earth, and the work’s relationship to mapping.

This current body of work began its development four years ago with a solitary road trip through America’s deserts. Crisscrossing Utah, Colorado, Arizona, Nevada, and New Mexico, I was looking for a home for my work beyond the confines of the white cube, a place where the work could be in dialogue with the Earth. I found that home in the Great Basin Desert of Nevada and have spent time each year working there ever since. In forming a relationship to the Great Basin, I have experienced how the commitment and investment in a specific place has allowed my work to evolve in ways I couldn't have anticipated. I am now making ephemeral raw clay pieces in extraordinarily remote desert locations and using a drone-mounted camera to document the work. These desert experiences feed into the ceramic sculptures made in my Brooklyn studio, where new movements are informed by the body’s memory.

The ceramic sculptures in this exhibition are a continuation of my endurance-based project. Here, my own weight in clay is shaped in relation to the landscape, in some cases incorporating found materials from these sites. Expanding, Circling, Protecting, 127lbs includes a ring of found stones around the central ceramic component, creating two overlapping entities. These stones traveled from a New Mexican mountaintop called the Pedernal, an abandoned mica mine near the town of Ojo Caliente, and a lava field near The Trinity Site where the first nuclear bomb was tested. Torn into twelve sections, this work is a clock that cannot keep time, whose mechanisms are shifting and unclear. It is the memory of a crater in the ground and the countdown to an explosion in the sky: human utterances recorded by deep time and deep futures.

Elsewhere in the exhibition two long horizontal gestures flank the folds of Currently Halted Tide (130 lbs versus 180 lbs), mimicking the expanse of the desert horizon line within the gallery space. This piece was shaped by the action of compression. Two people spread out their body weight in clay (me, 130 lbs.; another, 170 lbs.) on the floor at opposite ends of the room. Facing each other, we pushed our material towards each other, each form nesting into the other as it gathered and compressed. I cultivated this gesture of compression in response to the urban space surrounding me, on an island pressed between land and sea, where the human relationship to space and nature is determined by the real estate market. This experience of compression could only be countered by the memory of the expansive Great Basin desert where one’s sightline rests easily on the distant and uninterrupted horizon. The human figure here is so singular and so small, it disperses easily into the landscape of sagebrush shrubs, rendered nearly invisible in relation to its vastness. These two forms (perhaps human, perhaps geological) are transformed by forces that act upon them.

These sculptures are in dialogue with a series of aerial photographs which frame ephemeral clay works within the desert landscape. The works are made in response to paths, or desire lines, that zig zag over the land. These paths tell the stories of animals, people, and water, revealing motivating factors like access to resources and colonization. If these traces of movement tell the stories of desire, my work responds with a love letter, with compassion and vulnerability. They are left to weather and disintegrate over time, sometimes photographed one year later when all that is left is a hazy red patch of clay, desiccated by the sun. The process and aftermath is photographed and filmed from above, revealing a bird’s eye perspective of the pieces’ relationship to the terrain.

These photographs reveal the ways in which a body is in relation to its surroundings. The ceramic sculptures in the show, meanwhile, are in relation to the viewer’s own body, offering movements that hold, expand, open up, protect, and envelop. The photos contextualize the ceramic sculptures in a new way, opening the works (and the viewer) back up to the physical world from which they came.

Night Gallery is thrilled to present Egg and Dart, an exhibition of new fresco paintings by Anna Rosen. Rosen was included in Night Gallery’s first-ever exhibition, Private Life, in 2010, and this will be her second solo exhibition with the gallery.

Anna Rosen’s frescoes build up a symbolic order through a type of painterly wordplay. Her paintings find delight in disguise: walls, vessels, frames, and costumes recur throughout these works, evoking containment, concealment, and transformation. These tropes suggest unseen (perhaps unseeable) truths, carried into being by illusory exteriors – but the exteriors are all we see. Some of these details, in particular the nineteenth-century garments, create an experience of uncanny time travel for the viewer. Are we witnessing a scene from another time, or a reenactment? Rosen’s new work builds up imagery in layered constructions that repeatedly reorient the picture plane, offering nothing but the false face. Painted onto limestone surfaces, which the artist lays like cement, the works become facades of facades, finding a new layer of veneer behind every surface.

The notion of the binary is integral to Rosen’s play of symbols. The exhibition takes its title from a style of ornamental motif found in architectural mouldings that can be found through history, through to buildings through the present day. Though not overtly representational, the egg-and-dart design takes its name from respective symbols of birth and death, rendered in iconographic simplicity. Implanted within architectural embellishments, these adornments stealthily inscribe structures with the primary forces of life, presented as an abstracted repeating pattern. Rosen’s new body of work takes inspiration from this innocuous leitmotif of humanity, contemplating its perplexing status somewhere between profundity and frivolity, being and void.

Rosen’s palate also speaks to polarity, working within the limitation of four colors – red, blue, yellow, and green – each one embodying an essential extreme. Painting unmixed pigment directly onto the surfaces of each fresco with only water as a binder, the works operate within terms of chromatic antitheses, opposites sharing the same composition. However, Rosen’s work playfully incorporates passages of white limestone on the top surfaces of her compositions, reminding the viewer of another binary, between substance and absence.

Rosen’s works are painted paradoxes, deceptively spirited compositions that overlap embellishments toward a contemplation of meaning. Setting up the tension between adornment and essence, Rosen reframes decoration as a site of philosophical inquiry. Her symbols are, on the one hand, self-negating, sites of falsity and diversion; on the other, they are sites of creation, enshrining and carrying forward a human story. Like the egg and the dart, Rosen’s work makes graphic the rhythmic dissonance of life’s primal forces.
Tweet
Share