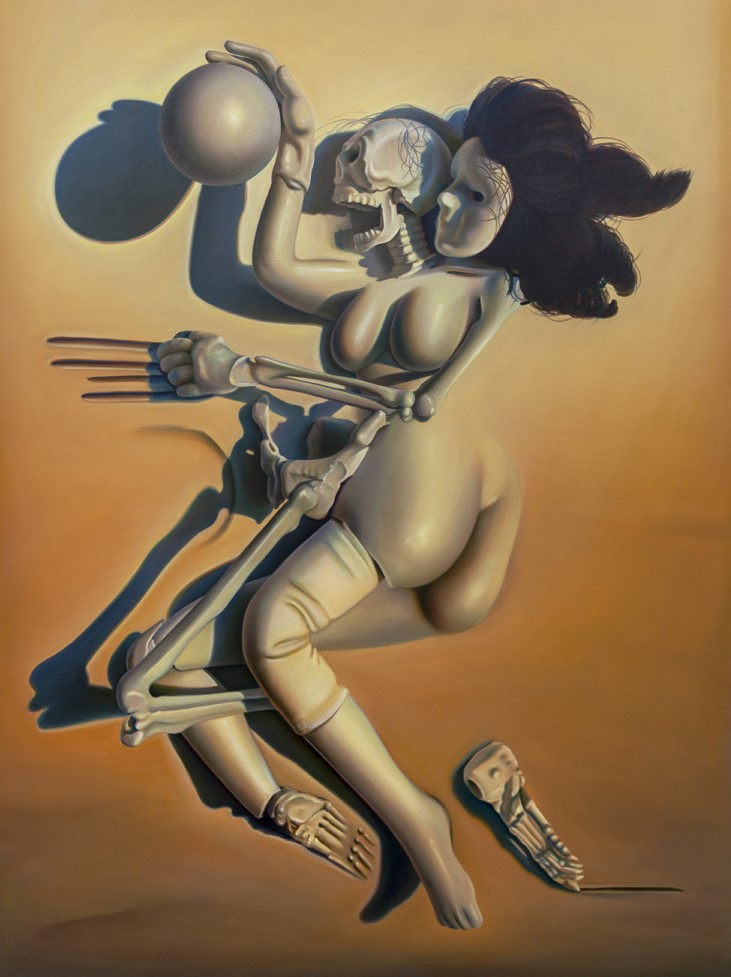 Rendering sculptural arrangements of souvenirs and junk drawer trinkets, Satlowski makes use of how oil on linen can create a convincing illusion while simultaneously revealing itself as a thin construction. For example, "Me Worry (2020)" is composed of a glass picture frame, an iron-on patch, and a few scattered kidney beans. This meditation on sustenance and frivolity references the historical still-life and its commitment to both the material and ineffable. The glass frame inside a frame draws attention to the picture plane as both window and wall. Invoking self-aware cinematic techniques, the sculpture casts a shadow on a curved backdrop, theatrically and apocalyptically projecting an eclipse onto a dirty white sky. The bromide “Me Worry” on the patch alludes to Mad Magazine’s postmodern conditioning of middle-class American adolescents, and more generally how the body processes richness and scarcity.

In several figurative works, Satlowski reaches deeper into the realm of the surreal and the psychological, revisiting objects of affection with cold clarity. "Strings and Horns (2020)" provides a fleeting vision of two porcelain dolls as they ascend into a white light that is frighteningly devoid of context. The scene is imbued with traces of memory and psychological projections; still, it does not look back. At times Satlowski’s tone is elegiac as she pays homage to memories she can no longer cling to nostalgically, picturing them now in a more complex, adulterated light. "Bad Santa (2020)," an eerie depiction of a holographic Santa Claus sticker, manifests the shadow self, diffracting eagerness and dread. Throughout the exhibition, faceless figures suggest the temporal nature of all things as soon as one attempts to contain or embody them.

Dueling perspectives on forward and backward motion appear in each of Satlowski’s paintings. In "Desert Landscape (2020)," a bionic female ball player is seen in fragments, partially buried in a sandy desert (like Han Solo frozen in carbonite) fading into a thick, polluted atmosphere. Emerging from this inhibiting substance, reaching out to make an energetic play, flesh falls away and machine limbs stall. The skeletal structure, the engineering underneath the vinyl, is exposed. In the 1980 essay "Throwing Like a Girl," Iris Marion Young investigates how social norms governing female bodily comportment yield an inhibited intentionality; in the act of tossing a ball a little girl is held back by forces inside and outside of herself. Young calls this lived contradiction “ambiguous transcendence.” Satlowski’s painting of a dynamic yet broken figure assembled from organic and synthetic materials refreshes this concept, entangling nature and culture. This work provokes a tug-of-war between imprisonment and escape, quest and mortality, what was and what might be.

Lauren Satlowski’s paintings offer a simultaneous sense of in and out-of-body experience. Her precise study of the play of light on the surface of an object, and how light transfigures, offers a parallax view that instills an unexpected lucidity, and maybe even a liberation of the body. This gesture is particularly compelling at a time when we are bound by restrictive conditions that change every day. Any attempt at comprehending the contemporary is like watching a bouncing ball: unstable yet boringly predictable. On Satlowski’s canvases, the game begins when the referee throws the jump ball. She constructs spatialities for beings that can never really be contained, transcending gravity.

Lauren Satlowski (b. 1984, Detroit, MI) lives and works in Los Angeles. She received an MFA from Cranbrook Academy of Art (2013) and a BFA from Wayne State University (2009). Her work has been presented in group exhibitions in Los Angeles, New York, Mexico, and Europe. Satlowski has held solo exhibitions with DM Office, Paris, ODD ARK and Embassy in Los Angeles, and Wasserman Projects in Detroit. Her work is in the permanent collection of the Los Angeles County Museum of Art and X Museum, Beijing.
Tweet
Share