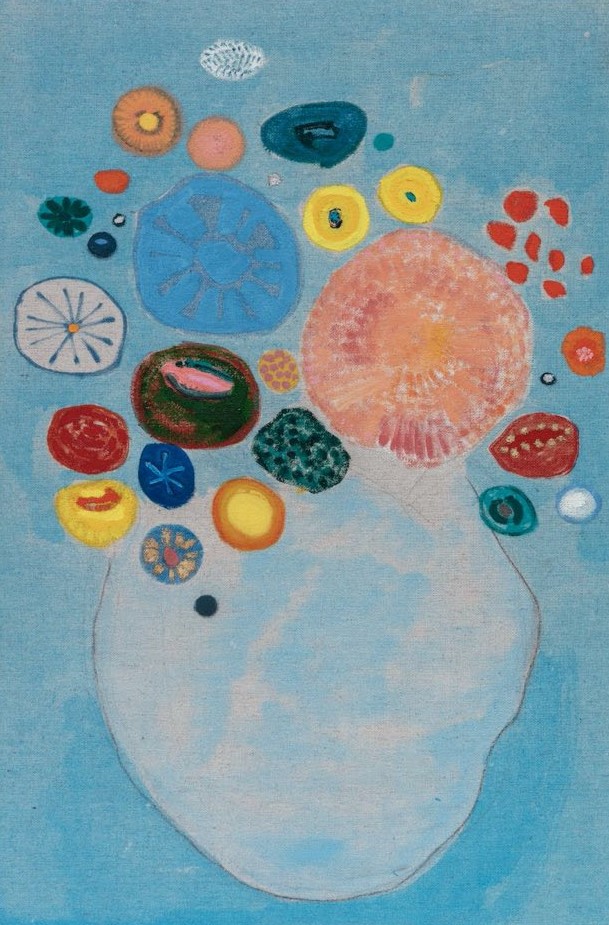 The Landing is pleased to present 'Feel Daze,' our second solo show of paintings by Ryan Fenchel. Like the works in Fenchel’s first exhibition, “Odd Bouquet,” these paintings feature a central character—an anthropomorphized vessel Fenchel calls “the adept,” who is involved in an ongoing process of spiritual transformation. References to magic, esoterica, and mysticism are central to these works—evidenced in set-pieces like the night sky, heavenly bodies, disembodied eyes, and rabbits being lifted from hats. What’s new in this grouping is the use of oil paint; in the past, Fenchel created his charged, mystical compositions using oil stick and a drawing process. Like many, Fenchel used the time during quarantine to try something new; Fenchel began working—for the first time—with a paint brush, and with oils. What results is a group of works in fantastical, bold colorations—carnelian, gold, all shades of the night sky, emerald, poppy—enlivened with a sense of perpetual movement and apparent expansion.

Each of these paintings features either an empty vessel—often anthropomorphized as the figure of the adept—or a floral arrangement in a vase. The empty vessels represent the project of the creative process: the act of creation. The bouquets represent the result of the creative process: what is created. In one work, the adept—the vessel-figure—holds a bouquet, and stares at it with apparent wonder—a representation of the process marveling at its own result.

These paintings resonate with the works of the spiritually-minded Surrealist painters of the Western tradition, like Odilon Redon and Wassily Kandinsky. The bouquets, especially, function within the canon of the still-life bouquet—but they bring to that formal tradition a perpetual sense of movement: they infuse the sense of ever-expanding life into the fixed situation of cut flowers. Some groupings of blooms are surrounded by radiating lines that seem to represent energy fields and continuous movement. The substance of these bouquets is ever-expanding: the flower’s heads hover and widen, like gaseous bodies in deep space. This perpetual movement mirrors the ever-becoming and ever-expanding of the spiritual process as experienced by the individual.

Everywhere, there is a playing with scale. In some paintings, there are resonances with deep space—with nebulae clouds, with starbursts, with the rings around planets; elsewhere; amoeba-like forms bring to mind the minuscule: something you might see under high magnification in a petri dish.

References to Ikebana, the Japanese art of flower arranging, also abound; a branch of cherry blossoms is represented in one painting; elsewhere, patterns bring to mind Japanese woodblock prints and traditional Japanese fabrics.

The exhibition’s title references the intense times in which this group of works was made: most were painted in quarantine. “I chose ‘feel’ for the emotion and intuition connected to my creative process,” says Fenchel. “And ‘daze’ for the ether looming over that intuitive process.”

There’s the whimsy of lighthearted elements, like the rabbit-in-hat references to mainstream magical practice, in these works; elsewhere, there’s the masterful, and even traditional, feel of the realized bouquets, and a general resonance with the painterly canon.

Ultimately, these paintings are a representation of the process of their own creation: both the toil and the toil’s result. But they’re also a representation of the spiritual becoming that has built their maker. “The painting process is parallel to an alchemical process,” says Fenchel. “It’s about learning from the materials. It’s about learning from a mistake.” Always, in these works, the process of becoming is taking place.

Ryan Fenchel has had solo shows in Chicago at Carrie Secrist Gallery, Dan Devening Projects, and Vega Estates, and in Seattle at the Department of Safety, and has been included in group exhibitions in New York, Chicago, Los Angeles, Tokyo, Berlin, and Philadelphia. He holds an MFA in Art Theory & Practice from Northwestern University and a BFA in printmaking from the Kansas City Art Institute. The artist's regular trips to Japan have informed the aesthetics of his visual decision-making, as has his deep interest in the occult. He's currently based in Los Angeles.
Tweet
Share