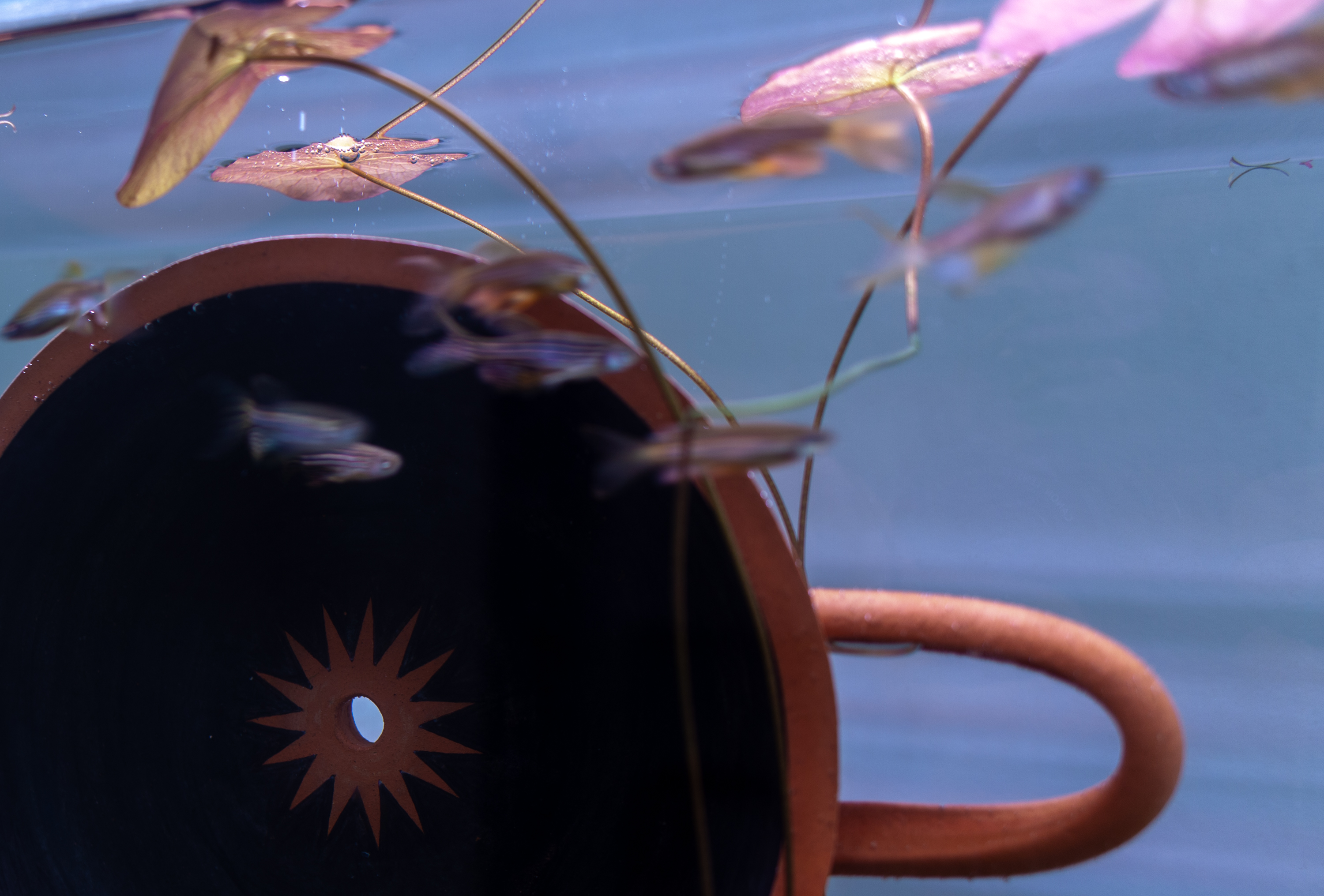 Cammie Staros: What Will Have Being | Michael Stamm: "so super sorry sir!" 👀

Shulamit Nazarian is pleased to present ​'What Will Have Being​,' a series of new sculptures by Los Angeles-based artist Cammie Staros. This will be the artist’s second solo exhibition with the gallery.

The artworks in ​'What Will Have Being' ​draw the relics of fallen empires into discourse with contemporary political and environmental instabilities, considering the legacy of our species on this planet. Creating a throughline between ancient past and possible future, the works suggest a museological exhibition of antiquities that has been forgotten and reclaimed by nature. Through twists on Greco-Roman works in ceramic and stone, and gestures that upend traditional display tactics – such as melting light fixtures, architectural interventions, and submerged vessels – the artist asks us to consider how we understand both the objects and ourselves along an unfixed or perhaps unmoored timeline.

Central to the exhibition is a series of vitrines that function as life-supporting aquariums. These self-illuminated display cases reference those found in the Greek wings of the Met and the British Museum. Inside, immersed in an environment of fish and plants, sit ceramic sculptures reminiscent of Greek vases and wine cups. The submerged ceramic forms appear distorted or conjoined, their zoomorphic shapes adapting to their watery habitats, as if sinking back to an organic state. The use of water contrasts the precious materials of art with those of life, and summons the existential threats of flood and drought. The drowned museological display flattens historical time, simultaneously referencing the ancient past, later underwater discoveries, and an impending ecological and environmental reckoning.

A new series of ceramic pot sculptures are transformed through the act of cutting, splitting, and twisting. Here, Staros pushes the boundaries of the material until the vessels become shell-like – undoing the object. For these intimate and vulnerable forms, and throughout the exhibition, the artist classifies her works using a poetic Latin taxonomy, as if identifying rare specimens in an eccentric natural history museum. Staros addresses the fragility of human power by making a cross species analogy of things we creatures leave behind.

A pair of stone wall works evoke classical ruins through the contrast of highly polished arches and rough, natural edges. Veins and cavities in earthy green onyx lend a sense of dissolution to otherwise architectural forms. Stone, a material parallel to ceramic in the legacy of the Greco-Roman world, is also formed by nature and shaped by humankind; it is the material of the planet and of ancient ruins; it is a fossil of both past geologic forces and past societies. In addition, the artist will present a group of new neon pieces installed directly into the gallery’s light grid. Fitted specially for fluorescent ballasts, these neon artworks glow in otherworldly colors and droop out of their fixtures, evoking unknown forces on a space left behind.

Over the past decade, Staros has investigated the ways in which classical antiquities have come to represent an origin story of Western art history. While continuing to address the historical narrative surrounding these objects, the body of work in 'What Will Have Being' focuses more on the prescience of ancient artifacts – how their treatment might foretell a possible future of today’s objects. Relics and ruins, which outlast the societies that made them, emphasize both the achievements and the hubris of humanity. But by shifting our contextual understanding of these objects, by considering how meaning is made, we can begin to understand an alternative narrative. The works in 'What Will Have Being' not only question our understanding of contemporary political and environmental instabilities, they also poignantly consider how our current moment will be remembered, and what kind of world it will produce for tomorrow.

Cammie Staros (b. 1983, Nashville, TN) received her BA from Brown, Providence, in 2006 and her MFA from California Institute of the Arts, Los Angeles, in 2011. Staros has had solo exhibitions at Shulamit Nazarian, Los Angeles, Lefebvre & Fils, Paris, and Ghebaly Gallery, Los Angeles. The artist was included in the Craft Contemporary’s second clay biennial in Los Angeles. Staros’ work is featured in 100 Sculptors of Tomorrow, a survey of contemporary sculpture, authored by Kurt Beers and published by Thames & Hudson. Staros was awarded the Guggenheim Fellowship award in 2020.

"Why do people stay attached to conventional good life fantasies… when the evidence of their instability, fragility and dear cost abounds? Fantasy is the means by which people hoard idealizing theories and tableaux about how they and the world “add up to something.” What happens when those fantasies start to fray - depression, dissociation, pragmatism, cynicism, optimism, activism, or an incoherent mash?"
- Lauren Berlant, Cruel Optimism

Shulamit Nazarian is pleased to present ”so super sorry sir!”, a series of new paintings by New York-based artist Michael Stamm. This will be the artist’s first solo exhibition with the gallery.

The paintings in “so super sorry sir!” revel in their idiosyncratic, contradictory attitude toward morality, sexuality, mental health, and contemporary cultural politics. They feature an unlikely cast of characters––ranging from the Devil to an anthropomorphic hand–– whose disparate senses of virtue and spirituality often clash with societal convention. At once clinging to life and hurtling toward annihilation, the artist questions what self-actualization looks like in the face of an overly righteous and emotionally precarious world.

The Devil appears as a surrogate for various archetypes––a conspiratorial friend, a scorned enemy, or at times, the artist himself. He is at once a foe to be vanquished and a sly, picaresque hero, providing an infinite set of entry points for the viewer to project their own definitions of “right” and “wrong”. In the titular painting of the show, “so super sorry sir!”, the Devil takes the role of a hysterical martyr, at once offering his patriarchal tormentor a flower, while stabbing himself with a sword. The painting reimagines a memory of a forced apology extracted from the artist by a homophobic teacher. Instead of flatly submitting, the Devil flamboyantly and sibilantly disobeys. Deploying icons of the Virgin Mary interspersed with images of historical gay villains, the work indulges both the aggression of sarcastic defiance and the kinky masochism of self-flagellation. Throughout the exhibition, the Devil, ever at odds with his environment and always nude, exuberantly plays out the iconoclasm of being a queer person. This dissonant, ever-changing position associated with queerness may deny an easily resolved identity or moral stance but, ironically, is exactly what allows for the possible reconciliation of conflicting desires.

Turbulent aspects of the artist's own life inspire literal forms in the paintings ECT and Ketamine, two types of treatments for severe mood disorders. Here, the body is abstracted into outlines and shapes, reduced merely to a structure or vessel to be filled, effected and redeemed by external forces. In ECT (short for electroconvulsive therapy), fractured images of sunrises and sunsets suggest the ecstasy of returning from darkness, an ineffable capacity for pleasure that simultaneously evokes a specter of pain. In contrast, paintings such as Submission and Defiance use the body to evoke a quieter state of contemplation. Hands are anthropomorphized into the body itself, recalling intimate moments where we find ourselves on our knees such as in prayer or surrender, or standing in opposition.

Throughout Stamm’s practice, text highlights the talkative self-awareness implicit in his paintings. Whether functioning as the headspace of the artist, of the subject, or an omniscient voice, the use of text animates a thought into an object. In Ketamine, a K-pop music video the artist watched during an infusion inspires words written along the frame which read “Fun! My heart melts! Fun! Sweat Drips Down! Fun! Feels Dizzy! What’s wrong with me?”. Circling the figure like a lasso, as would a song maniacally stuck in our head, the text reminds us how obsessively and to what length we will go on our quest to induce a feeling of happiness.

In the painting "April 14th, 2018 (RIP David Buckel)", the literal representation of Walt Whitman’s text Leaves of Grass, connoting sensual praise of the human condition, contrasts the painting’s depiction of the death of well-known LGBTQ rights lawyer David Buckel*. Here, two men luxuriate in a post-coital glow while reading poetry to one another, their bourgeois interior punctuated by a lap dog, orchids and a bottle of poppers. Through the window and the tangle of body parts is the central focus of the painting: a man participating in self immolation as a final act of social and political protest. The friction of the two scenes questions what acts of radical opposition lay on the margins of queer intimacy and history—what hardness may, tragically, make queer intimacy possible. This painting, like many others in the show, attempts to complicate what acts we see as good, what feelings are worth celebrating, and what characters we ought to commemorate.

Together, the paintings in “so super sorry sir!” attempt the relatable quest of searching for peace and clarity by reconciling conflicting dimensions of our identity and autobiography. Facetious ‘sorry’s’ are counterbalanced by self-reflexive indictments of white gay men’s excesses. A desire to conform and be perceived as “good” caves to a desire to stand up to an authority figure for having misbehaved, or for being gay, or for failing to project or even experience happiness. Each work is part of a larger ambivalent prayer and perhaps, in the end, such a fraught and uncertain prayer is the only kind that exists.

*David Stroh Buckel (June 13, 1957 – April 14, 2018) was an American LGBT rights lawyer and an environmental activist. Senior counsel and marriage project director at Lambda Legal, he represented clients in many major LGBTQ rights related cases and was considered one of the architects of the freedom to marry and marriage equality movement”. At the time of his death, Buckel had become heavily involved in urban composting efforts. On April 14th, 2018, before dawn, he self-immolated in Prospect Park to protest the overuse of fossil fuels.

Michael Stamm was raised in Evanston, Illinois. He received his BA from Wesleyan University and an MA in English Literature from Columbia University before earning an MFA from New York University in 2016.

Residencies include the Skowhegan School of Painting & Sculpture (2016) the Vermont Studio Center (2016), for which he was awarded the John Imber Painting Fellowship, Yaddo (2016), the Mountain School of Arts, Los Angeles (2017) and the MacDowell Colony (2018). Stamm received the New York Foundation for the Arts annual NYSCA/NYFA Artist Fellowship in 2018.
Tweet
Share