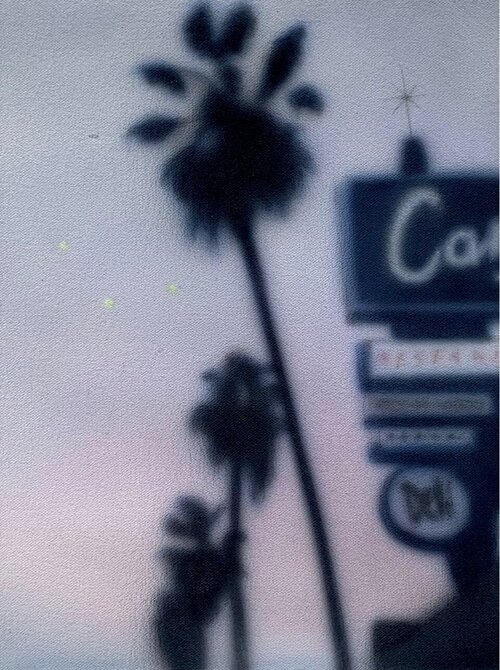 “In the threatening situation of the world today, when people are beginning to see that everything is at stake, the projection-creating fantasy soars beyond the realm of earthly organizations and powers into the heavens, into interstellar space, where the rulers of human fate, the gods, once had their abode in the planets...Under these circumstances it would not be at all surprising if those sections of the community who ask themselves nothing were visited by `visions,’ by a widespread myth seriously believed in by some and rejected as absurd by others.” — Carl Jung, Flying Saucers: A Modern Myth of Things Seen in the Sky

At the beginning of the COVID-19 pandemic the Los Angeles-born artist Aryo Toh Djojo— that’s ahr-ee-oh toe-jo-yoh, as the artist cheekily addressed the Indonesian phonetics of his name on a 2016 business card inspired by those of Ed Ruscha— was deep down the spiritual rabbit holes of Ufology, the investigation of unidentified flying objects by people who believe that they may be of extraordinary origins. Toh Djojo was especially intrigued by how widely followed religions and belief systems like Christianity and Buddhism were influenced by extraterrestrial beings.

“I don’t consider myself a Buddhist, but I meditate and read a lot of Buddhist texts and after I took DMT in September of 2019 the combination of those practices woke me up to higher dimensions,” says Toh Djojo. “I’d like to believe it was a higher entity, but who knows.”

As his expansive spiritual journey met the quarantine confines of Coronavirus, Toh Djojo, a lifelong skateboarder, abandoned his street-influenced exploration of abstract expressionism— he’d been making grip tape paintings and hyper-realist drawings influenced as much by punk conceptualists like Richard Prince and Harmony Korine as the graphics and advertisements in skateboarding magazines like Big Brother and Thrasher— to begin painting a series of loose, representational tableaux sourced from internet images of quotidian, if cinematic, Southern California mises-en-scène. Rendered with a dreamy airbrushed acrylic, Toh Djojo’s work investigates the liminal space between lived and perceived experience within Los Angeles’s car culture, commercial strips, celebrity obsessions, glamour holes, and expansive mountain and coastal vistas, each punctuated by flashes of extra-sensory lights and/or UFOs.

“What I want is to have the viewer question reality and, potentially, research more about this life beyond,” says Toh Djojo. “To most people UFOs are exactly what you see in the media: malevolent, mind-controlling invaders who are trying to take over the planet. However, I’d like to believe they are benevolent vehicles to help us transcend to a higher state of consciousness. Hopefully, my handling of the paint adds to that experience.”

Set against a time of divisive political upheavals, a raging global pandemic, and a constant stream of news headlines that question the depth of government knowledge of UFOs while also tracking sightings of unidentified monoliths, Aryo Toh Djojo: Transmission, curated by Michael Slenske, offers a nostalgic yet forward-thinking approach to this multiverse. One that not only pushes the boundaries of the artist’s technical medium—Toh Djojo doesn’t use any stencils or tape to create hard edges or plays of light, preferring a more immediate, intuitive process— but also tests the limits of one’s visual perception relating to these extra-sensory subjects, and interesting times.

Aryo would like to dedicate this exhibition to the memory of his Grandmother, Sumirah Surip

“I’ll see you again in the great beyond, Eyang.” — Aryo Toh Djojo