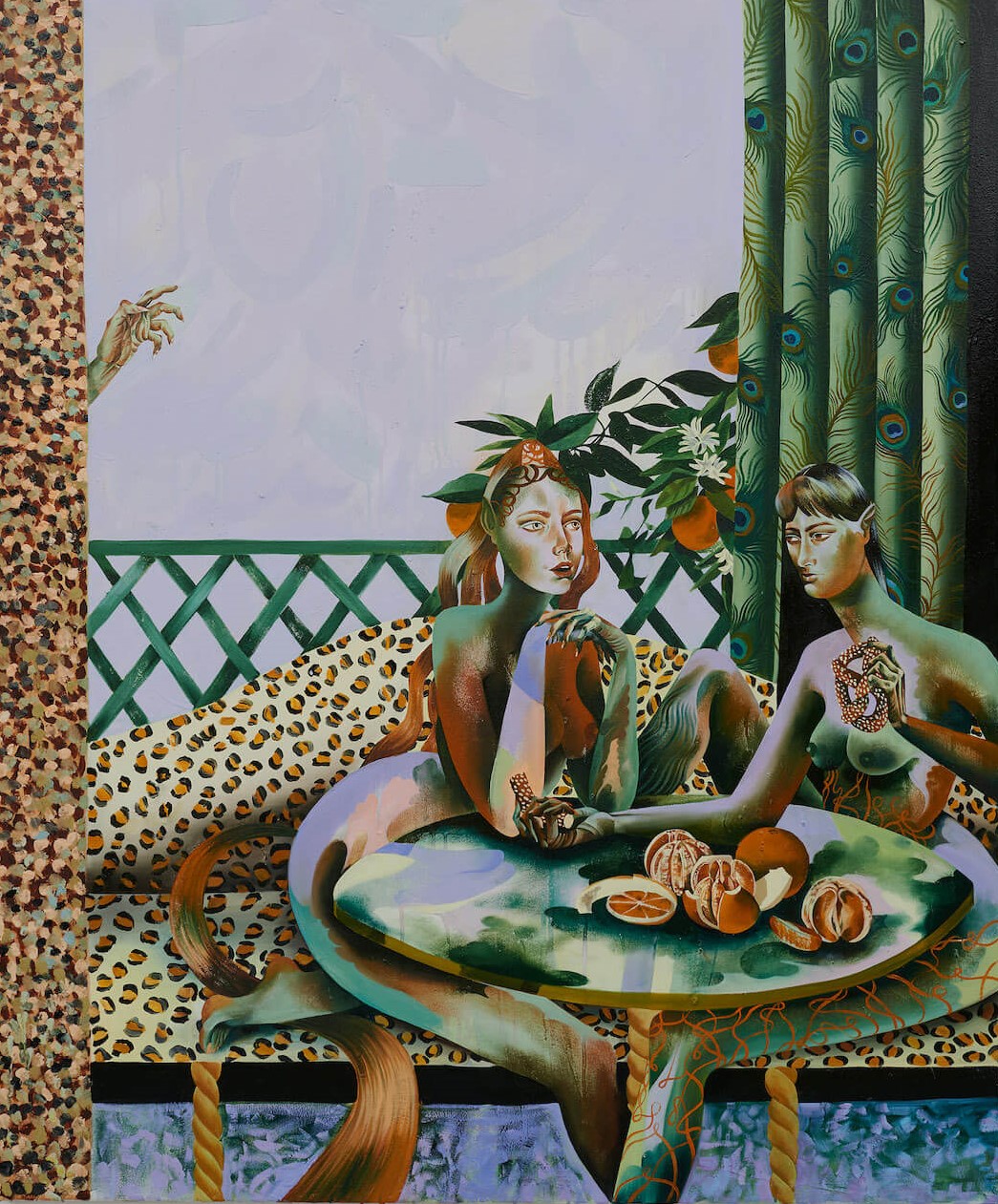 François Ghebaly is proud to present a solo exhibition of new paintings by London-based artist Jessie Makinson. Take a royal portrait and gum up the seating arrangements until no one knows who is supposed to go where. Rearrange the furniture. Remove the men. Dress the remaining characters in scarlet fishnets and creeping vines, leopard spots and peacock tones, pleats of impossibly sheer fabric that whisper over the body (one wonders if it is fabric at all, or something more organic, otherworldly). Add pretzels, oranges, champagne, tarot… Suddenly the eye is free to roam the picture plane without a map. Stuffy courtly values of grace, elegance, and authority are subverted by the glamour and energy of the canvas. A court with no hierarchy.

The title of the exhibition, 'Something Vexes Thee?' is a rhetorical question, at once sarcastic and decorous. It’s 'what’s up with you?' wrapped ironically in genteel robes. It is also what the witch asks of The Sheriff of Nottingham after his plans have been foiled once again by the trickster Robin Hood in the 1991 film adaptation of the English legend. Makinson’s painting of the same name is a decentered diptych crawling with potentially vexing vignettes. A couple of fighting dogs have upset a basket of peaches, a parlour game in a backroom equivocially suggests sensuous and sinister play, various limbs jut in and out of frames and doorways, suggesting narrow escapes. Along the right foreground, where painters traditionally place a repoussoir to gently guide the viewer’s eye back into the composition, the eyes of a steely, nymph-ish character gaze back at you over a crooked arm, annoyed, perhaps, at the intrusion. Makinson reimagines the hierarchical grid of the painting into a complex and generous container for many stories at once.

In her essay “The Carrier Bag Theory of Fiction” Ursula Le Guin explains how the vessel, as opposed to the weapon, is the earliest and most significant “cultural device.” What has been gained, she asks, by characterizing history as a spear, an arrow, a sword piercing lines of victims and losers that span the centuries? What if we see the human story as a container, a sack, a vessel allowing for the jumbled freeplay of many narratives at once? Jessie Makinson takes this as an invitation to muss up the fixities that haunt historical painting. Instead of villains, heroes, or even genres, she offers story—not as an escape from reality, but as a tool for imagining a new one.

Don’t Take This Too introduces viewers to Nkoth’s distinctively swirling brush, his layered, vivid palette, and his iconography of figures drawn from both fantasy and memory. Each canvas starts with a wash of pigment that flows in swaths of vivid color, over which Nkoth defines the subject’s posture and features, allowing the initial sprawl to shine through as an inner iridescence. Constructed of fluid, twisting contours, Nkoth’s figures often look captured in the process of formation, reached for as one reaches for a half-collapsed memory or a dream upon waking.

At the heart of the exhibition, two family portraits depict aspects of Nkoth’s personal biography through a filter of fiction. One is a diptych of two conjoined canvases, showing a family of six, at ease together around a living room. The other is a singular canvas—a mother, a father, and a son on the porch of a house. Nkoth’s own family is separated by an ocean, and his personal history tracks his migration at age thirteen from his mother in Yaoundé, Cameroon to his father in South Carolina. This displacement is a pivotal event in understanding Nkoth’s exploration of Black identity—both African and African American with a cultural mixedness that speaks to the joint status of insider and outsider. These depictions of family life show an idealized unity, yet Nkoth embeds the potential of dissolution into each—the diptych’s seam of two canvases meeting; a pair of garden shears lying threateningly in the foreground.

Elsewhere, in the exhibition’s title painting, a nude male figure sits on a stone, clutching a chicken tight to his chest. For Nkoth, the chicken stands as an emblem of cultural memory and continuity —chicken as sustenance, but also as a part of ritual and reciprocity, recalling the family voodoo ceremonies of his youth. Grasping this rooster under the imperative "Don’t Take This Too," the piece is a mournful, protective cry against all that has been taken from Cameroon, all that has been forgotten. Like other key Nkoth paintings, the work also posits a deeper sense of hope and possibility emanating from cultural memory. To understand where we go from here, we have to understand how we arrived.
Tweet
Share