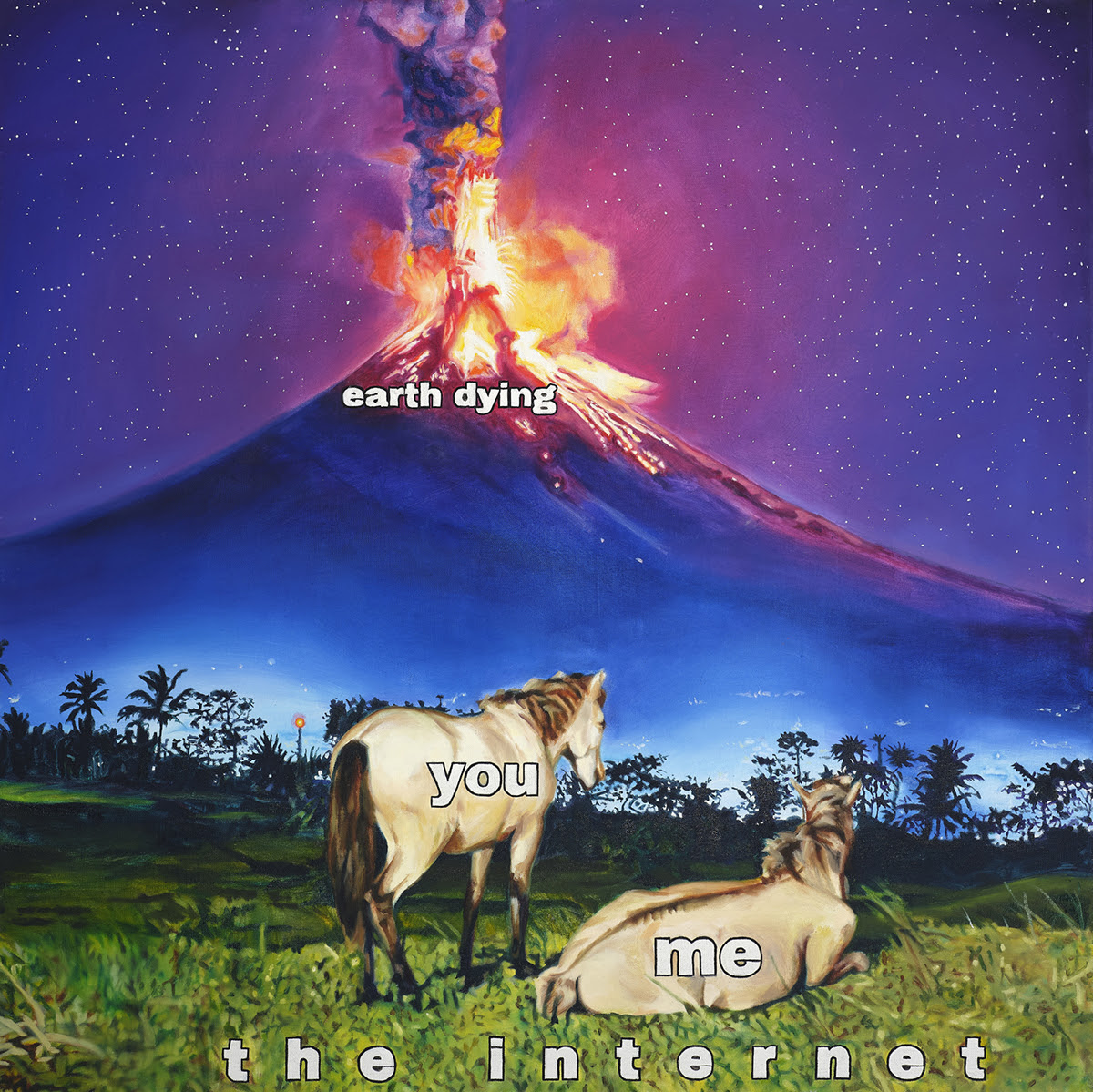 Night Gallery is pleased to present 'Screen Time,' an exhibition of new work by Luke Murphy and Christine Wang. Both artists address the screen as a digital intermediary for experience. Though its trajectory began long ago, the screen's total encroachment upon daily life reached new heights in 2020, becoming the primary tool of community engagement, creative exploration, and consumer activity in response to long-term shelter-in-place restrictions. Murphy and Wang consider the omnipresence of the screen without dogma, addressing its cultural and perceptual implications with a sense of humor and an appreciation of unexpected beauty.

Christine Wang, a San Francisco-based artist, paints memes "organically" found on the Internet in exacting detail, speaking to the ephemeral nature of online content and the development of discourse through viral culture. While humorous, her works enshrine a history that might otherwise be lost, subverting these already irreverent materials by doing the unexpected – taking them seriously. A virtuoso painter, Wang recreates these images with stunning attention to light and color, subjecting them to rigorous semiotic scrutiny. Painted in Impressionist style, one can compare the nineteenth-century French movement’s reverence for the ephemeral with Wang’s work, which captures and enshrines cultural artifacts meant to be immediately discarded. Indeed, Wang is frequently drawn to images that reflect the fleeting shelf-life of viral culture, incorporating celebrities, catchphrases, and controversies of the hour.

Luke Murphy is a New York-based artist whose works centrally incorporate LED panels programmed by the artist himself. Draped around familiar objects and embedded into wooden boards, Murphy’s light panels defy the flatness and rigidity we intuitively expect from the screen, suggesting the newfound ease with which digital media has entered the everyday. Though his standing works take on the immediate presence of sculptures, Murphy’s work is equally indebted to painting, his digital panels presenting a reinvigorated approach to abstraction. Freed from the representational content we expect from our screens, his works highlight the pixel as a unit of perception in the digital terms of the 21st century. At the same time that Murphy’s work emphasizes possibility, his sculptures are frequently characterized by a sense of collapse, his light panels seemingly strewn across culturally charged objects including police barricades and discarded Christmas trees. As a whole, the works reflect ambivalence toward technology’s presence in domestic life, depicting hallucinatory beauty and quotidian chaos at once.

Presented in Spring 2021, 'Screen Time' brings together these two voices in a multifaceted contemplation of our present moment. In equal parts euphoric, critical, escapist, hilarious, and mournful, their work presents a kaleidoscopic approach to a moment of cultural inundation and mass uncertainty, finding value in the sheer play of perception and the long-standing role of art to illuminate through confusion.

Night Gallery is pleased to present 'Headlines,' an exhibition of recent drawings by Derek Boshier. This will be the artist's second exhibition with the gallery.

Boshier first rose to prominence while exhibiting in London at the height of the British Pop Art Movement in the early 1960’s. During this time the graphic profile of a head first appeared in his paintings, notably in “Man playing snooker and thinking of other things,” 1961. Originally inspired by Victorian phrenology diagrams, this painting depicts the internal monologue of the subject as iconography contained within a yellow head. Since then this image has reappeared throughout his storied career and has evolved a way of visually metabolizing the news of the day into the “Headline” drawings, featured prominently in this exhibition.

Boshier’s practice has taken many forms over the years: he has produced films, paintings, sculptures, album covers as well as theatrical sets, but drawing has remained central the entire time. Magazines and newspaper clippings are the primary source for his “Headline” drawings and the immediacy of the medium has allowed him to react to current events in real time. While the drawings exhibited here are all recent, they are the culmination of decades of dedication to drawing and conviction to understanding the world at large through lines on paper.

In addition to the ”Headline” drawings, this exhibition includes “Samuel Palmer’s Nightmare,” a sprawling dreamlike landscape. Named after the British Romantic painter, the work reimagines Palmer's famous pastoral landscapes in the wake of the Industrial Revolution. While the industrialization of Britain took place during Samuel Palmer’s lifetime, any traces of it are missing from his paintings. In Boshier’s drawing, menacing smokestacks puncture fields of intricate flowers and wildlife. By visualizing this moment’s duality, Boshier rejects the romantic and finds beauty in the grit of reality, a theme that has resonated in his work across the years.

Derek Boshier lives and works in Los Angeles. His work has been exhibited extensively in the United States and abroad including shows at Gazelli Art House, London, UK; The Walker Art Center, Minneapolis, MN; Kunstmuseum Wolfsburg, Germany; Tanya Leighton Gallery, Berlin, Germany; The National Portrait Gallery, London, UK and others. His work has been acquired by MoMA, New York, NY; The Menil, Houston, TX; The Tate Gallery of British Art and The British Museum in London; The Brooklyn Museum, New York; and The Centre Pompidou, Paris, among many other collections.
Tweet
Share