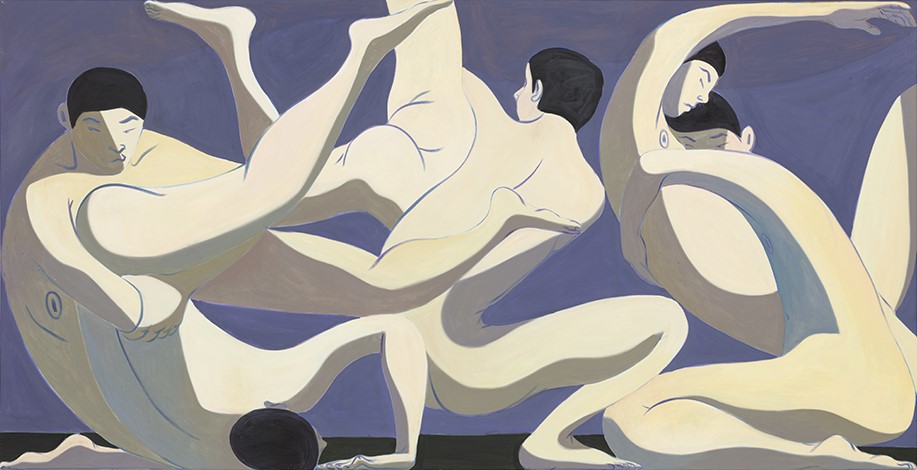 Steve Turner is pleased to present Body Double, a solo exhibition by Jersey City-based Mark Yang which features paintings that he created throughout 2020, some during his final months in Columbia’s MFA program prior to Covid and the rest after the shutdown. Yang’s painting practice is rooted in his desire to incorporate formal concerns relating to color, line and composition while addressing his identity as an immigrant, a Korean-American and a man. The earlier paintings depict two nude Asian men wrestling. Over the course of 2020, his palette blossomed with bolder color while his figures became more ambiguous–the specificity of racial identity receded. He added more figures to the compositions making his scenes a choreography of impossible body configurations rather than one arising from a specific wrestling maneuver. By the end of the year he zoomed in on the bodies to such an extent that the figures’ heads were outside the picture frame. In depicting nude male bodies in close proximity–wrestling, grappling and contorting–Yang aims to convey an aspect of male intimacy that is more common in Korean culture than in American culture. In doing so, he connects his work to art historical forbearers–Greek vessels, Eakins, Muybridge, Bacon and Mapplethorpe. While there are many categories within identity-based contemporary art, the one irreducible category is the body. Despite differences of ethnicity, nationality, belief, gender and sexual orientation, everyone has a body. Starting with this basic understanding, Yang adds his vision of the male body to the history of art.

Steve Turner is pleased to present Like A Virgin, the American debut solo exhibition by Kazuhito Kawai which features new ceramic vessels. The title comes from Madonna’s hit song that came out in 1984, the year of Kawai’s birth. In 1984, things were good in Japan and remained so for a few more years. However, over the subsequent thirty years, the situation has steadily declined, so much so, that Kawai’s generation is known in Japan as the “lost generation.” It has lived through a steady downward trend where hope was uncommon and drugs and alcohol were abundant. Bad as the situation has been, pop culture served to cover up the despair. These are the essential elements of Kawai’s work–despair represented by the chaos, irregularity, collapse and fragility of random shapes and the accompanying masking of that despair with bright and lustrous colors. A final ingredient are his titles which come from songs, movies and novels that are meaningful to him. With Covid the problems in Japan have come out into the open. Depression, discrimination, anger, helplessness and loneliness are now plain to see. To find meaning, Kawai turned inward. Using clay, he has built grotesque castles from despair, coloring them with fantasy and sealing them with fire.

Born in 1984 in Ibaraki, Japan, Kawai earned a BA in Fine Art at Chelsea College of Art, London (2007) before returning to Japan where he earned a BA at the Ibaraki Prefectural College of Ceramics (2018). His work has been exhibited at Mitsukoshi Contemporary Art Gallery, Tokyo (2020); SHOP Taka Ishii Gallery, Hong Kong (2019); t.gallery, Tokyo (2019) and House in Kasama, Ibaraki, Japan (2017). It also has also been presented by Taka Ishii Gallery at Frieze, Los Angeles (2020) and Art Basel, Miami Beach (2019). He lives and works in Ibaraki Prefecture, Japan.

Steve Turner is pleased to present Best In Show, a solo exhibition by Lisbon-based Ricardo Passaporte consisting of six new paintings that depict close-up portraits of recent Westminster Kennel Dog Show winners. While these spray-painted portraits of Rumor, Flynn, King, Babar, Miss P and CJ share a uniform blue background, each dog is a specific, identifiable breed, a “brand” vying for popularity, “likes” and market share. The dogs, however, lack the usual “cute” characteristics associated with breeds and dog portraits— instead, Passaporte has replaced the cliche with a neutral, abstract quality, one that liberates both the dog and the viewer from the suffocating effects of marketing, advertising and consumerism.