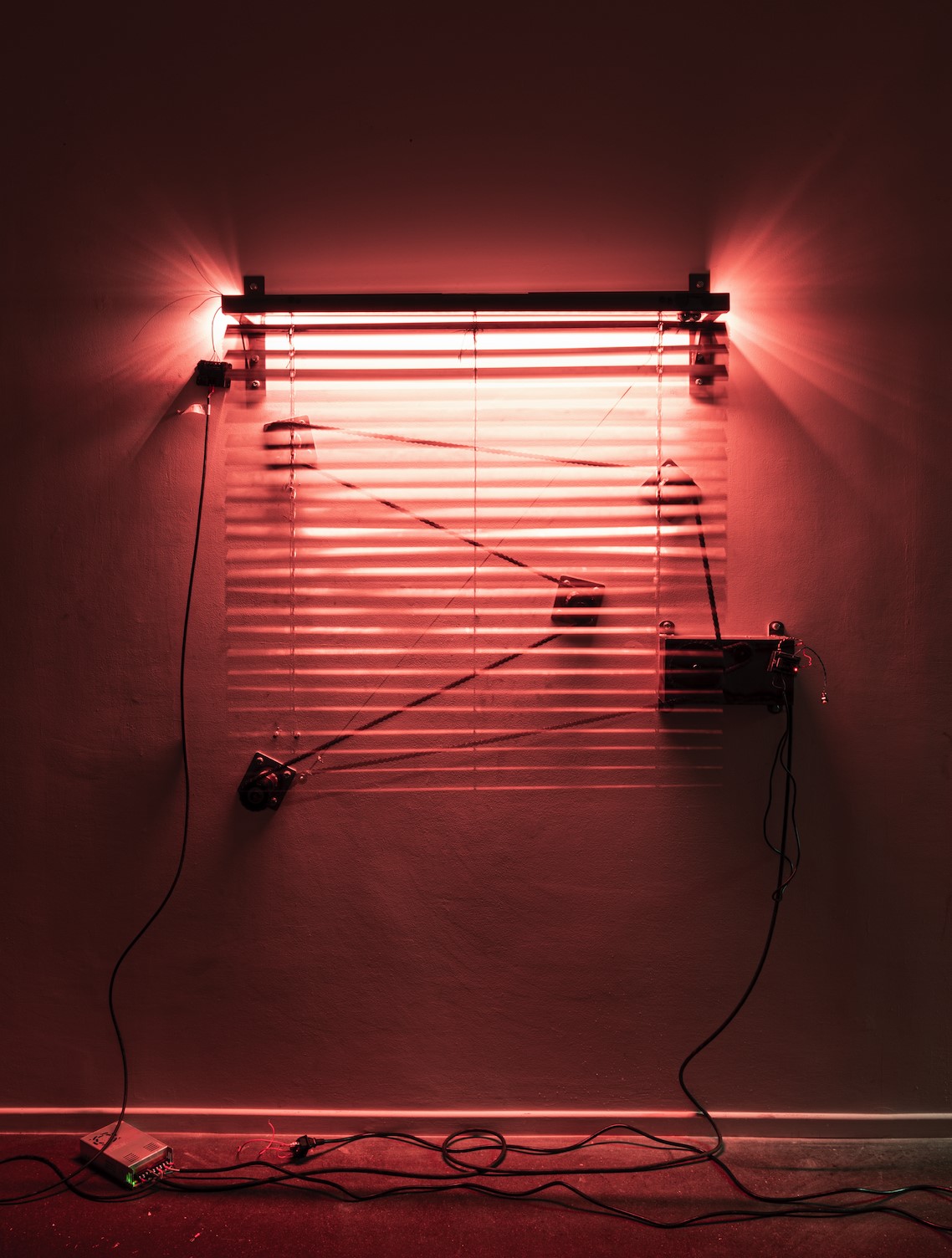 “It always starts with the things we tend to do everyday and don’t think about, I like to take those and make them very difficult and repetitive—think Rube Goldberg, or Doc Brown’s ice machine from Back II The Future. Ultimately, this is just a Venetian blind, but every part of it has become an arduous action.” — Stephen Neidich, L.A. On Fire catalogue

Two years ago, at the end of the summer, Stephen Neidich set about creating a new kinetic sculpture, "Wake Me Up When It’s Over" for the L.A. On Fire group show at Wilding Cran Gallery. The piece was constructed from a fully fabricated Venetian blind, rendered in steel with exposed motor sprockets, roller chain, and backlit by a fiery red light. “With my work in general, it’s very rarely narrative, if ever, so when I started thinking about the concept behind this show I thought about this visual idea of a fire,” says Neidich. “Without the light you only see the movement, but with the light you get this eerie flicker, the shape and projections of fire masked by these sharp, simple movements that are a result of the shapes and shadows of the blind. The kinetics of the sculpture become the fire. But it’s not fire, it’s this hollow idea of a fire.”

When Neidich began thinking about 'five more minutes please,' his second solo show with Wilding Cran—his 2019 debut with the gallery, 'Making the rounds (a place to wait),' which featured a single kinetic installation fit with over a dozen steel chains affixed to 14 camshafts that monotonously smashed the chains against rubble sourced from construction sites around the artist’s Frogtown studio—he wanted to reexamine the movement of kinetic blinds, this time using the chain as a more painterly line within the works.

“I started thinking about blinds in relation to each other in the space, with a cleaner more intentional movement and with more ambient lighting,” says Neidich. “I think about various hues of light as a mood for each piece, which range somewhere between an explosion and a sunset. It all depends on the day.”

To achieve this, Neidich backlit the sculptures with LEDs in shifting gradients to articulate the personalities of each chain movement. This anthropomorphic gesture acts as an extension of a frustrated human hand attempting to operate this finicky object as it actually gets stuck, and unstuck, in position.

“Ultimately these are machines, and the integrity comes not from their obsolescence, but from the grace of their intended performance,” says Neidich. “I started to think about the movement of this often dysfunctional object and how best to enhance it to the point of being performative.” As a result, the gallery will be lit only from the glow of each work and visitors to the space will activate the dozen works in the exhibition (each varying in blind orientation and size, from 24 x 24 inches to 9 x 16 feet) by tripping a motion sensor upon entry that will set off a subtle symphony that places each visitor inside a surround sound panopticon, a voyeuristic platform with a vantage upon a series of abstract horizons.

“My work is about working in the studio and how the studio influences the work. So often it consists of these hulking motorized objects, and that’s part of the trip, but there’s something confusingly meditative that happens as you sit with these machines and allow them to hypnotize you,” says Neidich. “Despite what you might think, it’s shockingly quiet inside the space. What I want to give people is a peaceful symphony.”

ABOUT STEPHEN NEIDICH Stephen Neidich’s kinetic sculptures are made of industrial metal objects and tools found in the studio and the outside world. They leverage our familiarity of everyday objects against experience and performance of making art. These gestural spinning and rotating sculptures make plain how, and from what materials they are made, the acrobatics of their production. Stephen Neidich was born in New York City and currently lives and works in Los Angeles. His work spans installation, sculpture. He received a BA from Brown University and an MFA from CalArts. Neidich most recently had a solo exhibition at Wilding Cran Gallery, Los Angeles; his work has also been exhibited at Night Gallery, The Underground Museum, Nicodim Gallery Los Angeles, Hilde, Chimento Contemporary, Anat Ebgi and LA><ART in Los Angeles, Kunsthalle Vienna, Kunsthalle Galapagos, Berlin and at 211 Elizabeth Street in New York City, amongst others. His work has been featured in Art Forum, CARLA, Artillery Magazine, Smithsonian Magazine, and Wallpaper Magazine.
Tweet
Share