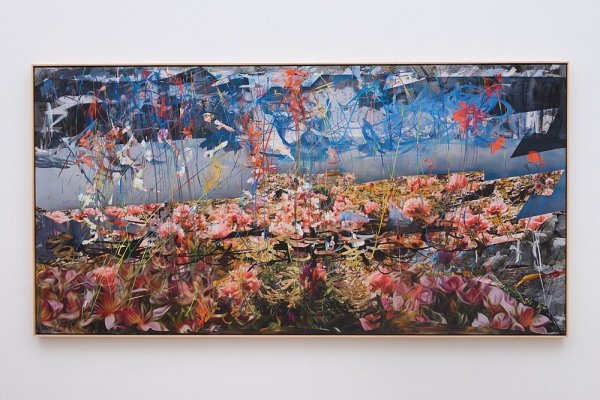 1301PE
6150 Wilshire Blvd., Los Angeles, CA 90048
Feb 13, 11 AM - 1 PM — ends Feb 27, 2021
In order to maintain survival, some species hatch all at once. Floods of nascent turtles, crabs, or fish will overwhelm their predator by sheer volume. This oversaturation ensures that the breed will live on. For Predator Swamping, Petra Cortright exhibits a new body of work, made during the precarious months of 2020, in which she exercises a similar survival instinct.

For her third exhibition with the gallery and her first since the birth of her son, Cortright continues to create paintings in Photoshop and prints them on Belgian linen. The paintings incorporate images of the High Desert, Bolivia, and Patagonia sourced from the internet which function as a base layer upon which she builds expanded landscapes. For the first time in her career, Cortright has also created paintings in black and white. The stripping away of color reveals an overwhelming desolation that could bear a strong resemblance to 2020, while for some including Cortright, a homebody at heart, the imagery evokes doomsday bliss.