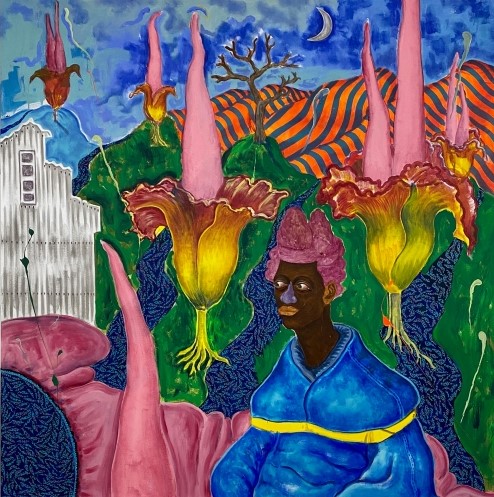 Simphiwe Ndzube: Like the Snake that Fed the Chameleon

Nicodim Gallery
1700 S Santa Fe Avenue, #160, Los Angeles 90021
Feb 13, 12 PM - 5 PM — ends Mar 20, 2021
My skin is tightening
soon I shall shed it
like a monitor lizard
like remembered comfort
at the new moon rising
I will eat the last signs of my weakness
remove the scars of old childhood wars
and dare to enter the forest whistling
like a snake that had fed the chameleon
for changes
I shall be forever.
— excepted from Audre Lorde, “Solstice,” 1978

With 'Like the Snake that Fed the Chameleon,' Simphiwe Ndzube continues to develop and expand his cosmology, reimagining Black bodies as mythical and fantastic beings capable of inhabiting multiple dimensions. His figures fly, flail, fall, and dance their way from sculpture, to sound, to canvas through multiple environments, highlighting the fluidity and permeability of identity itself. Like the snake, his characters can be cold-blooded and stealthy; like the chameleon, they are capable of change.

Whereas the bodies in Ndzube’s earlier works are often faceless or headless, this series includes detailed portraits of a number of the individual characters and further develops their unique personalities. In prior exhibitions, Ndzube’s figures reckoned with drought and desolate environments, but the landscapes in 'Like the Snake that Fed the Chameleon' have grown fertile and sensual along with the humanoids that populate them. Where once the earth was dry and barren, it has now been sown and is ready for harvest. Within the paintings, pink flowers rise to the sky and spread their fleshy petal-tongues to the sunlight, begging to be kissed. Around them, a sculptural cornfield grows throughout the exhibition. A seven-foot dandy traipses throughout the proceedings, peacocking his vibrant couture to anyone who will pay attention. A Bacon-esque figure in a Garden of Earthly Delights, perhaps he is trying to draw the eyes of the couple making love in the sunlight on a canvas nearby.

At the belly of the snake lies the artist’s surrealist adaptation of a domestic shack, based on those of the townships surrounding Cape Town, South Africa, where Ndzube was born and raised. A twenty-minute sound piece Ndzube composed and recorded with Thabo K. Makgolo and Zimbini Makwethu emanates from within the large, suspended structure, filling the surrounding spaces with haunting music. It incorporates acoustic elements that evoke sorcery, witch-hunting, and creatures that fly by night. In Ndzube’s world, a darkness is always lurking, but on-notice that it will eventually be evicted by the light.