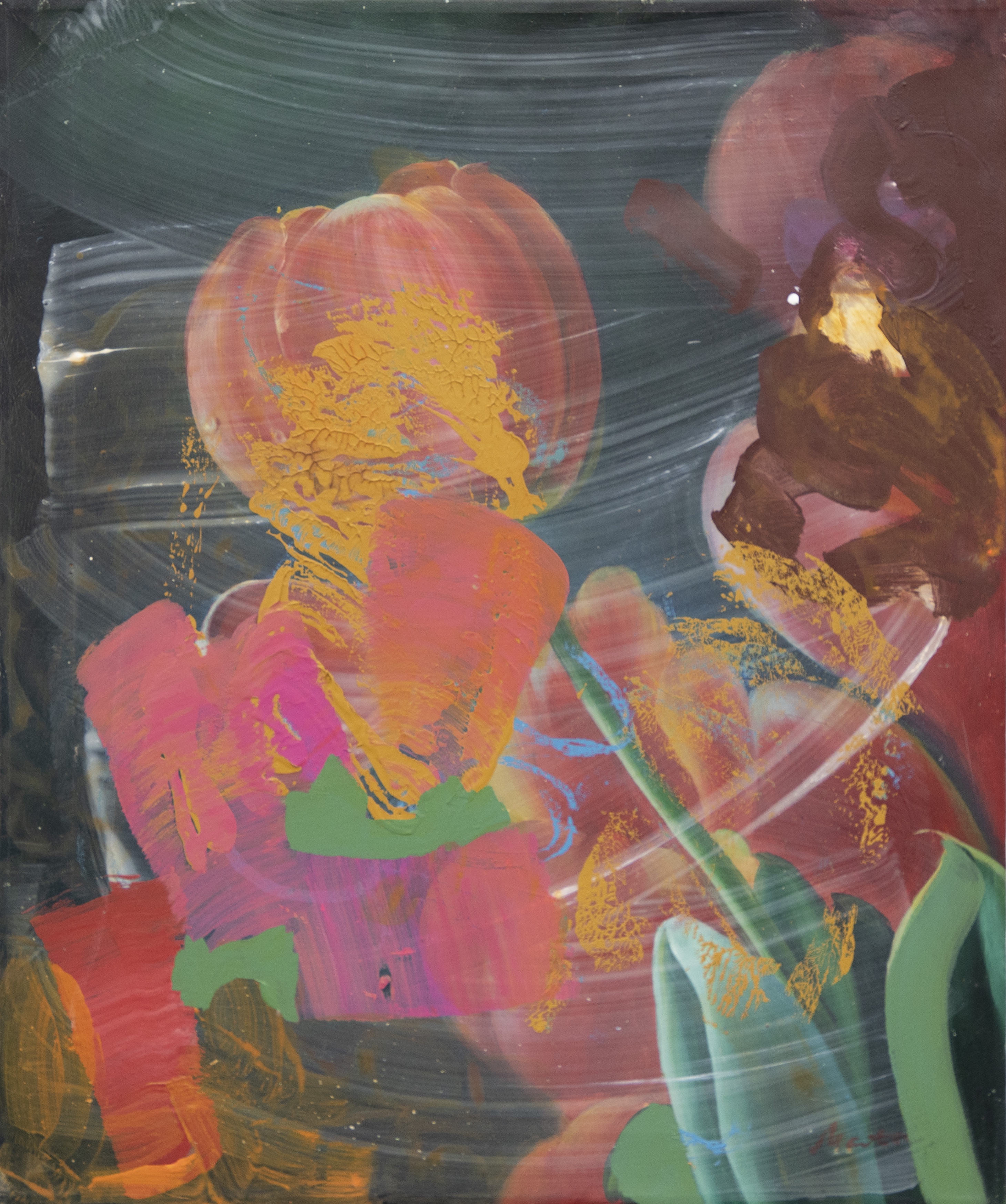 In his first solo exhibition with AERO SALON, Oklahoma City based artist Paul Waddell sets out a Borgesian array of seemingly disparate and unrelated images. There is a father changing his infant son's diaper in Waddell's studio. We see the huge face of a man with an eye patch and a wide-eyed parasitic thing on or near him. There are clusters of several earthlike planets arranged curiously close to each other in space. There are unidentified billionaires and various types of flora. There are dinosaurs, fragments of wondrous landscapes, hypertensive triangles. And there is a massive vertiginous interior that feels like an antechamber to the afterlife. Yet for all the heterogeneity of subjects, a feeling of narrative relatedness connects the paintings; a sense that billionaires are more related to dinosaurs than we would imagine, that a strange high climbing potted plant and planetary formations communicate with each other, intimately, directly, but also with and through landscapes, babies and their diaper changing fathers, through pulsing triangles and at all the terrifying and exhilarating frontiers of human being. And that what we see in Paul Waddell's paintings is what they are saying. And that by looking at them and contemplating them we become and are their translative, communicative mechanism at work.

Paul Waddell (b. 1983 Cottonwood AZ) currently resides in Oklahoma City. He received a BA from The School of the Museum of Fine Arts in Boston, MA in 2005. His work has been exhibited with galleries such as The Philbrook Museum, The Gilcrease Museum, Night Gallery, Honor Fraser Gallery, and Human Resources to name a few. Paul’s work has been written about in LA Weekly, ArtSlant, Time Out Boston, and Art papers, among others.

In BEAT-A-RETREAT Paul Waddell gives us many things to look at and to contemplate. A survey of types of things and their types prompts us to look deep into our past and our present by way of a singular visual poetics. Waddell describes his process this way:

Varnish is a way to make a lens out of goo, that light can travel through and make colors glow. Oil paint is good for describing decadent meaty flesh. The common graphite pencil captures and describes the incomprehensible scale of planets in space while bringing to human imaginative scale the doodle in a school notebook during class or lecture. Tearing huge watercolor paintings within the framework of performance art can provide a mark making tool in multidisciplinary practice, emulating tangents and arcs of energies and actions and enacting in personal and social theatre the surprising confluence of all things in the known and unknown universe.

The feeling of a connected communicative energy described here is enhanced by the provisional approach Waddell applies to painting. His is a process of thinking in paint; study, rumination and discovery through the practice of painting. It is rigorous, yet fluid. By way of and through the very invention of recipes of paint - testing viscosity, saturation, texture, color and transparency in the constant development of new material, and technical innovations of paint application with a keen eye on material and technical innovations in painting throughout history, along with the various subject matter and treatment of that matter, conventionally and inclusive of the breakthroughs beyond those conventions and an extrapolative and restless impulse to understand and realize the future of all of these creative and painterly developments, Waddell enacts processes of natural, human and non-humano-centric change and evolution. Painting becomes a microcosmic engagement with pre- and proto-historic development