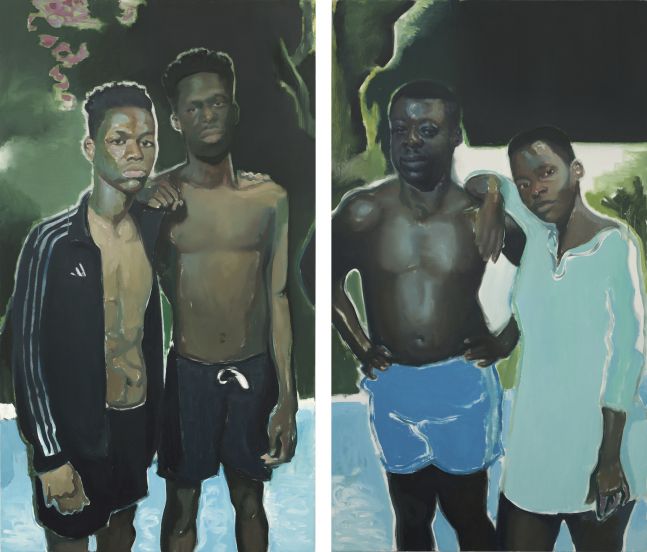 Nino Mier Gallery is pleased to announce its first solo exhibition with UK-based painter, Jonathan Wateridge. The exhibition, titled Inland Water, will be on view in Los Angeles from February 16th to March 20th, 2021.

Inland Water presents a series of Wateridge’s recent paintings through which the Zambian-born artist provides a glimpse into private and intimate scenes of poolside affluence visually echoing Wateridge’s memories of his suburban upbringing during an era of immense racial and economic inequality in his birth country. While tied to the artist’s own history, the imagery escapes the limits of personal narrative and geographic location as Wateridge’s cinematic compositions establish a familiar and uncanny atmosphere permeating the façade of comfortable leisure. These painted depictions of exclusionary settings, and the socioeconomic disparity they inevitably suggest, are still equally present decades later in cities all over the world, including Los Angeles, where manmade boundaries such as walls and gates reinforce societal divisions by separating communities of wealth and privilege from members of society who lack the same resources as a result of systemic conditions.

Often confronting the viewer with a direct outward gaze, Wateridge’s figures appear disconnected from their serene, seemingly quotidian, spaces as if being confronted by an intrusion into their insular environments, while, in some cases, being further separated from their immediate surroundings by the painterly contours delineating their own form. While each scene contains underpinnings of realism, the tenuous relationship between the subjects and their contrived private spheres points to the highly constructed nature of their existence. In each painting, Wateridge references staged scenes acted out by hired models on full-scale sets fabricated in his studio. The methodically produced foundations of each painting expand on Wateridge’s role as a painter as his practice navigates aspects of both filmmaking and photography while allowing his painted narratives to realign with collectively understood aesthetics manufactured by visual media. Since 2019, Wateridge’s paintings demonstrate an increasing separation from reality with a decided shift in style from the artist’s earlier more realistic renderings. The scenes presented in Inland Water exhibit a coalescence of gestural brushstrokes, knife marks, and vivid colors that allow narratives rooted in memory to take on broader associations untethered from the specificity of their source.

Jonathan Wateridge (b. 1972 in Lusaka, Zambia; lives and works in Norfolk, UK) has shown in solo exhibitions at TJ Boulting, London; Galerie Michael Haas, Berlin and Zurich; and Pace Gallery in association with HENI, London. His works have also been included in group exhibitions at Musee de Beaux Arts, Rouen, France; Centre of Contemporary Art, Torun, Poland; Weserburg Museum of Modern Art, Bremen, Germany; and House of Arts, Ostrava, Czech Republic. Wateridge’s paintings are in the collections of the Pinault Foundation, Venice; Didier Casimiro, Kiev; the Rennie Museum, Vancouver; as well as the Saatchi Collection, Simmons & Simmons, and the Zabludowicz Collection, London.