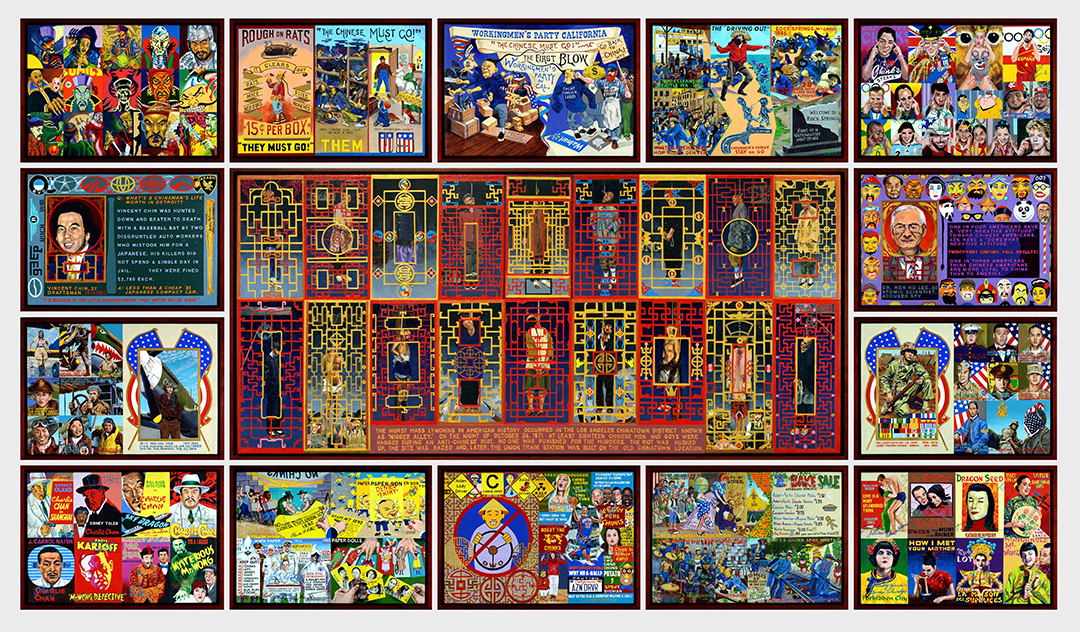 With acrylic paint on canvas, Sakoguchi reassembles imagery from film posters, newspapers, comics, and internet searches to reveal subtexts of local discrimination, mass media exploitation, and state-sanctioned violence. A Japanese American who spent years of his childhood living in an internment camp during World War II, Sakoguchi comments on a century and a half of prejudice against diasporic Asians. Contending with overlapping histories that contribute to ideas of Asian American identity, Sakoguchi creates an ironic primer on capitalism’s treachery with an audacity that challenges and uplifts.

At the center of the exhibition, a large painting of 15 framed panels, entitled Chinatown (2014), illuminates a dark page from LA’s past; the Chinese Massacre of 1871 took place near Alameda and Los Angeles Streets, then known as Calle de Los Negros. After the Central Pacific Railroad was completed in 1869, animosity directed at the Chinese labor force got uglier. In 1871, when a police officer was killed intervening in a local feud, a mob of 500 rioters unleashed themselves onto the Chinese community. Between 18 and 20 were lynched that night. Only ten of the vigilantes stood trial. The charges were overturned on a technicality, and the defendants were never retried.

Sakoguchi’s sardonic commemorative plaque, exhibited in Los Angeles’ Chinatown one hundred and fifty years later, contrasts with the textbooks that consign the event to a sidebar or a footnote. Depicting hanging bodies in full color, Sakoguchi acquaints us with each victim by particularizing the clothing with great care. The figures are partially shielded from view by an overlaying red and gold pattern based on decorative screens, inviting a reexamination of Chinatown’s architectural signifiers. In the 1930s, Chinese residents were forced to relocate to the New Chinatown, redesigned as a theatrical simulacrum for tourists. Old Chinatown, with its vibrant culture and painful past, was then covered over by railways.

In the surrounding panels, Sakoguchi conveys how negative stereotypes of Asians have proliferated in America, from the era of westward expansion to present day. Freely introducing his own twists, he uses vintage editorial cartoons and other ephemera to shift the narrative and make up for lost accounts. One painting juxtaposes propaganda against Asian railroad workers with politically-charged critiques of affirmative action today. In another, Sakoguchi paints a portrait of Dr. Wen Ho Lee, a nuclear physicist imprisoned for spying, surrounded by traditional and non-traditional masks, a reminder of how Asian Americans are perceived as “perpetual foreigners.” In the dynamic border, two panels pay homage to the Chinese men and women who served in America’s military. Other works whimsically collage pulp media, from comic book villains to exotic Asian divas of the screen, often played by white women.

Confronted with the current rise of anti-Asian crimes and other manifestations of systemic racism, Sakoguchi’s backward glance reveals how former president Trump’s use of racist rhetoric and memes for political gain is nothing new. In an unsettling postscript to the 1871 massacre, one panel in Chinatown (2014) invokes the brutal 1982 murder of 27-year-old Vincent Chin, beaten to death by two white autoworkers in Detroit. Again, the perpetrators did no jail time and were each fined only $3780. As the panel denotes: less than the price of a cheap car. By painting a bold banner of what has gone wrong in America, Sakoguchi calls for change.

Visit belami.info/exhibitions/resources/ for a list of resources and ways to support Asian American communities.

This exhibition also samples works from the Orange Crate Labels series, begun in the mid-1970s and reprised in the mid-1990s. These 10×11-inch panels borrow their format from illustrations on wooden crates that Sakoguchi regularly observed in his family’s San Bernardino Valley grocery store. The bright paintings repackage objects of satire in the language of fresh produce, providing dark commentary on the bounty of the Golden State. In a more recent spin, the US government’s chaotic management of the quarantine offers ample material for Sakoguchi’s satiric sensibility.

A publication with essays by Eli Diner (Critic, Curator, and Executive Editor of Cultured magazine), Steven Wong (Curator and the Director of the Vincent Price Art Museum, Monterey Park, CA), and Ana Iwataki (Writer, Curator, and PhD student in Comparative Studies in Literature and Culture, University of Southern California, Los Angeles) will be released in PDF and printed form during the course of this exhibition.

Ben Sakoguchi (b. 1938, San Bernardino, CA) lives and works in Pasadena. During World War II, Sakoguchi and his family were interned at a camp in Poston, Arizona. After the war, the Sakoguchis returned to Southern California and reopened their modest grocery store. He received his BFA and MFA from UCLA and taught at the Art Department at Pasadena City College until his retirement in 1997. He has exhibited solo projects at Ortuzar Projects, New York (2020), POTTS, Alhambra (2018), The Skirball Center, Los Angeles (2016), The Alternative Museum, New York (1992), and San Francisco Fine Arts Museum, San Francisco (1980). His work has been featured in institutional surveys and group exhibitions including L.A. RAW: Abject Expressionism in Los Angeles, 1945–1980, Pasadena Museum of California Art, Pasadena (2012), Sub-Pop, Cardwell Jimmerson Contemporary Art, Los Angeles (2011), Made in California: Art, Image, and Identity, 1900-2000, Los Angeles County Museum of Art, Los Angeles (2000), and The Decade Show: Frameworks of Identity in the 1980s, The New Museum, The Museum of Contemporary Hispanic Art, and The Studio Museum, New York (1990). He was twice awarded fellowships by the National Endowment for the Arts.
Tweet
Share