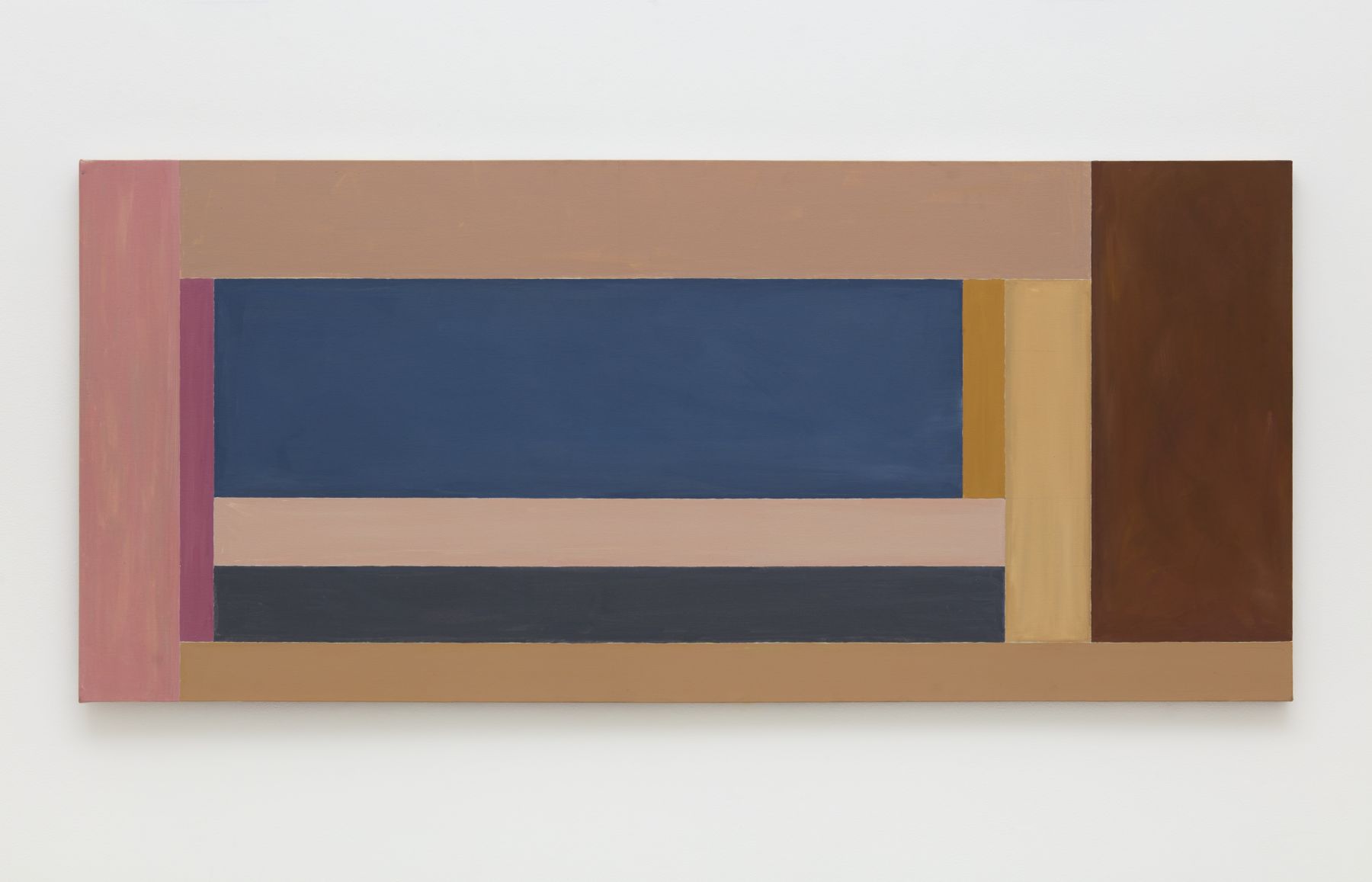 Kayne Griffin is pleased to present a solo exhibition of work by Mary Obering, her second with the gallery.

This exhibition is a survey of work by Obering from the early 1970s through the 2010s. The paintings on view highlight the developments in her painting practice – including material, inspiration and technique – that occurred over forty years. Central to all is Obering’s commitment to geometric abstraction while exploring the essence of color.

The four earliest works in the exhibition are from the 1970s and illustrate the transitions Obering made from paintings on canvas to her first paintings with egg tempera on panel. In the paintings on canvas, she explored color and space by layering geometric fields of color; in the case of Colorful Spring Rain (1973) cutting canvas and laying one piece on top of the other in vertical columns. This idea of layering and creating relationships within the abstract space can also be seen in For Morandi (1978) in which the start and finish of each brushstroke of the translucent egg tempera application is clearly delineated and creates its own rhythm along with the blocks of color themselves. The arch-shaped panels of the diptych Outside and Inside (1975), some of the last paintings done in oil, evoke windows through which a horizon line is seen. In fact, for Obering, the conceptual pull toward representation (referenced in the titles of many of her works) offered her a structured way to approach abstraction while also acknowledging its influence. Speaking of this, Obering has said, “My earlier work, while non-representational, referred to landscape. I made several series of paintings but slowly they became more and more referential. To try to become abstract again, I broke their components down to a horizon line and the horizontals, verticals, and diagonals that we see when we look at scenery.”

Continuing her color and spatial experimentation, a shift in her technique occurred in the mid-1970s. Obering moved away from working on canvas and began to employ the Old Master process of egg tempera, gold leaf on gessoed panel, inspired by her time spent in Italy. Additionally, the technical aspect of painting with these materials appealed to Obering’s interest in scientific engagement, and she has subsequently employed these materials to explore scientific concepts - such as particle physics – and natural phenomena; a nod to her studies in the late 1950s. In Cricket from 1979 and Luna D’Autunno from 1992, horizontal and vertical blocks of gold leaf and tempera highlight Obering’s interest in scale and color relationships. In Blocked from 1990, Obering breaks down her techniques into their components with each panel of color an individual material - egg tempera, copper leaf, gilding clay, graphite, gesso, panel. Through exposing materials which usually remain under the painted surface, Blocked both reveals and incorporates the process of painting into the final composition. This idea of layering, of creating space with minimal two-dimensional relationships, can be seen throughout all the paintings in the exhibition.

Mary Obering was born in 1937 in Shreveport, Louisiana. She received a BA in Experimental Psychology at Hollins College and her MA in Behavioral Science studying under B.F. Skinner at Harvard. Soon after graduating from the MFA program at the University of Denver in 1971 she moved to SoHo in New York City. Carl Andre curated an exhibition of her work at Artist’s space in 1973, and her work was included in the 1975 Whitney Biennial. Obering’s works have also been included in exhibitions at the Museum of Fine Arts, Boston; CAB Art Foundation, Brussels; Crystal Bridges Museum of America Art, Bentonville, AR; Wadsworth Atheneum Museum of Art, Hartford, CT; Denver Art Museum and Nelson-Atkins Museum of Art, Kansas City, MO among others. Her works are in the permanent collections of institutions such as the Whitney Museum of American Art, The Aldrich Contemporary Art Museum, The Detroit Institute of Art, Museum of Fine Arts, Boston; and the Wadsworth Atheneum Museum of Art, Hartford, CT.

Birch was first recognized for his own papier maché sculptures that depicted African American men, women, and children engaged in common activities and rituals. In the late 1980's Birch returned to New Orleans from New York City where he was living, to attend the World Fair and visited the iconic Saint Louis Cathedral Catholic church. While there, he came upon a classical figurative sculpture from 15th century Spain depicting a crucifixion created in papier maché. This experience was monumental for Birch. It was the catalyst for connecting metaphorical and symbolic interpretation in his artistic practice. It opened up the ideas of how "art" is conveyed in terms of its fragility, preciousness, the value in our society, and the art world.

Since the papier maché series, all the works Birch has created are an extension of his living experiences. Each series is an accumulation that speaks to the human conditions he chronicles in daily occurrences. Birch’s recent works privilege the everyday object. He records the anti-moments: coiled hoses, wildflowers, tennis shoes, a cat on a porch, all situated in the historically Black and working-class neighborhoods. Birch's works are narrative, autobiographical, and a document of his encounters.

Beginning in 2000, Birch removed all color from his palette working only in black and white. These graphic paintings made from acrylic and charcoal stem from the artist’s observations of the people and landscape of New Orleans and Louisiana. Birch uses a distinct layering of transparencies and mark making that is meant to act as a metaphor for human connection. Each layer holds a deeper meaning that when peeled away reveals the universal meaning of connectiveness. These works are no more representational than abstract. They are reflections of Birch’s feelings on the meaning of humanity.

Willie Birch was born in New Orleans, Louisiana in 1942 where he currently lives and works. He received his MFA from the Maryland Institute College of the Art. Birch has been the recipient of many awards and fellowships, including the Guggenheim Foundation, the Pollock Krasner Foundation, the Joan Mitchell Foundation, the New York State Council on the Arts, and the National Endowment for the Arts. He was named the USA James Baldwin Fellow in 2014. Birch’s work has been included in numerous group exhibitions throughout the country and a survey of his work, Celebrating Freedom: The Art of Willie Birch, was organized by the Contemporary Art Center, New Orleans, in 2016 and travelled nationally. Birch will be included in the upcoming Prospect 5 New Orleans: Yesterday we tomorrow curated by Naima Keith and Diana Nawi.