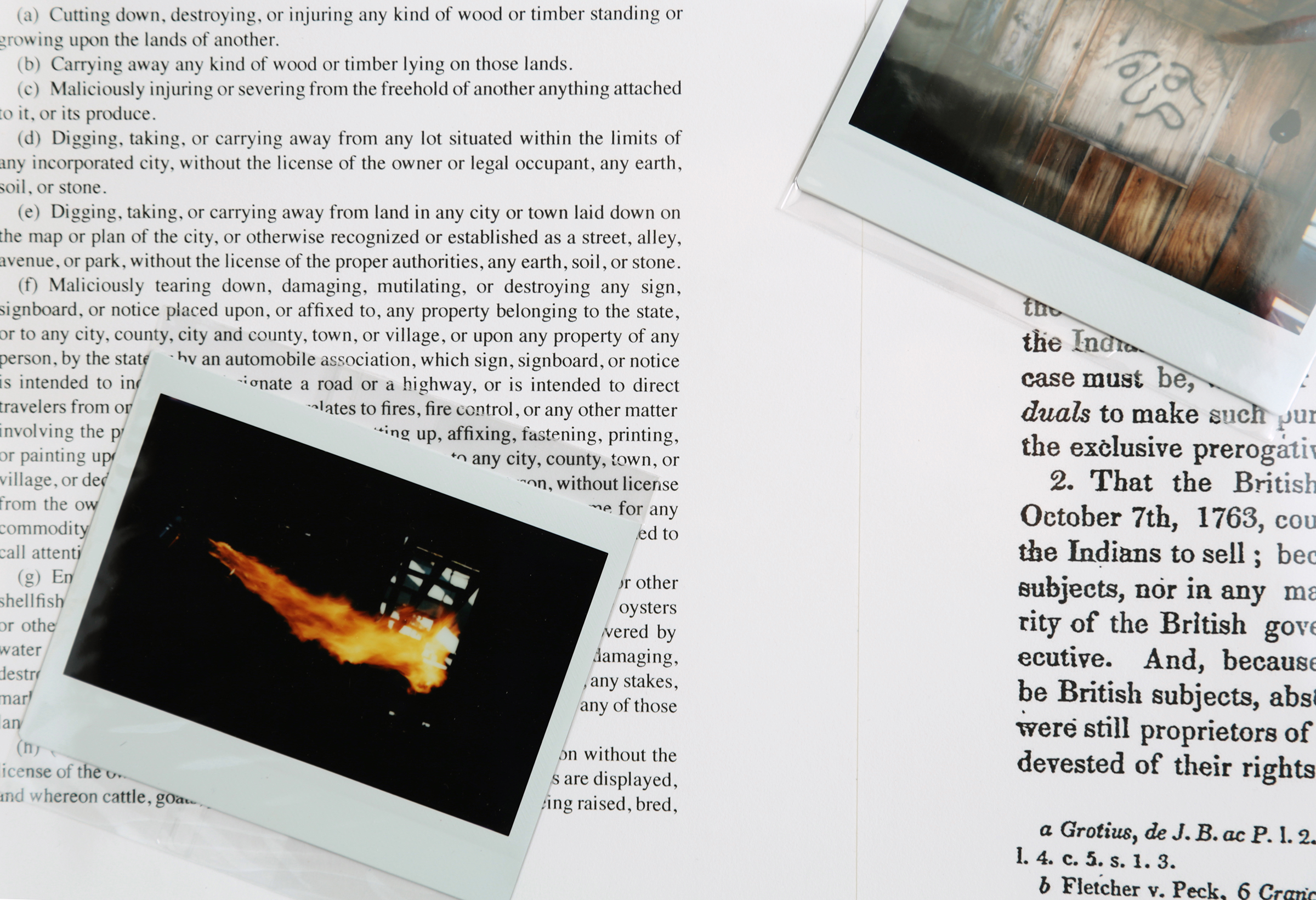 Hunter Shaw Fine Art
5513 Pico Blvd. Los Angeles Ca 90019
Mar 19, 11 AM - 6 PM — ends May 02, 2021
Hunter Shaw Fine Art is pleased to announce a solo exhibition by Los Angeles based artist Tarik Garrett. Across a range of media including sculpture, sound, and collage, Garrett’s work excavates the history of America’s deepest wounds, uncovering resonances between the past and future state of the Union. Through a process of research, appropriation and recontextualization, Garrett investigates notions of ownership, authorship, labor and value within the historical framework of racial inequity in the United States. Many works are assembled from objects that have been acquired as resale, abandoned, seized or appropriated property. What these items have in common is that they are encountered in a state of decay on two levels: their materiality and original monetary value. These degraded commodities are repurposed as sculptural materials and subject to further manipulation in the artist’s studio or combined as readymades. Chain Link fences and discarded sweatshirts are distorted in a manner that appears to be an eerie effect of natural decay but is in fact the result of the artist’s labor and intervention. Elsewhere, salvaged metal is etched with appropriated images and texts: Southern state flags which visually perpetuate the Confederate legacy, alongside declassified documents from the F.B.I.’s COINTELPRO operations aimed at surveilling, infiltrating, discrediting, and disrupting organizations like the Black Panthers and SNCC. Together these works comprise an incisive history of propertized human life, from chattel slavery to modern tresspassing laws.

Throughout the exhibition the artist calls attention to sites of delineation between inclusion and exclusion. Frames, fences, laws and architecture are alike in determining what is physically and conceptually allowed “in” and what is kept “out.” Challenging these distinctions, Garrett’s work exposes a racialized attitude toward ownership that permeates our culture at every level. In an ongoing collaboration with Kevin O’Neill, texts are collated from extensive research into the idea of property and the laws that surround it. A key reference in this series is the essay “Whiteness as Property” (1993) by critical race theorist Cheryl Harris which posits that whiteness entails the same qualities, privileges, protections, rights of exclusion and value as our concept of property. Harris argues that the formation of racialized identity was done in the name of white supremacy and allowed for a system and ideology not only to seize and appropriate black labor, but to create a “form of property contingent on race - only Blacks were enslaved and treated as property, [and] the conquest, removal and extermination of Native American life and culture were ratified by conferring and acknowledging the property rights of whites in Native land.” In "Untitled" (2020 / 2021), Garret and O’Neill juxtapose excerpts from “Whiteness as Property” alongside documents from foundational cases of American property law and transcribed depositions. These texts are overlaid with polaroids documenting Garrett’s performative interventions among casualties of capitalist ideology .

In a pair of recent sound works, Garrett adapts two historical sources which together depict the fallacy of the American Dream and how it has been used to manipulate disenfranchised groups since the founding of this country. In one work the artist reads a speech originally delivered by Andrew Johnson in October of 1864 to a black audience announcing emancipation in Tennessee. A slave owner and outspoken racist, Johnson orates in language that is charged with emotion but totally devoid of sincerity - an obvious and disingenuous attempt to secure his position as Vice President in the election coming less than a month later. In this strange and disturbing speech, Johnson makes great effort to appear sympathetic and relatable, delivering promises and sentiments that are contradicted by his past and future actions - a hollow and performative allyship sadly still prevalent in politics today. A plaintive chorus made from the wailing tones of brass rebut the dry recitation while tracing sonic lineage from Albert Ayler and John Coltrane to the spirituals and work songs of enslaved Africans. This dirge responds to the rift between sorrow and jubilation that characterizes the history of black experience in the Americas.

This duality is further articulated in a sound work adapted from W.E.B. DuBois’ rewrite of “My Country Tis Of Thee.” Recognizing the patriotic song to be a white fantasy of revisionist history, DuBois adjusted the lyrics to reflect a more honest depiction, both painful and resilient. “Thy woods and templed hills / My heart with rapture thrills / Like that above” is reworked into “And o’er thy hate which chills / My heart with purpose thrills / To rise above.” While DuBois’ resolve still resonates today, so too does his critique of the settler colonial mentality evident in the original lyrics. DuBois famously described the “psychological wages” whiteness pays its own, amounting to an attitude of universal entitlement. Over the past decade we have seen whiteness pay out in familiar ways, from the occupation and appropriation of indigenous land to the ways in which Central American refugees are refused their legal protections. Non-white life is still subject to disproportionate commodification and juridical violence under a racialized ethos of ownership that has been enforced over centuries. Acknowledging these truths about the world can affect change by generating emancipatory aspirations.
Tweet
Share