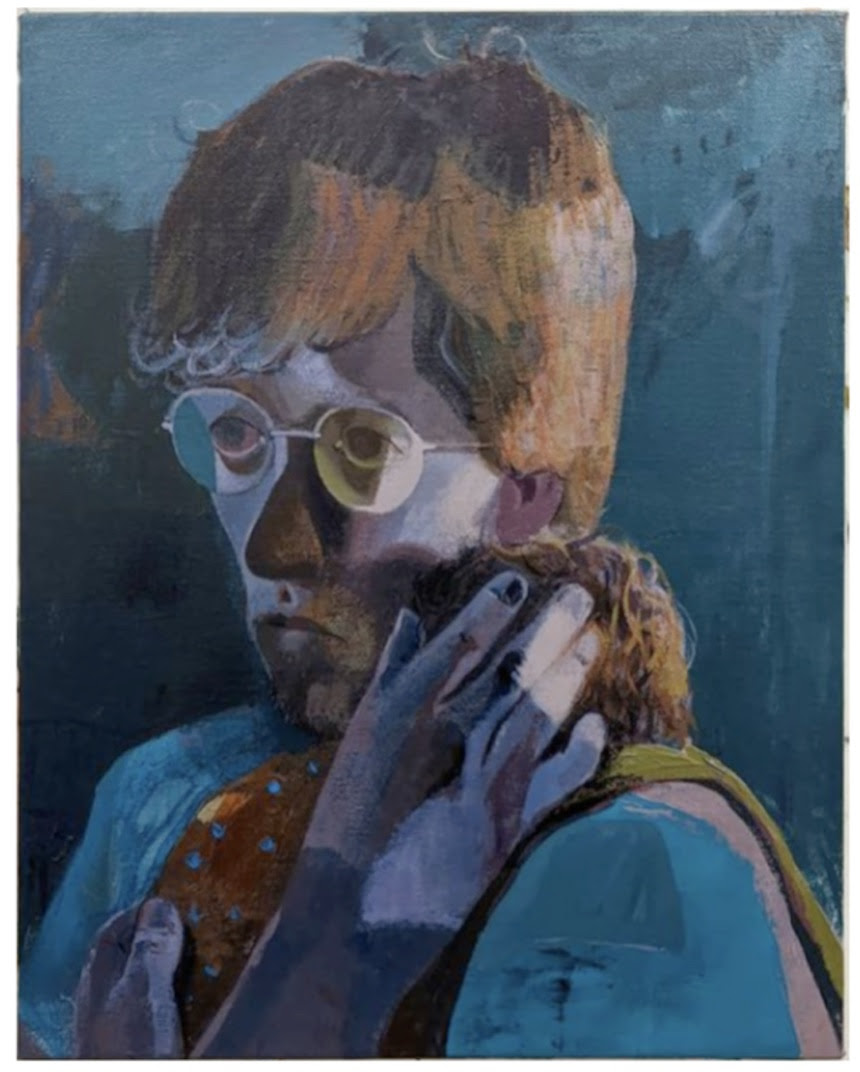 Open for drop-in visits on Saturdays 11-6, and Tuesday-Friday by appointment.

'New Iconography: Artists Raising Children' contributes to an evolving discourse about art and parenting by examining artists’ responses to parenthood, investigating and critiquing existing cultural dogma. Throughout art history, the mythology of the artist has refused children. Archetypical artists are cast in the mold of Vincent Van Gogh, consumed by painting and loneliness, or Agnes Martin, living and working in mystical isolation. If a great artist has a family, it is generally expected that he (it is always a he) neglects them: Pablo Picasso and Lucien Freud are not men you want for a father or husband.

Covid-19 has demolished the canard that serious work requires devotion incompatible with family life. We can no longer entertain the belief that raising children requires a total sacrifice of any other endeavor. With the pandemic’s interruption of virtually all previous forms of childcare and education, work must be integrated with family as never before.

For artists in particular, parenthood has been taboo because Western cultural mythology wants artists to be shamans, enfants terrible, wild and untamable. Creativity is supposed to bubble forth in extremis, outside the parameters of “normal” life. Artists are not supposed to be domesticated, they are not supposed to change diapers or get their kids to bed on time. The term “breeder” is an insult originating in and specific to the creative community.

The focus of this exhibition is on artists for whom becoming a parent constitutes an inflection point, one that stimulates a specific work or an entire body of work. Through development in subject matter, materiality, visual language, or touch, something changes in response to the arrival of children and the complexities of raising them. The artist-parents gathered here inhabit a wide range of career stages, some enjoying commercial success and critical acclaim, others whose work has yet to be widely recognized. A diversity of domestic circumstances is represented, from the artist being the family’s primary wage earner (and whose partner therefore occupies the principal caretaking role), to not having a partner involved, or to having a partner who works a full-time job, requiring the artist to juggle child-raising with the studio.

A number of the artists examine family by considering their role as children rather than as parents. Eleanor Antin’s Domestic Peace (1971-72), a groundbreaking work of feminist art, looks at her relationship with her mother through excerpts of their conversations, exposing the complexity and absurdity persisting in family bonds even into adulthood. Edgar Arcenaux also trains his eye on his mother in his video I Told Jesus, Change My Name (2012): the work is a delicate dance between mother and son as they share authority, she as the parent and he as the director. Arcenaux’s An Arrangement Without Tormentors (2003-2006) looks tenderly at Charles Gaines, his former professor and a patriarch of Los Angeles artists.

Many of the artists reflect their parental role in their art, in some cases directly. Matt Bollinger’s paintings of fathers holding their children are so tender they squeeze the heart. Patty Chang’s quilt Things I Am Scared Of (2018) transforms a household icon of comfort into a plainspoken repository of her maternal anxieties. In Paul McCarthy’s canonical Family Tyranny/Cultural Soup (1987) the artist incarnates dark fears of patriarchal authority by personifying them himself, with his characteristic blend of humor and horror. The couple Victoria Fu and Matt Rich turn a symbol of domestic labor into art with their psychedelic apron-like work, Thirteen Holes (2018). Julian Hoeber’s Brutalist Dollhouse (Transitional Object) (2017) envisions a quintessential childhood fixture through the lens of his own deep immersion in architecture, while his A Head of the Game (2017-18) deploys the language of trompe l’oeil painting to create a self-portrait of an artist with baby-on-the-brain. For Rebecca Niederlander, whose installation transforms the exterior of the Landing during this exhibition, art reflects fundamental family dynamics: the elements of her works are in a state of precarious tension. Her site-specific work here is built upon the triangle, mirroring Niederlander’s own family of two parents and one child. Safe Passage (2021), her sculpture within the gallery, is based on the idea of a lighthouse, a guardian structure, built from wood scraps that Niederlander regards as orphans she gathers together and gives a home in her work.

Day to day life with children is investigated by several artists who absorb their children’s worlds into their art. Harry Dodge’s video Big Bang (Song of the Cosmic Hobo) (2016) is inspired by a home movie of his son wearing a homemade robot costume (both videos are on display here). Daniel Gerwin’s hybrid bas-relief/collage painting Gates of Sleep (2020) looks at his children’s sleep, dreams, and the world of imagination. Catherine Opie’s photograph of her son Oliver in the bathtub is both a beautiful record of a fleeting moment and a link to art-historical images of bathers, recalling especially Bonnard’s portraits of his wife Marthe in her bath. Amanda Valdez keenly observes her toddler’s milestones, with charcoal drawings inspired by a potty, and Big One (2020), a work on canvas celebrating her child’s first steps.

Politics becomes more urgent as parents worry over the world their children will inherit. Political experience may be filtered through the lens of parental responsibility, as in Tony De Los Reyes’s Jacumba Song paintings (both 2020), based on photographs he takes in the desert along the US-Mexico border. He has taken his son with him several times while developing his Border Theory project, of which these works are a part (the artist’s great-grandmother crossed the border illegally). Amir Fallah’s We Do Not Own The Freshness Of The Air (2021) belongs to his newest body of work, in which each painting communicates an important value that Fallah would like to pass to his young son. Catherine Opie’s Purple Finger (2005) marks Afghanis’ commitment to voting, asserting the importance of electoral participation as another means of protecting one’s children and advocating for their futures. Umar Rashid digests the politics of colonial history using imagined narratives marinated in a brew of humor, science fiction, comic books, mythology, and word play. He uses his young son’s drawings directly in Baselitz Basilisk (2021), and often solicits advice from him about what elements to add to an image.

Being a parent is a deeply physical experience, particularly for birth-mothers, who carry a baby for nine months and go through the extremity of labor and delivery. Loie Hollowell’s Point of Entry (blood-orange moon over orange sac) (2017) circles around and through the body, considering sexuality and pregnancy as bases for visual abstraction. Similarly, Heather Rasmussen’s photographs work with her own form to foreground fecundity and sex. Untitled (2017) records her fully pregnant figure, using mirrors to multiply her legs, breasts, and belly, expanding her body to the realm of Hindu deity. In Untitled (2018) Rasmussen entwines snake squash around her lower legs to create a seductive tableau reminiscent of Leda and the Swan. Alison Saar, too, makes the maternal body mythic: Lunarseas: Sea of Nectar and Lunarseas: Sea of Fecundity (both 2008) take the breasts and belly as magical fonts of procreation. JB Blunk created his first Madonna sculpture for his wife and later made a series of these works for collectors. The sensuous and intimate form references the iconic composition of mother and child and the female body.

The artists assembled here make plain that parenthood does not function as an obstacle to making art, but is additional (and sometimes central) material to be mined. This exhibition models the possibility of a new iconography, one that would include Susan Rothenberg switching from oil to the water-based medium flashe because her baby was in the studio. It would include Elizabeth Murray, Ruth Asawa, Paul McCarthy, or Senga Nengudi, each making brilliant work while managing the responsibilities of raising children.

Motherhood is not the central concern here. Family structure has become sufficiently fluid that a broader language of parenting is needed to replace the current paradigm constructed upon the mother’s biological/sexual identity, not to mention heteronormativity. Admittedly, three fourths of all primary caregivers today are still mothers, but a generation or two earlier it would have been inconceivable that fathers would account for even a quarter of primary parenting. A new discourse must arise that is messier and more fluid, engaging both fathers and mothers as primary caretakers in a wide array of family configurations. The project underlying this exhibition is in some respects aspirational, undertaken in the belief that critiquing our culture and articulating more complete understandings of artistic life may help open society to greater possibilities.