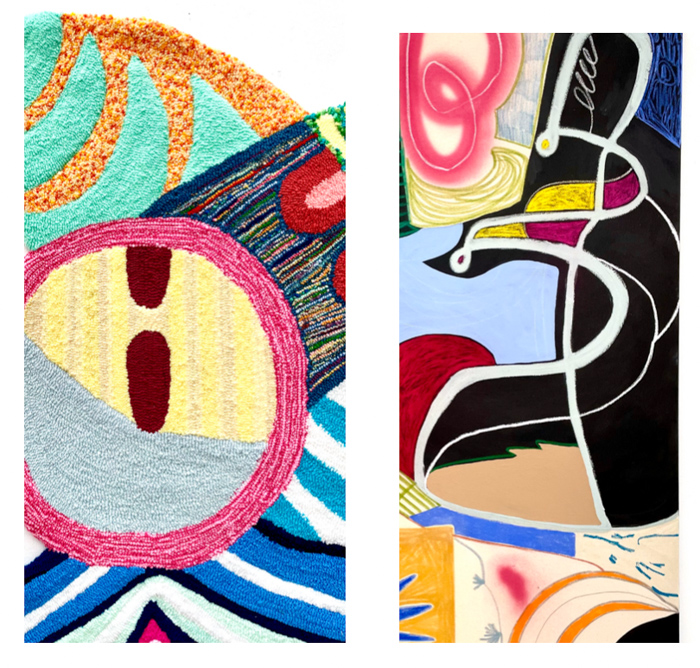 Thai Mainhard is a Brazilian-American painter, based in Los Angeles since 2010, working with mixed media on canvas. Valérie Gobeil is a French-Canadian multidisciplinary artist based in Montreal, Canada, who works with fibers, creating abstract tufted artworks.

For both artists, the interaction between forms, shapes, lines and space, defines their artworks. They are processed based. Once a trace or a mark is done, it calls for the next one. They are complex and bold pictorial compositions that render in a simple language. The use of bright colors and shapes are intuitive, creating a cadence in the tones and combinations, interacting with one another.

Mainhard and Gobeil use different mediums in their creation process. Mainhard uses acrylic, oil sticks, soft and oil pastels, latex and spray paint to create raw and intuitive “marks”. She describes her approach as faith-based, hoping to bring resolution, peace and hope in the midst of chaos. In her artworks, Mainhard explores opposing emotions and the human experiences, emotions, life and loss, in relation with the present moment.

As for Gobeil, she tufts different types of fibers, textures and colors, the same way that she would use paints, pigments and mixed medias, to create paintings made of fiber. It is her pictorial research that most motivates her latest series of works. She keeps pushing the boundaries of shaping the “canvas” by creating more complex contours and playing with the voids. The shapes of her artworks are no longer drawn by straight lines but by curves and unexpected forms. Gobeil uses fiber, rejecting the limits of the traditional expression of the medium, to unveil abstract, geometrical and contemporary artworks.

For both artists, it is their first exhibition in Los Angeles. Thai Mainhard was born in Rio de Janeiro, Brazil, in 1990. In the last year, her works have found strong resonance with a large group of collectors and followers in USA, South America and Europe. She has been featured multiple times on the IG platform @abstract.mag. Her artworks have been exhibited in USA, Italy and Germany, and are part of international art collections.

Valérie Gobeil was born in Montreal, Canada, in 1981. She studied art in Canada and at Ecole des Beaux-Arts in France. Her works have been exhibited in USA, Canada and Europe. They are part of international collections, including the collection of the Government of Canada (Global Affairs Canada).