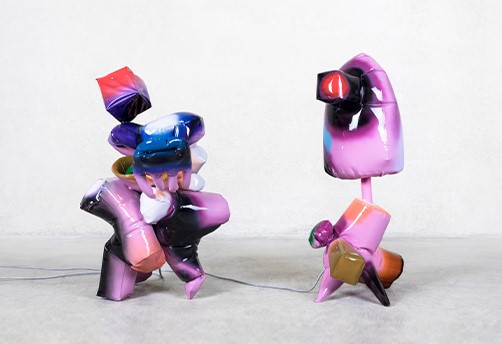 Tuesday to Saturday 11 am - 6 pm at the Little House

Misha Kahn has emerged as one of the leading creative voices of his generation. Through a wildly imaginative approach that embraces spontaneity and non-conformity, Kahn allows the illogical and the irreverent to take over his entire process. He employs everything from lo-fi and ad hoc techniques—such as improvisational molds and collage—to high-tech tools such as virtual reality and robotics.

Born in Duluth, Minnesota in 1989, Kahn graduated from Rhode Island School of Design in 2011 with a Bachelor of Fine Arts in Furniture Design. Soon after, he gained recognition when he was featured in the Museum of Arts and Design's Biennial (2014).

Unafraid to push boundaries, Kahn is determined to question the accepted way of doing things, driving him to self-invent, adapt, and further processes in a myriad of mediums including metalwork, glass, wood, textiles, ceramic, bronze casting, fiberglass, and cement. Voracious to upend traditional techniques, he embraces the opportunity to learn from masters in their respective crafts. Kahn’s acclaimed woven Scrappy series (since 2015), is the result of a collaboration with Gone Rural, a female group of traditional weavers based in Swaziland.

His work has been exhibited internationally and is in the permanent collection of museums such as the Corning Museum of Glass, NY; Dallas Museum of Art, TX; Museum of Fine Arts, Houston, TX and Speed Museum of Art, Louisville, KY.